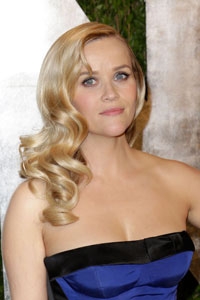 In this week’s Celebrity News…Gwyneth Paltrow is praised for her beauty, Kim Kardashian gets her divorce, Justin and Selena flirt in Europe and Sharon Osbourne reveals the truth about what happened with Ozzy.

Reese Witherspoon post-arrest.
Academy award-winning actress Reese Witherspoon (“Walk The Line”) appears to be dealing with the aftermath of her arrest for disorderly conduct over the weekend with the support of friends. Witherspoon was seen together with Chelsea Handler (“Chelsea Lately”), Cameron Diaz (“Bad Teacher”) and others as they enjoyed a few drinks at the Greenwich Hotel in New York City a few days ago. A few too many drinks actually got Witherspoon and her husband Jim Toth in trouble while driving in Atlanta, GA. When police noticed Toth driving erratically in the wrong lane, they pulled him over and gave him a sobriety test which he failed. But it was while Toth was being arrested and handcuffed on the suspicion of driving under the influence that things took a decidedly ugly turn. Witherspoon reportedly got mouthy with the arresting officers and remained defiant when asked to return to her vehicle. Witherspoon was subsequently arrested and taken to jail, where she and Toth were later released on bond. According to a statement obtained by Us Weekly via her rep, Witherspoon was contrite about her behavior and said, “Out of respect for the ongoing legal situation, I cannot comment on everything that is being reported right now. But I do want to say, I clearly had one drink too many and I am deeply embarrassed about the things I said. It was definitely a scary situation and I was frightened for my husband, but that is no excuse. I was disrespectful to the officer who was just doing his job. The words I used that night definitely do not reflect who I am. I have nothing but respect for the police and I’m very sorry for my behavior.” Witherspoon, who is currently promoting her new movie, Mud, also starring Matthew McConaughey (“Magic Mike”) is due to appear in court on May 22 for a hearing.

Gwyneth the most beautiful.
Actress Gwyneth Paltrow (“Country Strong”) graces the cover of People magazine as the World’s Most Beautiful Woman in their latest issue. The title should put her detractors at Star magazine on notice, as it was just a week ago that the publication ranked her in a poll as one of the most hated celebrities in Hollywood. The beautiful and very busy, Paltrow has been quite the newsmaker, sitting comfortably in the headlines over the last year for several reasons. The actress’s face and figure have perplexed celebrity watchers who marvel at her ability to stay youthful and keep fit. As well, Paltrow’s new book, It’s All Good: Delicious, Easy Recipes That Will Make You Look Good and Feel Great debuted to much critical acclaim, in part because it followed Paltrow’s alleged comments on feeding her children a low-carbohydrate and gluten-free diet. Fans of Paltrow can look forward to her role as Pepper Potts in the upcoming “Iron Man 3” sequel on May 3.

Clint Eastwood’s wife in rehab?
Dina Eastwood (“Mrs. Eastwood & Company”), wife of Oscar-winning actor and director Clint Eastwood, has reportedly checked herself in to an Arizona rehab facility for depression and anxiety. According to TMZ, Eastwood is not seeking treatment for substance abuse.

A peaceful end for Kim and Kris.
The war over wedding semantics has finally ended for Kim Kardashian (“Kourtney & Kim Take Miami”) and Kris Humphries! Humphries, who was married to Kardashian for all of 72 glorious days, ended his bid to seek an annulment based on marriage fraud and is reportedly happy to be done with it all. The basketball star and his famous reality star soon-to-be ex-wife have been battling for a divorce for close to a year and a half, but reached a settlement in a Los Angeles courtroom last week, after a judge reportedly found Humphries’ grounds for an annulment baseless. Kardashian, who is expecting her first child with current boyfriend Kanye West, was spotted indulging in a bit of retail therapy shortly after, while on the East coast, Humphries prepared for the NBA playoffs with his team, the Brooklyn Nets.

Lindsay Lohan’s last-minute pre-rehab newsflash.
As Lindsay Lohan (“Liz & Dick”) prepares for her court-ordered rehab sentence, several claims about the actress surfaced this week. Gossip writer Nik Richie alleges in his new memoir that he saw a scantily-clad Lohan snort cocaine off her wrist while inside a Miami nightclub bathroom. Lohan, accompanied by her then-girlfriend DJ Samantha Ronson in 2008, was reportedly paid a $25,000 appearance fee and, according to Richie, did not seem to care who saw her drug use. Meanwhile, a former friend of Lohan’s named Sam Magid is facing a sexual battery lawsuit filed by Shauna Sand (“Leave It To Lamas”), the ex-wife of actor Lorenzo Lamas (ex-Hector Ramirez, “B&B”). Magid once accused Lohan of theft, but later recanted his story. Sand alleges that on her first day of work as Magid’s assistant, Magid grabbed her and demanded that she have sex with him. As she struggled to free herself, Magid reportedly threw money at her and later sent her threatening text messages.

Tantrum-throwing Tara Reid?
Actress Tara Reid ("American Reunion") reportedly threw a hissy fit in a Los Angeles clothing store after being denied her 'celebrity discount'. According to The New York Post, Reid was shopping at the trendy All Saints boutique for an outfit to wear to the Coachella Music Festival, shortly before she got into a verbal altercation with one of the store's employees. Reid reportedly enjoys considerable markdowns on All Saints fashions at their U.K. and Paris locations and was not very pleased to hear that she'd have to pay the full price this time around. Reid's reaction was reportedly so over-the-top that she had to be escorted out by store security.

Happy anniversary to LeAnn Rimes and Eddie Cibrian.
Congratulations to LeAnn Rimes and Eddie Cibrian ("CSI: Miami," ex-Matt Clark, "Y&R"). Rehab seems to have smoothed out country singer Rimes' insecurities and guilt as she and her husband celebrated their second anniversary in Toronto where Cibrian is filming his latest movie, "The Best Man Holiday." Last year, Rimes spoke to Katie Couric ("Katie") during a special edition of "20/20" titled "All Access Nashville" about her 30 days in rehab following the intense public scrutiny of her extra-marital relationship with Cibrian.

Khloe Kardashian out.
It appears that Mario Lopez (ex-Dr. Christian Ramirez, "B&B") will be returning this fall for the third season of "The X-Factor," minus his former co-host Khloe Kardashian ("Keeping Up With The Kardashians"). Kardashian was not asked to return to The X-Factor, leaving Lopez to helm the show solo – although that too has yet to be confirmed. Kardashian follows L.A. Reid and Britney Spears who exited the show earlier this year. Rumor has it that Grammy award-winning R&B singer/songwriter Ne-Yo may be negotiating a third spot on the four-panel judges table that currently only features singer Demi Lovato and show creator Simon Cowell.

Selena Gomez and Justin Bieber reconnect?
Just as fast as it went up, it came down – perhaps almost as quickly as Selena Gomez ("Spring Breakers") and Justin Bieber broke up and then made up, or so the rumors would have us believe. Last week, reports surfaced that it was no mere coincidence that Gomez was spotted in Norway where Bieber was due to give a concert as part of the European leg of his Believe tour. Soon after, Bieber posted an intimate photo of himself and Gomez on Instagram. However, that photo quickly disappeared. Since their breakup early this year, both Bieber and Gomez have reportedly been staying in touch via late night visits and short outings, despite Gomez announcing that she was single last month. Reps for both celebrities are staying quiet, making us all even more curious as to what's going on. Bieber currently makes a cameo in Will.i.am's video for his single "That Power" and has recently unveiled his latest tattoos – an angel and a tiger – on his left arm.

Sharon Osbourne speaks out.
Sharon Osbourne ("The Talk") recently opened up about the state of her marriage to Black Sabbath rocker Ozzy Osbourne, following his revelations of alcohol and prescription drug abuse on his Facebook page. Last week, there were conflicting reports that the Osbournes were on the verge of a divorce, however Osbourne addressed the rumors on The Talk earlier this week, saying that while she was aware of her husband's escalated drinking, she did not know about the drug use and was devastated to learn of his relapse.

Kendra's close call.
Former Playboy playmate Kendra Wilkinson ("Girls Next Door") was briefly hospitalized following a head-on car crash that left her with minor injuries. Wilkinson, who was recently sacked from the reality show "Splash" was driving her black Audi when she collided into another car while attempting to make a left turn, according to TMZ. Both vehicles suffered extensive damage. Wilkinson expressed her relief and gratitude on Twitter.

Thank you for all well wishes. Just really reminded me how fragile life really is and how important love really is.

Lauryn Hill's sentence delayed.
Singer Lauryn Hill may still be facing jail time for tax evasion, but she'll have a few more days to wonder about it. At a recent hearing, a federal court judge admonished Hill for financial neglect of her tax duties over three years and announced that her sentencing would be postponed until May 6. Until that time, Judge Madeline Cox Arleo said she expected Hill to repay the amount she owes, which could be over $1 million. Lawyers for Hill, who has six children, will reportedly try to seek a more lenient sentence of probation for her, despite Hill pleading guilty to the charges. Hill is also reportedly being sued for eviction by her landlord for failing to pay rent on her New Jersey mansion.

Allison Sweeney's shapely cover.
Allison Sweeney (Samantha Brady, "DOOL," "The Biggest Loser") appears on the cover of the May issue of Shape magazine this week. Sweeney shows off her tight physique in a red string bikini and shares her secrets to staying slim and fit, including her diet and workout routine, as well as her training and completion of several marathons and a triathlon in the past year.

Only one episode left! Catch all the heartbreak and hook-ups in the Hart Of Dixie preview in this week's Soaps.com Primetime Dish. Gwyneth Paltrow and Allison Sweeney make beautiful cover models but these actresses are busy mothers too! Check out who else is part of this elite list in Celebrity moms who do it all.