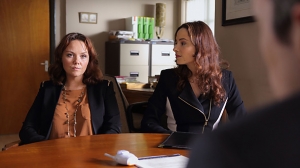 Out of control on Hollyoaks. (E4)

Carla has a hard time convincing Peter to work with Rob on “Coronation Street.” Sharon’s painkiller addiction could drive her over the edge on “EastEnders.” Rachel faces the fallout at the factory on “Emmerdale.” An angry Ste returns to “Hollyoaks.” Dexter has another seizure on “Home And Away.” And the Turner boys learn what fate will befall them on “Neighbours.”

Coronation Street:
Spoiler alert: Anna starts to worry that Gary has been spending too much time with Tina. Across the street, David and Kylie inform his family that they are having a girl. How will Nick react? Facing the prospect of losing Paul forever, Eileen realizes she’s made a horrible mistake but may not be able to save her relationship.

Meanwhile, shaken with guilt, Karl gets desperate and proposes to Stella. Leanne doesn’t waste time telling her mom that accepting his offer would be a mistake. Karl is furious and gets menacing. Leanne is shocked. However, Stella needs her daughter more than ever and begs her to bail the Rovers out of its financial problems.

EastEnders:
Spoiler alert: Janine and Michael battle over custody of Scarlett. He gets desperate when he looks like he’ll lose out. Alice tries to talk him out of doing something stupid. He does his best to keep himself calm but Janine won’t stop pushing his buttons.

Lister trashes Bianca’s parenting skills so she lashes out at him. Meanwhile, Lola tries to cheer Billy up after everyone forgets it’s his birthday. She has more on her plate though, like Sharon’s secret. She’s left with a hard choice to make when confronting the truth could mean sending Lexi back into care.

Emmerdale:
Spoiler alert: Priya gets the truth about Archie’s father and she is shocked. She’s not the only one. The village is full of more gossip than usual. When Nikhil finally hears what’s been going on, he’s astounded. And Kerry is in for an unpleasant surprise when Amy tells her how things ended with Andy.

Robbie ruins Megan’s plans when he refuses to move in to Brook. However, Vanessa winds up moving in instead. Meanwhile, Declan’s plans for the land hit another problem and he decides to take his frustration out on Jai. And Chas is on Cameron’s trail as he prepares to move the body.

Hollyoaks:
Spoiler alert: Kevin feels the brunt of Ste's revenge when he takes a beating from him. Ste settles back into town fast, declaring that he wants to sell his part of the butcher's and buy the club. He'll need even more money to do that, and that leads to him making some questionable deals.

Maxine Minniver is accidentally drugged at a rave and heads to the hospital after the police crackdown. In spite of all that upcoming chaos, the cast still found the time to make this comical video:

Home and Away:
Spoiler alert: Bianca and Heath decide it is time to get married... then they change their minds. Meanwhile, Maddy and Spencer split up and John is feeling lost without Gina. His worries about looking after Jett take a turn for the worse when he receives a letter about the adoption.

Sasha and Rosie meet another one of Mullens' victims, which only makes Sasha more paranoid when one of Mullens' cohorts takes an interest in Rosie. And Ricky sends a load of money to Connie's account on the sly.

Neighbours:
Spoiler alert: Paul's plot to use Rhiannon falls apart when she leaves town and him in a heap of bother. Chris is bothered by his distrust of Mason, who is busy worrying about his problems with Kate.

Kyle and Georgie's attempts at romance keep flopping but he still plans to make their relationship work, no matter how much work actually seems to get in their way. Meanwhile, Steph is disrupting Lucas and Vanessa's relationship but Vanessa isn't going to take it lying down.

Relive some of the richness of Daytime's history in Soaps.com's Reflecting on Soaps Of The Past. And then find out what Eric has to say to Father Matt about Nicole on "DOOL" in our Soap Opera Spoilers.