Reflecting on Soaps Of The Past 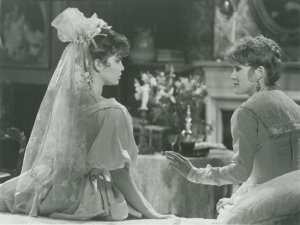 With beloved Daytime shows OLTL and AMC returning April 29, we can’t help but think of the soaps we probably won’t ever get the chance to see again.

Despite the dwindling number of Daytime shows – at one point there were shockingly 19 soaps on the air each day – we love them just as passionately now as we did then. Soaps have come a long way from 15-minute live spots promoting actual soap, but the connections they make between characters and fans are as strong as ever.

Dark Shadows:
More “Twilight Zone” than the typical Daytime fare, Dark Shadows set the bar high when it came to melodrama, thanks to its over-the-top gothic musical score and supernatural storylines. Despite the drama, numerous on-camera bloopers earned it the nickname “Mic Shadows,” courtesy of unintentional boom microphone appearances and wobbly sets.

The Edge of Night:
The Edge of Night was the perfect mix of mysterious intrigue, mobster mayhem, and love gone wrong – a combination that clicked with viewers for nearly 30 years. Unlike fans of “AMC” and “OLTL” who are getting a second chance at their shows, “The Edge of Night” ended with a cliffhanger because the producers thought they could get someone else to pick it up. Fans stopped waiting a long time ago.

Loving:
ABC’s current character crossovers are nothing new to the network. During its 12-year run, Loving had many crossover moments with “All My Children,” which was easy considering they were taped in the same building. Character Ally (Laura Wright) was a big fan of “AMC,” and Jeremy Hunter (Jean LeClerc), Trevor Dillon (James Kiberd) and Angie Hubbard (Debbi Morgan) where characters on both shows. “General Hospital’s” Cesar Faison (Anders Hove) even stopped by in 1993.

Port Charles:
Love them or hate them, vampires were real in “General Hospital’s” alternate universe of Port Charles, and Michael Easton really sank his teeth into the role of Caleb Morley – and the neck of his hot young co-star Kelly Monaco (Livvie). Fun fact: Lynn Herring (Lucy Coe) and Wayne Northrop (Rex Stanton) were married on the show and are still married in real life.

Ryan's Hope:
Before Grant Show smoldered on "Melrose Place" and Yasmine Bleeth donned the famous red bathing suit on "Baywatch," they were supercouple Rick and Ryan on Ryan’s Hope, which had lots in common with returning "OLTL." Soon after it was cancelled, the last version of the Ryan's Bar set was used as a club in Llanview. They also shared a finale date. "OLTL" concluded its first run on January 13, 2012 - exactly 23 years after "Ryan's Hope" ended.

Santa Barbara:
For just under a decade from 1984 to 1993, the bronzed bodies of the wealthy Capwells and Lockridges on Santa Barbara held us totally captivated, and even won 24 Daytime Emmy awards during its short run. Most of the original characters had been written out by the finale, but it was filled with familiar Daytime faces anyway, including Jack Wagner, Eileen Davidson and Sydney Penny.

Search For Tomorrow:
Before she created the world of Pine Valley, Agnes Nixon had a small hand in the beginnings of 1951’s Search For Tomorrow, which ran for 35 years across two networks. Famous faces who had a stint in Henderson include Kevin Bacon ("The Following"), Angela Bassett ("Waiting To Exhale"), and even Viggo Mortensen ("The Lord Of The Rings").

Sunset Beach:
It wasn’t all fun in the sun for fans of Sunset Beach, considering the show didn’t quite make it to two years on the air. While the storylines on "Sunset Beach" started out in line with other soaps, it wasn’t long before it delved into outlandish territory. Who could forget Terror Island? When NBC cancelled "SB" it was replaced with an even more outrageous soap - "Passions."

Try and keep up with the marital status of Sharon and Ozzy Osbourne in Soaps.com’s Celebrity News. And find out the air date for AMC’s Breaking Bad finale.