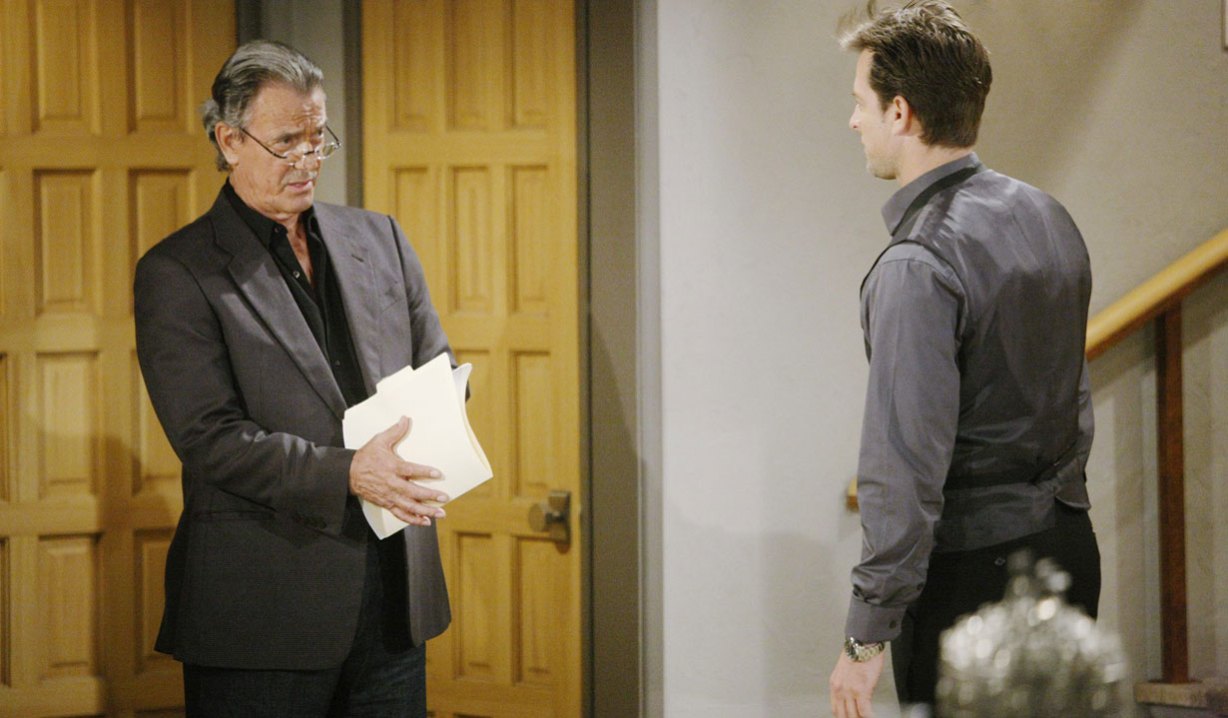 These dynamic duos in our soaps are memorable.

Soaps.com compiled a list of the top ten most memorable, interesting, and/or dynamic father and son combinations from the remaining six soap operas, All My Children, Bold and Beautiful, Days of our Lives, General Hospital, One Life to Live, and Young and the Restless. No offense to Victor’s firstborn son, Nick Newman, but he isn’t nearly as much like his father as Adam Newman turned out to be (even though Victor didn’t raise him). It’s that similarity – the ruthlessness and cutthroat business acumen, tempered by deep feelings about family – as much as their twisted history that made the dynamic between Victor and Adam so enthralling. Love ’em or hate ’em, their scenes are must-see TV. The idea of Victor and Adam getting along gave us the warm fuzzies, but when they faced-off it was fantastic.

John Abbott, the patriarch of the Abbott clan, was a man of values who cared deeply about his children and the family cosmetics business. John’s untimely death was felt keenly by the Abbott siblings. In fact, John and his son, Jack Abbott’s bond was so fundamentally important that John still appears to Jack from beyond the grave to act as his moral compass. Not that they didn’t have their ups and downs. They often disagreed about business tactics (and still do!), and didn’t always see eye-to-eye on their personal lives either. Jack’s dislike for John’s last wife, Gloria, was immediate and still continues. But their taste in women didn’t always differ – who remembers Jack sleeping with Jill when she was married to John? Yike! Patriarch Eric Forrester, and his son Ridge, ran the Forrester Creations fashion empire together; always a dynamic designing duo, even after learning that Ridge wasn’t actually Eric’s biological son and that Massimo Marone. At work, Eric seemed to favor Ridge over his biological son, Thorne, and younger son Rick (who only got a taste of more responsibility once Ridge left). Even though Eric and Ridge both married Brooke more than once, and sometimes disagreed over Eric’s treatment of Ridge’s mother, Stephanie, their relationship always weathered the storms. In semi-retirement Eric continued to defer to Ridge where Forrester Creations was concerned until Ridge’s recent decision to stay overseas.

Whether blackmailing each other or working together, there’s never been a dull moment with Stefano Dimera and EJ DiMera. Their relationship has been a roller-coaster ride since EJ first hit town trying to kill John Black to gain Stefano’s favor. Since then they’ve had a love/hate thing going on, finding all sorts of reasons to reject one another and then reconcile (or at least use each other) in the name of family. Their interactions are often like a dance, as one can never quite take the other at face value. One thing is certain – these two powerful DiMera men shake-up Salem on a regular basis.

With his other son, Bo Brady, on the police force, former drug lord Victor Kiriakis had high hopes for his son Philip Kiriakis to become his ‘mini-me’. Philip ran Titan and acted as Victor’s right-hand in dealings involving rivalries, but sometimes fell-short of Victor’s exacting standards. Philip even wound up having to compete with Brady for his father’s attention and approval. Ultimately, the Kiriakis men had each other’s backs and put family first, with Philip even choosing loyalty to the clan over his love for Stephanie. Philip took his own son, Parker, to live in Chicago, but it was revealed that Parker is actually Daniel Jonas’ son, so we’re waiting for him to return to the fold! Lucky Spencer started out in life with his family on the run, and looked up to his father, Luke Spencer, who taught him everything there was to know about life, loyalty, and survival. That all changed when Lucky found out Luke had raped Laura back in the day and hated him for it. Lucky eventually forgave Luke, but their relationship from then on was on/off. They never lost their bond, but definitely suffered disillusionment with one another throughout their many trials and tribulations.

It’s hard to believe both Edward Quartermaine and Alan Q are now deceased, but their father and son antics and disagreements in the Quartermaine mansion provided viewers with solid drama, not to mention comic relief, for many, many years. Who can forget the tone Alan used when he called Edward, “Father,” or how Edward would sneer at Alan during their epic arguments, which usually ended with one of them waving the other away dismissively with a hand as they left the room. Edward and Alan won’t soon be forgotten, and their unique dynamic won’t easily be duplicated.

Adam Chandler and JR Chandler share one of the most difficult and tumultuous father and son relationships on our list, however, no one could ever say that JR wasn’t wanted. In fact, Adam set out to seduce Dixie in the Chandler boathouse solely with the intention of creating an heir. Unfortunately for Adam, Tad wound up raising Junior for the most part, with Adam and JR really only getting closer following JR’s difficult teenage years when he began acting more ‘Adam-like’. As an adult, JR joined his father in working at Chandler Enterprises, and sometimes lived in the Chandler mansion, but they butted heads often, with Adam’s controlling behavior and meddling usually being an issue. Not that JR was blameless – anyone remember Annie? Dr. Joe Martin and his wife Ruth adopted Tad when he was just a child. A moral family man, Joe saw Tad through much wild behavior in his youth – including breaking the law and numerous affairs with women. Joe was always there as a loving adviser. Tad got married (several times) and became a father himself, and the sweetest part of this father and son story is that Tad became the same type of father to his own children – always there with solid advice, comfort, humor, and love.

We’re totally cheating having two more, but no soap opera father and son list would be complete without Asa Buchanan and his boys. Asa was a grumbling, rough-and-ready patriarch who had a different dynamic with each of his sons. Clint wore a cowboy hat like Asa back in the day and was involved in the family business, while Bo’s work sometimes put him on the opposite side of the law from his ‘Pa’ – he even arrested him a time or two. That said, Bo and Clint both spent their fair share of time trying to keep Ol’ Asa from acting up, meddling in their lives, and dealing with the aftermaths of his numerous schemes – all in the name of family.

Who is your favorite soap opera father and son duo? Let Soaps.com know, and tell us why, in the comment section below. If there’s another duo that we haven’t mentioned, please let us know.