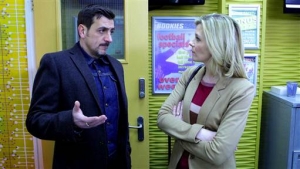 Katy and Chesney’s relationship continues to be rocky on “Coronation Street.” Someone new is coming to “EastEnders.” Amy kisses Gavin to make Andy jealous on “Emmerdale.” Will needs some help on “Hollyoaks.” Heath tries proving he can be a parent on “Home And Away.” And Kyle has bad news for Rani on “Neighbours.”

Coronation Street:
Spoiler alert: Leanne wants Peter to buy her out of the bookies but he’s nearly broke. She threatens to take over the business before he destroys it. Peter is even more annoyed when he discovers that Carla has bought up Leanne’s shares. Meanwhile, Tommy starts to suspect that Gary has more than friendly feelings for Tina after he tracks down her father’s old wedding ring.

Mary manages to impress the still grieving Dev with her skills as a nanny. And Faye is disappointed that Tim isn’t spending more time looking after her and would rather be down at the pub.

EastEnders:
Spoiler alert: Joey’s miffed with Lauren, which sends her on a bit of a bender, but Max seems to be coming around to Kirsty’s news that he is going to be a father yet again. She still wants to keep it a secret. Also keeping secrets: Ian swears Jean to secrecy when he plans to open a new restaurant. And Liam is making the Butcher’s a bunker as he hides out in fear of a gang attack.

Cornell S. John will be joining the cast as Sam, the long lost father of Dexter. Look for him to show up in May. In more casting news, Ray Dixon (Chucky) will be leaving the cast in June.

Emmerdale:
Spoiler alert: After hearing about Declan’s plans for the woods, Cameron heads out to do some digging and cover his tracks. Little does he know that Chas and Gennie are following him. Back in town, Declan has to face the fact that Steve has plans of his own for the woods.

Alicia asks Dom out. Meanwhile, Sam agrees to move back in with Rachel so they can give things another shot and Paddy tells Vanessa where she should go.

Hollyoaks:
Spoiler alert: Dodger's day continues to go downhill. He's not alone, Tom's day doesn't get any brighter when he hears that Clare is back. She wastes no time coming around to taunt him. And Carmel could be facing heartbreak when Myra decides it's time that she knew the truth.

Dr. Browning plans to rescue Mercedes, but he could be doing more harm than good. He winds up fighting for his life. And Texas' hen do gets underway, which threatens to reveal a few unpleasant secrets. The bride-to-be is faced with a difficult choice to make about her wedding.

Home and Away:
Spoiler alert: Zac feels betrayed when he learns that Natalie has been turning to Brax for comfort. Taking advice from Liam, she decides to cut all ties with the Braxton's. Meanwhile, Romeo still hasn't come clean with Indi about his condition. It could be a hard secret to keep when Dex runs into him at the hospital.

After being caught making out with Spencer, Maddy has to face a barrage of sex advice which leaves her confused. Meanwhile, Dex and April try to be 'just friends' as he attempts to help her cope with OCD. That doesn't quite pan out.

Neighbours:
Spoiler alert: Robbo's plans for the robbery go wrong when the security guard shows up unexpectedly. He and Mason flee and try to get rid of the evidence to connect them to the crime. Later, Toadie and Sonya's wedding runs far from smoothly. Rani has a fit about the dress she has to wear to the ceremony, but that's not the worst thing that happens. After a nice little ceremony, the wedding is interrupted by an explosion. Guests are trapped under rubble and some might not make it out.

Sonya wakes up in the hospital with short term memory loss. With all of this grim news around, Scotty tells Georgie that they should just elope and get out of Erinsborough.

Discover what shocking news Elena receives in Soaps.com's Dallas Recap: Legacies. And then discover who is supporting Rick and Maya on "B&B" in our Soap Opera Spoilers.