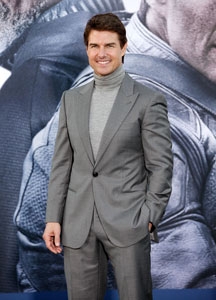 Halle Berry’s unexpected joy.
Last week, with a few whispered words, Halle Berry (“The Call”) managed to talk her fiancé Olivier Martinez (“Unfaithful”) down from a tussle with the paparazzi. This week Berry surprised us all with the news that she is three months pregnant with her second child – making last week’s tense negotiations that much more impressive. At 46 years of age, the excited mom-to-be reportedly told CNN, “I feel fantastic. This has been the biggest surprise of my life to tell you the truth…I thought I was kind of past the point where this [pregnancy] could be a reality for me. So it’s been a big surprise and the most wonderful.” Berry already shares a five-year-old daughter, Nahla with her ex-boyfriend, model Gabriel Aubry.

Also expecting a baby are Kathryn Morris (ex-Det. Lilly Rush, “Cold Case”) and her boyfriend Johnny Messner (“Tears Of The Sun”). Morris joins the over-forty mommy club at 44. This will be her first child.

Tom Cruise stays silent on his divorce.
The latest headlines would have you believing that Tom Cruise (“Jack Reacher”) was just dying to publicly unload the cross he was carrying regarding details about his divorce from Katie Holmes (“Batman Begins”), just five days before his 50th birthday. Reports said, that while speaking to German TV network, ProSieben, Cruise ‘finally’ opened up about his shock and finding a sense of humor following the end of his five-year marriage to Holmes. “I did not expect that,” Cruise was quoted as saying, adding, “Life is a challenge…To be 50 and have experiences and think you have everything under control, and then it hits you — that’s what life is … Life is tragicomic. You need a certain sense of humor.” Did Cruise give the interview in German and his comments were lost in translation or was he reading from an upcoming movie script? A rep for Cruise says that his supposed remarks are totally false and are a complete work of fiction. And according to the German interviewer, Steven Gaetjen, Cruise was never asked, nor did he answer any personal questions. Cruise was in Germany to promote his upcoming film “Oblivion” which releases on April 19.

It’s a new do for Bieber, Williams and yes, Axl Rose!
Not since Jennifer Aniston’s (“Horrible Bosses”) layered locks has a new hairdo created such a stir! Pop star Justin Bieber revealed his newly chopped coif while at a meet and greet for fans while on tour in Europe. The singer sported shaved sides with longer, side-swept bangs. The look is also being spotted on actress Michelle Williams (“Oz The Great And Powerful”) who wore her shorn blond do with only one shaved side. Meanwhile, Guns N’ Roses singer Axl Rose, famous for braiding is dirty-blond metal mane into cornrows, is now wearing a demure golden blond bob. In other news, it seems that the social media statistics company, SocialBakers, is claiming that almost half of Bieber’s 37 million Twitter followers could be fake, inactive or simply empty accounts. Earlier this year, the singer had supposedly knocked Lady Gaga from her two-year reign as the queen of Twitter. But SocialBakers has also speculated a good chunk – at least 15 million – of Lady Gaga’s followers could also be phony.

So Justin bieber is single, he is writing new music and he got his hair flip back. WELL HELLO 2009. twitter.com/BieberTheLucky…

Rob Lowe’s painful profile.
Actor Rob Lowe (“Parks And Recreation”) who plays Dr. Jack Starz, in the upcoming HBO Liberace biopic Behind the Candelabra, has revealed that his plastic fantastic look came at the cost of some serious migraine headaches. According to an interview with Entertainment Weekly Lowe reportedly was transformed into Liberace’s plastic surgeon, using tape, elastic and several wigs – a technique that Lowe adds, was pre-facelift for many forties movie starlets. The movie also stars Michael Douglas (“Traffic”) in the title role of Liberace and Matt Damon (“The Bourne Identity”) as his lover, Scott Thorson.

iPhone wars starring Jenna Jameson, Estella Warren and Jaime Pressly.
Adult entertainment star Jenna Jameson (“Private Parts”) was arrested over the weekend in Newport, CA after she reportedly got into a fight with her assistant several hours before she was due to appear at the Heat Ultra Lounge in Orange County for her own birthday party. Jameson claimed that her assistant, Brittany Markham, tried to rob her. Markham has since applied for a restraining order after alleging that Jameson threatened her and beat her with a brass-knuckled iPhone. Jameson was cited for battery and later released but is expected to appear in court to face the charges on May 17.

Jameson wasn’t the only blonde behaving badly. Actress Jaime Pressly (“My Name Is Earl”) accused Estella Warren (“Planet Of The Apes”) of stealing her assistant’s purse with her precious iPhone. Pressly and Warren were at a mutual photographer-friend’s party in West Hollywood, CA when Warren reportedly walked out of the party with the bag and headed off to the celebrity nightclub Bootsy Bellows. According to Radar Online, Pressly confronted Warren at the club, demanding she return the bag along with her assistant’s iPhone that Warren apparently insisted was hers. While the West Hollywood Sheriff’s Department was called, the investigation remains active. Both Warren and Pressly are no strangers to trouble – both actresses were arrested for driving under the influence in 2011.

No mind, no thought, no reflection, no analysis, no cultivation, no intention… let it settle itself.

Sara Gilbert is engaged!
Sara Gilbert (“The Talk”) gushed to her “The Talk” co-hosts about saying ‘yes’ to a creative and utterly romantic proposal from her longtime girlfriend singer/songwriter Linda Perry. Perry reportedly popped the question to Gilbert by wearing a series of T-shirts which spelled out ‘Will You Marry Me?’ while backed up by a brass brand who played The Cure’s Love Song.

Wesley Snipes released from prison.
After serving nearly 28 months of a 36-month sentence for failing to file and pay his taxes, actor Wesley Snipes ("Blade") has been released from prison. Snipes was convicted in 2008 and was sent to a medium-security Federal Correctional Institution in Pennsylvania in 2010. The actor will remain under house arrest under the watchful eye of the New York Community Corrections office until mid July.

Lindsay Lohan's Letterman stopover.
Despite reports that she recently broke up with her musician boyfriend, Avi Snow, and later failed to appear at a deposition for a battery claim involving her assistant and a paparazzo, actress Lindsay Lohan ("The Canyons") showed up for a heart-to-heart chat with talk show host David Letterman ("Late Night With David Letterman") in good spirits. Wearing a spring-inspired fitted floral number, Lohan became emotional at times during her interview with Letterman, and even admitted that she was looking forward to rehab when she heads in for treatment this May. For his part, Letterman retained his characteristic bluntness as he joked about Lohan's many headline-making, law-breaking exploits in the last year. Check out this clip of Lindsay's Letterman appearance.

Roger Ebert's legacy.
This week, celebrities paid tribute to legendary film critic and writer Roger Ebert ("Siskel & Ebert & The Movies"), who sadly died last week after a lengthy battle with thyroid cancer. Ebert's diagnosis in 2002 and subsequent surgeries later cost him his speech, his ability to eat and changed his appearance, but still he soldiered on. Funeral services for Roger Ebert were held at Holy Name Cathedral in his native Chicago. Ebert's last blog entry seemed to serve as an informal farewell full of gratitude and hope. Director Martin Scorcese ("The Departed") is reportedly producing a documentary on him. Roger Ebert was 70 years old.

"The movies won't be the same without Roger." —President Obama

How does Simon Cowell stay so beautiful?
The last time we checked, Simon Cowell ("The X-Factor") wasn't endorsing any skincare product lines or coming out with a new cologne, but after his most recent reveal – the offers might just start to come in. According to an interview published in the Radio Times, the "X-Factor" judge exercises daily by doing several hundred press-ups and keeps his regular Botox appointments. But it's his alleged 'milk baths' that are reportedly raising eyebrows. Cowell claims that he soaks in a lemon milk bath to soften his skin. Another reported eye-opener? He also takes his vitamins intravenously. Cowell's net worth is estimated at over $350 million.

Shakira's ex wants alimony?
According to TMZ, Latin pop star Shakira's ("The Voice") ex-boyfriend Anthony de la Rua is suing her for $100 million dollars. Rua claims that he brokered several record deals for the singer during their 11-year relationship and is owed some back-pay. Shakira, who recently welcomed her first child with her soccer star boyfriend Gerard Piqué, is not taking the lawsuit lying down, arguing that she was already an established star before her involvement with Rua. Shakira filed her own papers which reportedly deny that Rua ever acted as her manager.

Sharon Stone ("Casino") is also suing her former nanny, Erlinda Elemen, for an unpaid loan plus interest. According to TMZ, Stone and her nanny share no love for each other and have a volatile history. Stone reportedly lent Elemen $12,500 in 2010, but has yet to collect on the remaining $9,500 owed.

Parker Bagley pleads guilty.
Parker Bagley (ex-Jason DiLaurentis, "Pretty Little Liars") has pleaded guilty to misdemeanor petty larceny. Bagley agreed to pay back $7,000 in restitution – half now and the rest due in June – for stealing electronics, including iPads and jewellery from a friend's apartment last October. Had he not taken a plea deal, Bagley could have faced up to seven years in prison. According to the New York Daily News, Bagley was in good humor outside the court, vowing to focus on his music and never commit crime again. "I’m just glad they didn't find the bodies," he said. "I'm committing crimes and trying not to get caught anymore - that's the trick."

Ashton Kutcher is hiring.
Actor Ashton Kutcher ("Two And A Half Men") is on the hunt for writers for his new L.A.-based technology start-up company. While the details are unclear, Kutcher is reportedly looking to recruit university students – specifically English majors – to apply for the position. Kutcher's job posting, seeking creative writers, was reportedly listed on New York's Columbia University job board.

Follow Riley and Lacey as they sniff out the unfaithful in Soaps.com's new The Client List spoiler video in this week's Primetime Dish. A few brawls and bust-ups made for some not-so-pretty mug shots this week. Check out these explosive confrontations in Best Fights on Reality TV.