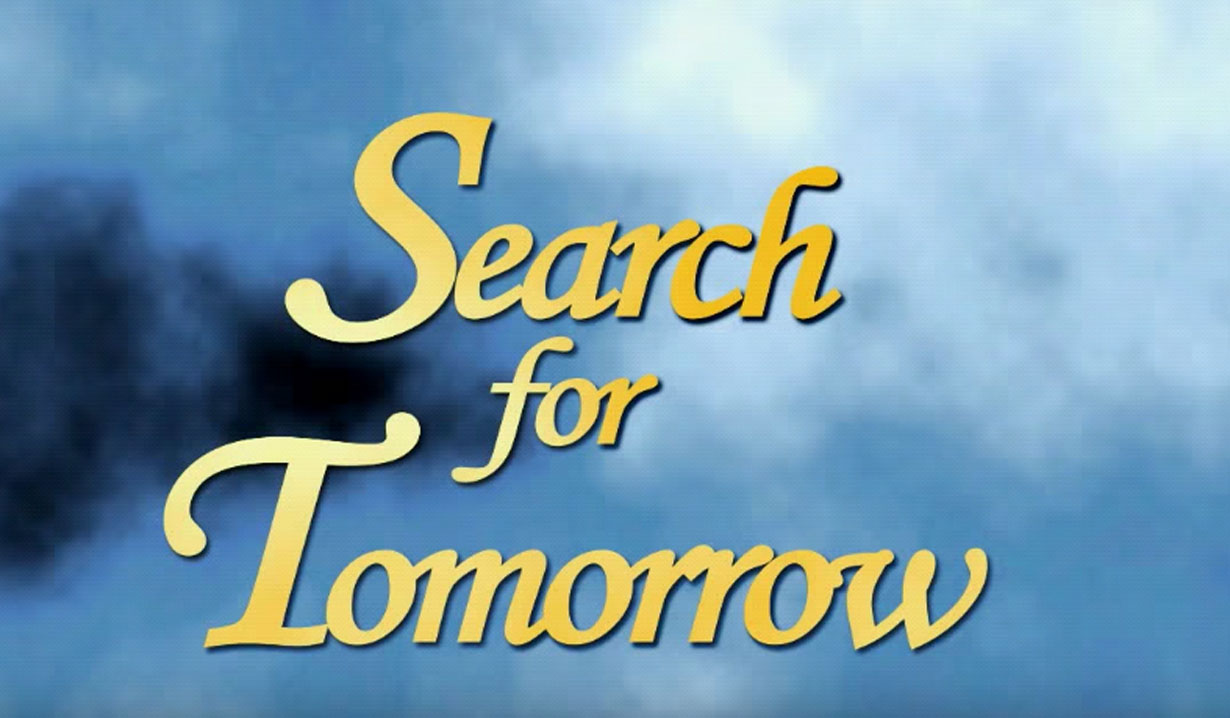 Created by Roy Winsor in 1951, who also launched “Love of Life” that same year, “Search for Tomorrow” paired Winsor with fellow Chicagoan and soap master Agnes Nixon, though she left the show after only a few months. “Search for Tomorrow” premiered as a 15-minute serial sponsored by Proctor & Gamble and remained that way for 17 years until 1968 when it was expanded to 30 minutes. In fact, for almost all of that time, the show was live. By the time it was cancelled, the show had run for 35 years. Soaps.com relives some of the highlights of “Search for Tomorrow.”

The story:
For the entire run of the show, the main focus was on widow Joanne Gardner (Mary Stuart) and her life in fictional Henderson. In the 50s she dealt with many of her problems, usually over a cup of coffee in her kitchen, with neighbors Stuart and Marge Bergman (Larry Haines and Melba Rae). Joanne managed a hotel, tangled with her nasty in-laws and raised her daughter Patti (Lynn Loring). In the 60s she dealt with the death of her son, the death of a second husband and Patti’s rebellious teen years mixed up with drug-dealing gang members. In the 70s, she became blind and married the doctor who cured her, Tony Vincente (Anthony George). Stories to bring in a younger audience included one where a crazed Jennifer Pace (Morgan Fairchild) killed Joanne’s sister after dreaming about it.

More: History of Morgan Fairchild in 90s soap The City

Cast and characters:
Joanne and Stuart were on the show from beginning to end but in between that 35-year run many other characters made their way through Henderson. Actors who appeared on “Search for Tomorrow” at some point over the course of its run include some of the biggest names in Hollywood, such as Don Knotts, Ken Kercheval, Larry Hagman, Susan Sarandon, Kevin Kline, Morgan Fairchild, Kevin Bacon, Olympia Dukakis, Viggo Mortensen, Jane Krakowski, Lee Grant, Sandy Duncan and Angela Bassett.

The switch:
As the ratings declined for the show, CBS was ready to pull the plug in 1982 but Proctor & Gamble wasn’t ready to give up and began to look for a new home for the show. They found it on NBC. The last CBS episode of “Search for Tomorrow” aired on March 26, 1982 and by the next Monday it was on its new network – and in a new time-slot. The new spot now put it up squarely against the mega-hit “The Young and the Restless” instead of getting the benefit of its lead-in. Plus, some affiliates used that slot for local news, causing the show to go away completely in some parts of the country.

As a result, “Search for Tomorrow’s” ratings only got to half as high at NBC as they were when it got axed from CBS, making it the second-lowest rated soap at the time, following “The Doctors.” By 1984 the writers had switched focus to two new families, the McClearys, which included Matt and his twin Malcolm (Patrick Tovatt), Hogan (David Forsyth), Quinn (Jeffrey Meek) and Cagney (Matthew Ashford); and the Kendalls, led by Estelle (Domini Blythe) and Lloyd (Peter Haskell).

But even the infusion of new blood was too little, too late for “Search.” NBC cancelled the show in 1986 but not without one last attempt to bring up the ratings. The entire town of Henderson was washed away in a flood, with only Joanne’s home and business left standing.

The end:
The final episode of “Search” aired the day after Christmas in 1986, with the stalwart Joanne and Stu talking about the future. When he asked Joanne, the heart of the show for 35 years, what she was searching for she replied, “Tomorrow, and I can’t wait.” And just like that it was all over. Afterwards, a taped segment aired in which the cast thanked their fans for their loyalty.

Search for Tomorrow trivia:
* Similar to a scene from the popular movie “Tootsie,” both the master copy and the backup of the August 4, 1983 episode mysteriously went missing, forcing the cast to do a live show for the first time in 16 years. NBC was accused of deliberately pulling the stunt for ratings.

* After the show hit a rating slump in the early 60s, Western drama writers Frank and Doris Hursley were brought on to breathe new life into the soap. They decided to kill off Joanne’s toddler by having him run into traffic but actress Stuart was so upset by the decision she threatened to quit unless the Hurselys were fired. They left anyway in 1963 when they created a new soap for ABC, “General Hospital.”

* The show’s final episode ended with the song “We’ll Be Together Again” by Lou Rawls. The same song was used for the finale of “Love of Life” with that version sung by Tony Bennett.

* When the show switched networks, it was still produced at CBS for a few months until they were moved into the old “Sesame Street” space in New York. Then production was moved to the space left vacant by the recently-cancelled “Edge of Night,” where it stayed the rest of its run.

* In an ad campaign to get viewers to follow the show to NBC, stars from the show asked fans to “Follow the Search” – but were not allowed to say where. Instead, they asked that fans follow them to “another network” but would not say which one.

* In 1974, future “Real World” creator Mary-Ellis Bunim was brought in as executive producer to bring younger viewers in. She was rumored to want to kill off Joanne. Mary Stuart voiced her displeasure in the press and it never happened.