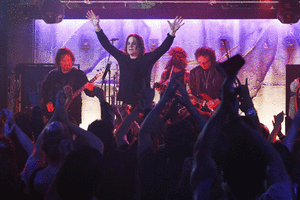 There are some ups and downs in Primetime television during the week of April 15. This week’s Primetime Dish column highlights episode teasers, casting scoops, TNT premiere dates, a “Girls” actor abruptly leaves his role, an A&E series gets renewed, two series’ stars write a couple of upcoming episodes, a Black Sabbath performance, and more…

90210:
A big reveal takes place in the CW’s April 15 9:00 PM episode titled “A Portrait Of The Artist As A Young Call Girl.” Monday Episode Teasers: Annie is forced to admit that she is Author X after Jordan asks Naomi to launch a party for the latest hot writer. Silver worries Adrianna isn’t okay with her dating Mark, and Dixon realizes Michaela has feelings for Navid.

Arrow:
On Wednesday April 17 at 8:00 PM the CW will air a repeat of its February 27 episode titled “Dead To Rights.”

Bates Motel:
Renewed! Not even a month on the air and A&E has green-lighted its drama series for season two. 4.5 million viewers tuned in for its premiere in March, which made it A&E’s most-watched original drama debut in the key demos in the network’s history. Production for the new season, containing ten episodes, will begin later this year and will air in 2014. Tune in Mondays at 10:00 PM.

Beauty And The Beast:
In the CW’s Thursday April 18 9:00 PM episode titled “Heart Of Darkness” Evan confesses his love to Cat. The person who tipped off Muirfield to Vincent’s whereabouts is revealed, and Gabe finds evidence of a department mole.

Californication:
Michael Imperioli (“Sopranos”) has landed a major recurring gig on the Showtime series. Look for him to play television producer Rick Rath in season seven, which will begin production this month with a 2014 premiere.

CSI:
Tim Matheson (“Hart Of Dixie”) will guest star in a two-episode arc beginning in the series finale on May 15. He’ll play Dr. Tate and will again appear in the first episode of season fourteen. Tune in to CBS Wednesdays at 10:00 PM.

In other news… Black Sabbath (Ozzy Osbourne, Tony Iommi and Geezer Butler) will perform a new song during the Wednesday May 15 10:00 PM CBS season finale. Their song, “End Of The Beginning,” is off their new album, which will be released on June 11. “When we first heard that Black Sabbath was interested in premiering a song on ‘CSI’ from their first studio album in 35 years, we were all really excited. So many of us are longtime fans,” said Executive Producer Don McGill. “And seeing as the album is titled ’13’ and this is the finale of ‘CSI’s’ Season 13, it seemed like the perfect match. We couldn’t be more thrilled.”

Dallas:
Back-to-back episodes! Fans don’t want to miss the back-to-back season finale episodes on Monday April 15 at 8:00 PM titled “Guilt By Association” and “Legacies.” Until then read our Dallas Spoilers for the twists and turns leading up to the end of season two.

Franklin & Bash:
The TNT series will return with a two-hour season three premiere on Wednesday June 19 at 9:00 PM.

Games Of Thrones:
In HBO’s Sunday April 21 9:00 PM episode titled “And Now His Watch Is Ended” The Night’s Watch makes preparations. Varys meets with someone. Arya is faced with the commander of the Brotherhood, and Daenerys trades a chain for a whip.

Girls:
Christopher Abbott, who has played Charlie Dattolo since 2012, has unexpectedly left the HBO comedy. The New York Post is reporting that Abbott and his co-star Lena Dunham (Hannah Horvath) had been butting heads.

Glee:
As a reminder, Soaps.com covers the goings on at McKinley High. Tune in each Thursday and read our Glee Weekly Recaps, which are posted after the show airs. Visit our Glee Spoilers to find out what dance is featured in Thursday’s April 18 episode titled “Funny Girl.”

Hart Of Dixie:
It's all about avoidance therapy in the CW's April 16 8:00 PM episode titled "The Kiss." Tuesday Episode Teasers: George and Zoe reluctantly agree to play Romeo and Juliet in a performance of Shakespeare's most iconic scenes just to prove they are over each other. Lemon and Wade take over the reins at the Rammer Jammer but lose all the staff two days prior to opening, and Brick counsels two unlikely people and learns a secret he has been keeping from himself.

NCIS:
Colin Hanks ("Dexter") has landed a two episode arc on the CBS series as Investigator Richard Parsons on May 7 and May 14. Tune in Tuesdays at 8:00 PM.

Nikita:
Broken memories lead to death in the CW's April 19 8:00 PM episode titled "Broken Home." Friday Episode Teasers: Amanda puts a drugged Nikita through a horrific mental conditioning process where Nikita discovers Amanda's deepest secret ever. Alex struggles to save everyone through the escalating violence. Birkhoff and Sean set out to save the women they love, and Owen's newfound memories cause his disturbing actions.

Perception:
The TNT series will return with season two on Tuesday June 25 at 10:00 PM.

Person Of Interest:
On Thursday May 9 at 9:00 PM the CBS series will air its season finale.

Revenge:
View our Revenge Spoilers for details on the May season finale and read our Revenge Recaps, which are posted Sundays after the show.

Rizzoli & Isles:
Premiere date change! TNT has changed the premiere date for season four of its series, which will now air on Tuesday June 25 at 9:00 PM.

Rules Of Engagement:
In CBS' Monday May 13 8:30 PM episode titled "Timmy Quits" Adam has a hard time picking Jeff or Russell as his best man, but they don't understand what all of the fuss is about. Aubrey thinks even after twenty years that Jeff is still denying feelings that a college girl had for him, and Russell disregards Timmy one too many times. Megyn Price, who plays Audrey, directed this episode.

Supernatural:
On Wednesday April 17 at 9:00 PM the CW will air a repeat of its January 23 episode titled "LARP And The Real Girl."

The Client List:
In Lifetime's April 14 10:00 PM episode titled "Unanswered Prayers" Riley thinks about her longtime dream of becoming a singer. Trouble with a fellow inmate could jeopardize Kyle's defense, and Evan and a female cadet grow close. Also, find out who Riley and Lacey suspect of cheating through the spoiler video below.

The Vampire Diaries:
It's prom night in Mystic Falls on the CW on Thursday April 18 at 8:00 PM. Read our Vampire Diaries Spoilers to hear who Caroline asks for help and stay tuned to our recap, which we'll post after the show airs.

True Blood:
Anna Camp ("The Mindy Project") will return as Sarah Newlin for a guest appearance during season six, which premieres on Sunday June 9.

Two And A Half Men:
The CBS series will air its season finale at 8:30 PM on Thursday May 9.

Veep:
In HBO's Sunday April 21 10:00 PM episode titled "Signals" Selina arrives at a pig roast in North Carolina for the president's "Listen To Rural America" proposal, and Dan takes an interest in Pilates in order to get some face time.

Read about who makes a risky move on Hollyoaks and who receives life shattering news.