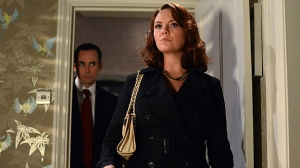 Faye leaves Anna shocked on “Coronation Street.” The Square has a visit on “EastEnders.” Nicola turns to Steve to get her out of a fix on “Emmerdale.” Chris hits on Indi on “Home And Away.” Sophie faces some rejection on “Neighbours.” And Diane’s world is turned upside-down on “Hollyoaks.”

Coronation Street:
Spoiler alert: Katy is stunned to discover Chesney seems to be moving on, which is particularly hard since she just quit her job and gave Ryan the brush off. Meanwhile, Eileen lashes out at Julie after Paul moves out. And Jason has to face the ugly fact that Karl and Stella are together again.

Mary offers to be the nanny for Dev’s kids. Will he take her up on the offer or run the other way? And Izzy isn’t sure how to react when she watches Gary feeling her baby kicking in Tina’s belly.

EastEnders:
Spoiler alert: Janine is back and it promises to cause some upset. She heads straight to her former home and finds her old enemy Kat ensconced there. After a flurry of insults, Kat runs and Janine tells Michael that she’s back for her daughter.

Michael has other things to worry about, like Alice throwing herself at him. Or maybe he’s more concerned about it being awards season? Don’t forget to cast your vote in the upcoming British Soap Awards.

Emmerdale:
Spoiler alert: After she has a go at him, Moira breaks down and tells Cain what she’s been hiding. Once she’s got that off her chest, she heads back to work and gets a pain in her guts. Meanwhile, a drunken Kerry makes an ass of herself at a party that leaves Andy feeling awkward.

Cameron turns to the police for help finding the kids. Chas is looking too but Debbie has no interest in helping her. After Debbie slams a door on her face, Chas gets back at her by chucking some water in hers. Meanwhile, Georgie and Rodney decide to take off together.

Hollyoaks:
Spoiler alert: Desperate to save Mercedes, the McQueens might go too far. Elsewhere, Phoebe and Jacqui prepare to make a risky move but it may be the only way for Jacqui to save her sister, even if it means dooming herself.

Robbie’s attempt to impress Sinead ends up having gruesome consequences that no one was anticipating. She’s faced with having to cover for him to protect them both. And Diane has to face some life shattering news.

Home and Away:
Spoiler alert: The rape charges against Mullens are wiped away but Sasha still isn't shy about letting him know what she thinks of him. Kyle throws some threats at him and then decides to change schools. He starts kissing Tamara. Brax quickly hears about this and decides to give Kyle the boot. And April is desperate to get Dex back but he's busy sleeping with Steph. When April finally tracks him down, he tells her they are finished.

Steve Peacocke (Daryl) won the Most Popular Male Actor at the Logie awards. He went to his hometown of Dubbo to pick it up. Soaps.com sends our congratulations.

Take a look at what else has been happening on "Home And Away."

Neighbours:
Spoiler alert: Robbo is back and looking for some romance. He wants Amber to keep what they are up to quiet but she can't do that for long. She even wants to talk to her parents about him. And Matt thinks he recognizes the burglar of Erinsborough.

Sonya gets a hen night she wasn't expecting. Meanwhile, Toadie's Bucks' party runs into overdrive and ends with some drunken tattooing. Scotty escapes to makes a pass at Chris. When that doesn't go well, he tries to cover it up by lying but Kyle is already into him.

Can Ewing Energies save itself from its business woes? Find out if they are getting close in Soaps.com's Dallas Recap: A Call To Arms. And then discover who will become bedmates on "GH" in our Soap Opera Spoilers.