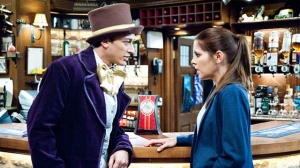 Julie doles out advice on “Coronation Street.” Jack could be close to discovering Sharon’s secret on “EastEnders.” Being a housewife is proving too much for Kerry on “Emmerdale.” Jim tries to win Carmel one last time on “Hollyoaks.” There’s a rape on “Home And Away.” And Lauren’s lies continue on “Neighbours.” Stay in the know with British and Aussie soaps.

Coronation Street:
Spoiler alert: Although Karl is finally near Stella again, his guilty conscience is starting to overwhelm him. Gary and Izzy are overwhelmed when they see the first scan of their baby in Tina’s belly, but Tina feels strangely left out in the situation. Izzy heads over to apologize to Fiz for doubting her story but the redhead isn’t in the most forgiving mood. And Eileen worries about Paul returning to work.

There was a little brouhaha over an imaginary jab from Charlie Condou (Marcus) at his Corrie co-star Antony Cotton (Sean). Condou replied to the Daily Mirror on Twitter by accusing them of blowing up something unrelated into a story that wasn’t really there.

EastEnders:
Spoiler alert: Tanya catches Phil and Sharon getting closer than they should be when she's scheduled to be getting married… to someone else. When the wedding day comes, it's far from smooth as the bride-to-be and her secret lover slip away to have a serious talk about what she's about to do. Will Phil wind up stopping the ceremony?

In casting news, Jo Joyner is taking a break from playing Tanya Cross. The actress has been playing the role for seven years but has scheduled eight months leave to pursue other opportunities.

Emmerdale:
Spoiler alert: Pearl's job is saved but Ali's could be in trouble if she keeps showing up late. Brenda searches for alternative therapies to treat her condition, but this doesn't impress those around her. Nikhil tells her they should push ahead their marriage plans. This causes even more friction with her family and leads to a Willy Wonka themed stag night.

Thomas is pressured into leaving town, but Belle doesn't seem to think he should be going without her. And Declan shoves Steve out of their deal, much to Katie's chagrin.

Hollyoaks:
Spoiler alert: Robbie and Callum continue to push each other. Texas is shocked by Leann's wedding news, but he has other things on his mind, like Maxine as her emotions run away with her. Meanwhile, Leann's life gets harder when she is forced to make a difficult choice that could cost her a friend.

Mercedes could be in serious trouble and it looks like Dr. Browning can't do much about it. While he runs off to deal with his suspicions, Jim attempts to make Mercedes' return run smoothly, but it might be too late.

Home and Away:
Spoiler alert: While Liam prepares to leave the Bay behind, Brax tries to get closer to Ricky, who isn't totally warming up to the idea. Family tensions increase as Cheryl welcomes Tamara into her clan, much to Bianca's annoyance. Kyle finally decides to give up on Tamara. On a more serious note, news of Dex's brain injury begins to spread, leading him to break from April and lock lips with Steph.

Neighbours:
Spoiler alert: Chris and Scotty wind up in an awkward position. Scotty does his best to pretend that nothing has actually happened between them but Chris isn't convinced and suspects that he's been lying to more people than just himself.

Two business offers sit on the table for Priya, as well as one that is rather inappropriate and leaves her looking for some help.

Discover what's happening in John Hamm's pants. And then find out what John Ross and Sue Ellen bond over in our Dallas Recap: Let me In.