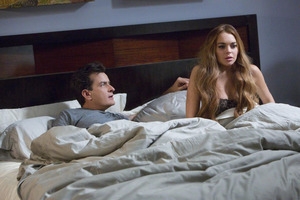 There is a lot going on in Primetime television during the week of March 4, as well as a few scoops for the weeks to come. This week’s Primetime Dish column highlights episode teasers, casting scoops, a new Lohan appearance, a SyFy return, a CBS show vet jumps over to a USA Network series, the Goo Goo Dolls head to a popular zip code, and a steadicam operator was hospitalized during the filming of a key CBS episode…

90210:
Disaster results from mixing business with pleasure in the CW’s March 4 9:00 PM episode titled “Life’s A Beach.” Monday Episode Teasers: Liam complicates his new business when he becomes romantically involved with his first investor. Naomi tries to convince Mark to stay in Los Angeles after he receives a job offer in New York, and Dixon convinces Silver to direct Michaela’s music video. In casting news… The rock band The Goo Goo Dolls will perform on Monday May 6. Fans of the band will remember when they appeared on “Beverly Hills 90210” back in the 1990s.

Anger Management:
Lindsay Lohan will appear as herself in an upcoming episode of the FX series, starring Charlie Sheen. Set to air in April, look for Lohan and Sheen’s character to get romantic. The actors last worked together in “Scary Movie 5.” The series airs Thursdays at 9:30 PM.

Arrow:
On Wednesday March 6 at 8:00 PM the CW will air a repeat of its January 23 episode titled “Trust But Verify.”

Banshee:
In Cinemax’s Friday March 8 10:00 PM episode titled “Always The Cowboy” Carrie leaves the hospital in order to get her family out of town. Lucas receives a message about fooling around with Kai’s niece. Rebecca is introduced into the business world, and Alex recruits a thug with gambling issues.

Beauty And The Beast:
On Tuesday March 5 at 9:00 PM the CW will air a repeat of its February 14 episode titled “Trust No One.”

Covert Affairs:
Hill Harper, who is leaving his “CSI: NY” role after nine years, will be turning up on the USA Network series as a CIA station chief. Harper will premiere in season four as a series regular this summer.

CSI: Los Angeles:
On Thursday February 21 a steadicam operator was injured on the CBS set during the evening hours. Deadline learned that the accident happened during the filming of a key episode – one that was to serve as a backdoor pilot for a spinoff series. The operator suffered serious injuries after being pinned against something and was hospitalized. In turn, all production was shut down.

Cult:
Role-playing is a dangerous game in the CW’s March 5 9:00 PM episode titled “Being Billy.” Tuesday Episode Teasers: A surprise visitor tells Jeff about a dangerous game Nate has been hosting called “Being Billy.” E.J. finds that Nate sent a cryptic email to a hidden recipient list online, and Kelly confronts Billy on the show. This episode will repeat on Friday March 8 at 9:00 PM, which will kick off the series’ permanent move to Friday nights.

Dallas:
Mobile App Viewing! A feud between two people led to a car race on the Monday March 4 episode titled “The Furious And The Fast.” Soaps.com posts recaps from each episode after they air. Until then find out what’s set to happen the rest of this season in our Dallas Spoilers. In other news… If you have the TNT Mobile App fans can watch the first six episodes of season two leading up to JR’s funeral, which will air on Monday March 11. Then on Tuesday March 5 the seventh episode will be available and all will stream until Tuesday March 12.

Game Of Thrones:
Watch the new teaser video for the HBO series, which returns with season three on Sunday March 31.

Girls:
In HBO’s Sunday March 10 9:00 PM episode titled “On All Fours” Hannah’s mental state is further jeopardized by her aggressive publisher and looming deadline. Adam and his new girlfriend experience their first quarrel. Shoshanna avoids Ray at Charlie’s work party, and Marnie sets out on following her dreams.

Glee:
As a reminder, Soaps.com covers the goings on at McKinley High. Tune in each Thursday and read our Glee Weekly Recaps, which are posted after the show airs. The show will be back on Thursday March 7. Watch the “Glee” Spoiler Video: Girls (And Boys) On Film and keep up with other happenings in our Glee News Room.

Happy Endings:
Stephanie March (“Law & Order: SVU”) has been cast to play Brooke – Alex and Jane’s sister – in the coming months. As a reminder starting on March 29 the ABC series will be seen on Fridays.

Hart Of Dixie:
It's all about taking sides in the CW's March 5 8:00 PM episode titled "We're Never Getting Back Together Again." Tuesday Episode Teasers: Zoe becomes overly protective with Rose and her boyfriend while trying to keep her feelings for Wade under control. Wade appears suspicious when money goes missing at the church’s casino fundraiser, and Brick and Shelby’s relationship decision pushes Lemon and George on a quest to sabotage things.

Nikita:
On Friday March 8 at 8:00 PM in the CW episode titled "Reunion" Amanda plans to kidnap Ari’s son as leverage, to which Ari begs Nikita for help. Nikita and Amanda are captured, and Michael assigns Alex to be Nikita’s back-up, which infuriates Owen.

Revenge:
The ABC series is on hiatus until Sunday March 10. For now view our Revenge Spoilers for the upcoming episode titled "Retribution."

Sisterhood Of The Traveling Pants 1 And 2:
On Saturday March 16 ABC Family will air back to back features of the films beginning at 7:00 PM. Watch the official promo videos for both below.

Supernatural:
On Wednesday March 6 at 9:00 PM the CW will air a repeat of its November 14, 2012 episode titled "A Little Slice Of Kevin."

The Carrie Diaries:
There's a lot of sneaking around in the CW's March 4 8:00 PM episode titled "Hush Hush." Monday Episode Teasers: Carrie spends a night out in Manhattan with Larissa and some co-workers, which is turned upside down. Maggie and Mouse warn Sebastian better make a grand gesture if he plans to win Carrie back. Harlan convinces Tom to go on a double date, and Maggie needs to tell Walt about Simon before Donna does.

Warehouse 13:
The second half of the SyFy series' fourth season will resume on Monday April 29 at 10:00 PM.

Read who considers abortion and adoption on Hollyoaks after taking a fall at work.