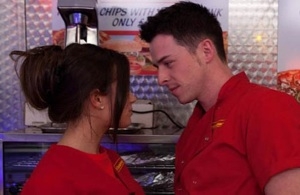 Secret's out on Emmerdale. (ITV)

A couple of stars are leaving their soaps, new loves are blossoming on others, while secrets are out on a couple more. Keep track of all the action on British and Aussie soaps.

Coronation Street:
Natalie Gumede, who plays Kirsty Soames, is filming her final scenes on the soap this week. Kirsty has been abusing her partner Tyrone for the past few months, but accused him of physically assaulting her. Tyrone is about to go on trial and the show filmed two verdicts: One of him being led off in handcuffs and one of Kirsty being arrested. Does Gumede’s exit mean the latter outcome will air, or will she get the ultimate revenge for Tyrone’s affair?

Spoiler alert: Despite being involved with Chesney, the father of her child, young mom Katy becomes interested in resident hottie Ryan when they start working together. Flirtation quickly turns into a kiss, which leads to them sneaking off together.

EastEnders:
“Corrie” isn’t the only show saying goodbye to one of their actors. “EastEnders” will see Scott Maslen exit his role as Jack Branning later this year. Maslen has played the Branning brother since 2007 and is currently involved in a bit of a love triangle with his fiancée Sharon and her ex Phil.

Spoiler alert: Janine is returning to Walford after having left Michael and their child six months ago. After she left, Michael had a hard time adjusting to single fatherhood, but has now taken to it in a way only Michael can. He also recently slept with Kat Moon, who he has another child with. Sounds like things could get pretty interesting for Michael in the next few months.

Emmerdale:
Spoiler alert: Brenda learns she has a brain tumor and needs surgery. She refuses to go under the knife, instead opting for the positive thinking treatment. Her adopted daughter Gennie can’t understand her behavior. She grows more upset when Brenda keeps her diagnosis from her boyfriend, who she breaks up with instead of confiding in.

Edna's been having financial problems, but the senior citizen is too proud to let anyone know what's going on. Instead, she's scrimping on food and heat, but her secret's about to come out. Jimmy finds her passed out and calls an ambulance. Afterwards, he offers her a place to stay. Will she let down her barriers and accept?

Hollyoaks:
Spoiler alert: Kevin's already set up Brendan on Walker's orders, now he's instructed to off Maxine, who could put a kink in all his plans. A reluctant Kevin drugs her coffee in order to complete his task. It remains to be seen if he'll go through with murder, but a body is later dragged out of the river.

Pregnant teen Sinead suffers a fall at work, but neither she nor the baby is harmed. It's not exactly good news for Sinead though, as she isn't ready to be a mom. In the aftermath, she considers both abortion and adoption. What will she decide?

Home and Away:
Spoiler alert: Casey's been having a rough time of it while serving his weekend detention sentence. Things will reportedly get worse before they get better when Casey gets stabbed by his tormentor Courtney. That's apparently what you get for trying to protect the new guy from the resident bully.

On UK screens, Rosie hits the canvas and befriends Sasha. However, the friendship turns toxic, as Rosie becomes a bit obsessive. In a bid for Sasha's attention, Rosie heads into the water, despite not being able to swim. When Sasha attempts to save her, she finds herself in danger as well.

Neighbours:
Spoiler alert: Ajay and Priya's marriage is a bit unstable at the moment thanks to her affair with Paul. However, things could turn around when she starts receiving stalkerish text messages from a mystery person. She remains silent about them at first, but eventually confesses her fears to her husband. Will a possible threat on Priya's life bring Ajay around?

Lucas loves Vanessa, but hasn't told her how he feels. They do have a child after all, but it was a product of a one-night stand. Sonya thinks he should confess everything or else he'll never have a chance with her. He doesn't think she'll reciprocate his feelings, so Sonya decides to tell Vanessa the truth herself.

Keep up with what's to come on U.S. nighttime dramas in Primetime Spoiler Alert and find out who else has joined the online soaps in Prospect Park to Migrate AMC and OLTL Online.

Weekly Soap Debate: Who's The Daddy...