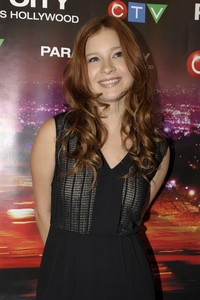 There is a lot going on in Primetime television during the week of February 25, as well as a few scoops for the weeks to come. This week’s Primetime Dish column highlights episode teasers, casting scoops, a HBO series returns in April, an ABC series moves to a new night, and an “O.C.” alum heads to Nashville…

90210:
Charlie Weber (“Underemployed”) guest stars as Mark in the CW’s Monday February 25 9:00 PM episode titled “Strange Brew.” Monday Episode Teasers: Naomi and her half-brother Mark decide to open a restaurant. Without Silver’s knowledge, Dixon books Michaela to perform at the opening. Annie’s newly re-surfaced feelings for Liam confuse her, and Navid finds out Campbell is cheating on his fiancée.

Arrow:
In the CW’s Wednesday February 27 8:00 PM episode titled “Dead To Rights” Oliver and Diggle find out Deadshot is alive and targeting Malcom. Tommy refuses to attend a benefit for Malcom, and Oliver struggles with balancing his relationship with McKenna and his duties as Arrow.

Banshee:
In Cinemax’s Friday March 1 10:00 PM episode titled “We Shall Live Forever” Rebecca, who’s cast out of her Amish home, turns to her uncle for a new start. Though Gordon is hell-bent on uncovering Carrie’s past, she urges Lucas to let go of his, and Alex’s sister suddenly appears.

Beauty And The Beast:
On Thursday February 28 at 9:00 PM the CW will air a repeat of its January 24 episode titled “Seeing Red.”

Cougar Town:
In TBS’ Tuesday February 26 10:00 PM episode titled “You And I Will Met Again” Jules and Grayson’s naked day is anything but sexy. Breaking the news to Travis that Laurie and Wade are moving in together doesn’t go as planned, and Tom loses his ‘new guy’ status and becomes Jules’ personal cheerleader.

Cult:
Stacey Farber (“18 To Life”) guests stars as EJ in the CW’s February 26 9:00 PM episode titled “In The Blood.” Tuesday Episode Teasers: Jeff asks tech-savvy EJ to help find his brother Nate. Skye admits to Jeff why she took a researcher job. Peter Grey brushes off concern that “Cult” fans believe there are hidden messages embedded in the show, and Kelly and Paz find a body and believe it might be a message from Billy.

Dallas:
Christopher makes a startling revelation in the Monday February 25 episode titled “Blame Game.” Soaps.com posts recaps from each episode. Until then find out what’s set to happen this season in our Dallas Spoilers.

Enlightened:
In HBO’s Sunday March 3 9:30 PM episode titled “Agent Of Change” Amy gives Tyler a warning about the inevitable fallout as a result of bringing down Abaddonn. Helen’s reaction is not what Amy expected, and Krista gives birth and finds herself at the end of Amy’s accusations.

Girls:
In HBO’s Sunday March 3 9:00 PM episode titled “It’s Back” Hannah tries to hide how anxious she is about her book from her parents. Marnie is shocked to hear about Charlie’s new company. Adam meets a woman at his AA meeting and agrees to date her daughter, and Shoshanna stops to think after Ray refuses to attend college parties.

Happy Endings:
ABC has announced that it will be moving its series from Tuesdays to Fridays beginning on March 29 at 8:00 PM. Back to back episodes will air during its return premiere.

Hart Of Dixie:
Many are avoiding reality in the CW's February 26 8:00 PM episode titled "Where I Lead Me." Tuesday Episode Teasers: Zoe agrees to be the maid of honor at Wanda and Tom's wedding. Lemon decides to take matters into her own hands after facing her memory of being left at the altar, and Lavon enlists George's help in fighting a neighboring town that's trying to build a shopping mall next to their local beach.

Last Man Standing:
Jonathan Taylor Thomas ("Home Improvement") will appear in a guest starring role as the manager of a high-end restaurant this spring.

Nashville:
Chris Carmack ("The O.C.") has landed a recurring role as Will, Scarlett's new neighbor. The ABC series airs Wednesdays at 10:00 PM.

Nikita:
The Division is asked for help in the March 1 8:00 PM episode titled "With Fire." Friday Episode Teasers: Nikita and Owen pick up Ari before the FBI does. Ari reveals that Amanda is working with a terrorist who plans to attack on American soil and asks for fifty million dollars for more details. Ryan debates paying the bribe, and Sean is jealous of Alex and Owen.

Revenge:
The ABC series is on hiatus until Sunday March 10. For now view our Revenge Spoilers for the upcoming episode titled "Retribution."

Southland:
In TNT's Wednesday February 27 10:00 PM episode titled "Babel" a breakdown with the LAPD's dispatch system causes issues amongst the cops. Lydia reaches out to Terrell. John gets a new partner, and Ben makes a romantic connection on the job, which causes a strain with Sammy.

Supernatural
It's all about Gods verses Zombies in the CW's February 27 9:00 PM episode titled "Remember The Titians." Wednesday Episode Teasers: Sam and Dean investigate a possible zombie case and are stumped when an amnesiac man dies then revives himself once a day. After the guy is attacked Sam and Dean realize he’s not a zombie but instead a god, Prometheus.

The Carrie Diaries:
It's all about keeping secrets in the CW's February 25 8:00 PM episode titled "Caught." Monday Episode Teasers: Larissa offers Carrie an internship, to which she's torn about accepting. George gets the wrong idea about Carrie's intentions. Tom agrees to go to the "Nutcracker" with Dorrit. Mouse blames an exam grade on her and Seth's relationship, and Donna blackmails Maggie after she catches her cheating on Walt. Watch a promo below.

The Vampire Diaries:
On February 28 at 8:00 PM the CW will air a repeat of its January 17 episode titled "After School Special." Read Soaps.com's Vampire Diaries Weekly Recaps after each episode airs.

Visit our Soap Scoop: UK/Australia Edition to find out how fans can have their recordings featured as the new theme song for "Neighbours."