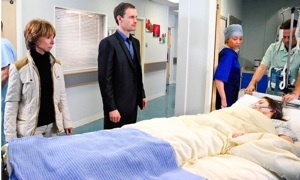 Rivals on Home and Away. (Channel 5)

A fire on “Corrie,” a twist on “EastEnders,” a new romance on “Emmerdale,” a vicious plan on “Hollyoaks,” a breakup on “Home and Away” and a contest on “Neighbours.” There’s tons of juicy drama to be had. Don’t miss out on what’s to come across the pond.

Coronation Street:
Spoiler alert: The local hangout, The Rovers, goes up in flames next month. The fire will put more than one life in danger, including landlady Stella. Who will perish and who will survive?

Gail put the pieces together and figured out her daughter-in-law Kylie helped Lewis bilk her out of her life savings. A pregnant Kylie confesses she did it because Lewis knew she cheated on David. Kylie proceeds to get drunk, fall and end up in the hospital. When Gail tells her other son Nick that David should know the baby might not be his, Nick admits he was the one Kylie slept with.

EastEnders:
Spoiler alert: Jack’s had it with Phil getting in between him and Sharon and takes a swing at him. Unfortunately, the blow causes Phil to fall, hit his head and end up in the hospital. Jack ends up in the slammer, but can Sharon convince a recuperating Phil to go easy on her fiancée?

After Alfie asks Kat for a divorce, she runs straight into Michael’s arms. This would seem to ensure the end of the Moons, but all is not what it seems. There’s apparently one more twist to come that will keep Kat and Alfie linked.

Emmerdale:
Spoiler alert: Rachel was left horrified when, under the assumption Sam was interested, she confessed her feelings to him only to be let down. Things are looking up though as Sam stops by and they end up in a kiss. Considering her last relationship was with a married man who hasn’t publicly owned up to their child, this one is certainly starting out better.

After his wife Katie left, Declan succumbed to his flirtation with Charity. Though their tryst was a one-time thing, it will have lasting repercussions. Reportedly, dangerous ones. It sounds like Katie returning to work on her marriage is just the start of the complications.

Hollyoaks:
Spoiler alert: Upping his vengeance against Brendan, Kevin pretends to bond with his new boss by making up a story about his uncle abusing him. Brendan empathizes with him, considering he had a similar childhood. However, Brendan catches on to the lie, but his rage doesn't go far enough for Kevin and his scheme's mastermind Walker. To complete his plan, Walker beats up Kevin, who heads to the police station where he accuses Brendan of sexually assaulting him.

The end is near for Texas, as the character prepares for her wedding day. Sadly, she won't be going on a honeymoon, as Texas is pushed out a window, resulting in her death. Her intended Will is just one character to land on the suspect list.

Home and Away:
Spoiler alert: Brax and Natalie have had a rough go of it over the past few months, so it's understandable when she's tempted to move on when her ex Zac shows up. Brax blowing up at Zac, who is supposed to be looking after Casey at the detention center, helps Natalie make her choice. It's the old love over the bad boy for her.

Looks like Brax had good reason to go after Zac, as his brother Casey returns from his latest weekend detention bruised and battered. It seems he's being beaten by a fellow inmate because he won't act as his drug courier. As prison education officer, can Zac protect him, or will Casey endure more physical harm?

Neighbours:
The Aussie soap will be getting a new theme song, which will be chosen in the "Neighbours" Remixed contest. Participants in both the UK and Australia can enter their recordings of the revamped theme song at Neighbours Remixed. The UK and Australian finalists will enter into a sing-off, with the winner's song being played over the opening credits beginning April 15.

Spoiler alert: Things haven't been going too well between marrieds Karl and Susan, considering his long ago fling Sarah has returned to town. However, things could turn around despite Susan handing her husband divorce papers. Karl decides to give her what she wants and heads out to file them. But, he can't do it and returns to Susan. Will she take him back or file the papers herself?

Find out the latest actors and behind the scenes personnel to join AMC and OLTL Online and go to Primetime Dish to watch "Arrow's" extended mid-season trailer.