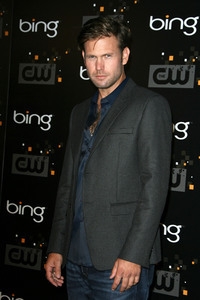 There is a lot going on in Primetime television during the week of February 18, as well as a few scoops for the weeks to come. This week’s Primetime Dish column highlights episode teasers, casting scoops, a new CW show starring a former “Vampire Diaries” professor, and an interview with the executive producers of a popular FOX series…

90210:
Chef Wolfgang Puck (“Top Chef”) guest stars in the CW’s February 18 9:00 PM episode titled “Brother From Another Mother.” Monday Episode Teasers: Liam experiences some symptoms of post-traumatic stress disorder just thinking about testifying against Ashley. Annie isn’t happy with Naomi, who locates their half-brother Mark, a chef who owns a gourmet food truck. Wolfgang Puck is a celebrity judge in a cooking competition, and Dixon discovers that Michaela has an amazing voice.

Arrow:
Renewed! Colton Haynes (“Teen Wolf”) guest stars in the CW’s February 20 8:00 PM episode titled “Dodger.” Wednesday Episode Teasers: Oliver asks Detective McKenna on a date after Felicity tells him he’s all work and no play. Dodger, a jewel thief, arrives in Starling City and targets someone very close to Oliver. Thea’s purse is stolen by a fast pickpocket named Roy Harper (Haynes), and Moira takes a stand against Malcom. In other news, the network has picked up the series for a second season. Watch this mid-season extended trailer for what else is ahead this month.

Banshee:
In Cinemax’s Friday February 22 10:00 PM titled “Behold A Pale Rider” Lucas’ cover is threatened when Carrie gives Lucas over to Rabbit in order to protect herself and her family. Deva and Mayor Kendall’s wife are among those whose lives are imperiled during a hostage crisis at the high school, which stems from a drugstore robbery.

Beauty And The Beast:
Tragedy strikes in the CW’s February 21 9:00 PM episode titled “Tough Love.” Thursday Episode Teasers: Vincent is introduced to Heather, who asks Tess to help stage an intervention with Cat. An interesting proposition could change the course of Evan’s cross species investigation, and after Heather goes missing, Vincent holds the cards to saving her life.

Cougar Town:
In the TBS Tuesday February 19 10:00 PM episode titled “Flirting With Time” the crew is quick to judge their potential new neighbors who are looking at Grayson’s house. Memories of redneck Bobby and Jules’ move to the neighborhood resurface, and Laurie’s excitement by Wade’s return from Afghanistan quickly turns to fear.

Cult:
Matt Davis, “The Vampire Diaries'” (ex-Alaric Saltzman) stars as Jeff Sefton in the new CW series, which premieres with the episode titled “You’re Next” on Tuesday February 19 at 9:00 PM. When Investigative Journalist Jeff Sefton’s brother mysteriously disappears, he enlists a young research assistant working on “Cult” to help him. The episode repeats on Friday February 22 at 9:00 PM. Watch a preview of what else is in store for viewers below.

Dallas:
An enemy from the past resurfaces in the Monday February 18 episode titled “Trial and Error.” Soaps.com posts recaps from each episode. Until then find out what’s set to happen this season in our Dallas Spoilers.

Downtown Abby:
Will technology ultimately hurt or help the show? That’s the big question surrounding the PBS show, which airs in the U.K. months before the U.S. Spoilers that leaked for a Christmas special, surrounding the fate of a central character, had Americans up in arms.

“…[Senior Vice President of Variety Insight, Carolyn Finger] also warned that if there continue to be major spoilers each season, PBS could risk alienating viewers and pushing them to other platforms. For instance, she noted that fans can download the entire current season of ‘Downton’ on Apple Inc.’s iTunes even though the season finale will not air on PBS until Feb. 17. “If you buy the series on iTunes, you get a jump on the final episodes,” she said. “And if I’m PBS, to me that’s a very threatening posture.”

“[Robert Thompson, professor of television and popular culture at Syracuse University says,] “But look at the numbers that the Olympics got; they were very, very good. And I think when all is said and done … in the culture as it stands right now, [delayed, appointment-based viewing] is still able on occasion, as with the Olympics and ‘Downton Abbey,’ to produce really big hits.”

Enlightened:
During HBO’s Sunday February 24 9:30 PM episode titled “No Doubt” Tyler gets Eileen to arrange a meeting. Szidon has more compassion than Amy expected. Dougie has a hard time after getting official word about Cogentiva’s future, and after Amy confides in Krista about the Abaddonn expose, she has a tense meeting with Levi.

Game Of Thrones:
The HBO series returns with season three on Sunday March 31.

Glee:
As a reminder, Soaps.com covers the goings on at McKinley High. Tune in each Thursday and read our Glee Weekly Recaps, which are posted after the show airs. Get a look into the Thursday February 14 episode through our Glee Weekly Spoiler Video: I Do.

Hart Of Dixie:
Someone changes their tune in the CW’s February 19 8:00 PM episode titled “The Gambler.” Tuesday Episode Teasers: Wade plans to use the prize money, if he wins the Battle Of The Bands competition, to open up his own bar. Zoe has a suggestion regarding George that ultimately backfires. Lemon talks Magnolia into some sisterly bonding, and Lavon realizes something about his future while helping Tom with his relationship.

Nikita:
It’s all about murder in the CW’s February 22 8:00 PM episode titled “Black Badge.” Friday Episode Teasers: Naomi, a CIA agent, reveals Madeline Pierce’s involvement with Division and hands it over to the Director of the CIA. Amanda frames Sean for Kendrick’s assassination, and Nikita comes up with a plan to free him, which could end up costing Sean his life.

Revenge:
Watch the Revenge Spoiler Video: Sacrifice for a look into the Sunday February 17 9:00 PM episode, when a major explosion erupts.

Supernatural:
Renewed! The CW has picked up its hit series for another season. For now… Witches are not very well liked in the February 20 9:00 PM episode titled "Man's Best Friend With Benefits." Wednesday Episode Teasers: Kevin, a cop who turned to witchcraft after working a case with Sam and Dean, experiences nightmares in which he murders innocent people. When the murders in question happen for real, Dean and Sam are called to help, but they aren't sure saving a witch is what they want to do. In casting news… Brooke Langton ("Melrose Place") will appear as a single mom named Hayley, and John Reardon ("Arctic Air") will play a drifter named Shane in the Wednesday February 27 episode.

The Carrie Diaries:
It's all about keeping traditions alive in the CW's February 18 8:00 PM episode titled "End Game." Monday Episode Teasers: Carrie enlists Mouse's help when trying to cook the perfect Thanksgiving dinner for her family, her new boyfriend George and his dad Harlan. Maggie shares Thanksgiving with Walt’s family but soon realizes that she hasn’t put much thought into her future, and Sebastian is alone for the holiday since his mother flew out of town with her boyfriend.

The Vampire Diaries:
Renewed! A terrible truth is revealed in the CW's Thursday February 21 8:00 PM episode titled "Stand By Me." Visit our Vampire Diaries Spoilers to hear how Rebekah reacts to Damon's grim news and read Soaps.com's Vampire Diaries Weekly Recaps after each episode airs. The series has also been picked up for another season by the network.

Touch:
Interview! Soaps.com sat in on a conference call with the FOX series' Executive Producers Tim Kring and Carol Barbee. When asked what was the best part about bringing the characters to life for the viewers Kring replied, "You know what’s really interesting - I mean I could go off in to a very big tangent here but I’ll go on a little one - is just the nature of making a show is very interesting in that the actors and the characters sort of meet you half-way. It’s a very organic process and things that you set out to do often times change because you start to see the possibilities that actors bring to things. That process is I think the most exciting part about making a series is that you can’t really dictate your will on it very much because it ends up being what it wants to be."

Barbee went on to share, "And I would say, to add to that, it’s been an amazing experience making this show. One of the things I love the most about writing this show is the variety of things you get to write about and the variety of stories you get to write about. Last season we had one main story with Martin and Jake, but there would be four or five sort of short stories taking place around the world, and we would just drop in to these people’s lives and pick up a little four, five, six beat story that then would connect them to other people around the world. As a writer that is just such a gift to be able to do that."

Up All Night:
During a revamp of the NBC series Christina Applegate has decided to exit her lead role as Reagan Brinkley, allegedly due to creative differences. Rumor has it Lisa Kudrow ("Friends") could take over Applegate's role.

Weekly Soap Debate: Back From The...