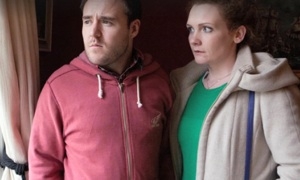 Dual endings on “Corrie,” new romances on “EastEnders,” an illicit affair on “Emmerdale,” family secrets on “Hollyoaks,” a return on “Home and Away” and a wedding gone wrong on “Neighbours.” Keep up with all the latest twists and turns on British and Aussie soaps.

Coronation Street:
Spoiler alert: Stella’s mother Gloria returns to Weatherfield and she’s not alone. She shows up with Eric her fiancé. However, she’s just interested in his money, which he quickly realizes. So, Eric turns his attentions to Gloria’s granddaughter Eva, as he asks her to go jet setting with him. Will she take him up on his offer to travel the world?

Tyrone has been accused of abuse and now child abduction, so he’s headed to court. He only took baby Ruby though so he could protect her from the real abusive person in the relationship Kirsty. The show has filmed two outcomes to his trial. One has Tyrone proving Kirsty’s been abusing him and she is handcuffed, while the other ending has him being found guilty. You’ll have to watch to find out which one is aired.

EastEnders:
Spoiler alert: Brokenhearted over the reveal of Kat’s affair with Derek, Alfie dumped his wife. He quickly moved on to Roxy, but Kat still thinks there’s hope for a reunion. Alfie squashes that dream when he asks for a divorce. The next time Kat sees Roxy, who has taken over her man, her job and her son, a physical fight breaks out. Things start looking up for Kat when Michael is there for her in the aftermath. They end up in a kiss and maybe more.

Business rivals Ian and Denise have become close recently as Ian was there for Denise when her sister Kim kicked her out of the house. Things will soon take a new turn when the friends start dating. They decide to keep their relationship secret for now, but how serious will the two become?

Emmerdale:
Spoiler alert: Although Charity doesn’t know it yet, her husband Jai had an affair that produced a child. All she knows is Jai has been acting off lately and even left town for a while. In his absence, Charity sets her sights on Declan, Jai’s best friend, as part of a business deal. Things get more serious though when they sleep together.

Moira is fed up with Cain's violent ways of dealing with things. However, he surprises her by declaring his love. She needs time to process it all, so Cain decides to bail and live in Scotland for a bit. Moira runs after him, but will he change his mind?

Hollyoaks:
Spoiler alert: Dodger, Will, Sienna and Liberty's mother Anna comes to town with a few shocking reveals. It seems she left Patrick with son Dodger because he was abusive. The accusations are denied, so it remains to be seen who is telling the truth. Regardless, Anna is going to have a lot to answer for, especially the part about leaving Dodger's twin sister Sienna behind.

Mitzeee is on her way off the canvas, but first she has to decide whether or not to help Carl with his plan to kill Walker. What will she do?

Home and Away:
Spoiler alert: Heath just went through the trauma of his daughter getting kidnapped. Now that she's back, her grandmother Connie bars Heath from seeing her. His way to deal with his latest setback is to push everyone away, including girlfriend Bianca. If Heath isn't careful, Bianca might actually go away this time.

After five years away, Sally Fletcher is returning to Summer Bay. Actress Kate Ritchie, who played the character for twenty years starting when she was just eight years old, will return in time for the show's 25th anniversary later this year.

Neighbours:
Spoiler alert: After leaving in the 90s, Brad Willis is returning to Ramsay Street and bringing his wife and two teenage kids with him. Brad and his wife Terese will be played by former "Home and Away" stars Kip Gamblin and Rebekah Elmaloglou.

Toadie and Sonya are planning a wedding, but the actual day won't go exactly as planned. It seems the couple faces location issues, illness, absentee guests and something a little more serious. Will they get their happily ever after?

Find out which big names recently signed on when Prospect Park Migrates AMC and OLTL Online and read about Lady Gaga's latest feud with her best friend in Celebrity News.

Weekly Soap Debate: Back From The...