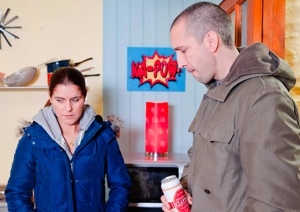 Not a warm welcome on Hollyoaks. (Lime Pictures)

Exes return to wreak havoc on “Hollyoaks” and “Neighbours,” parents kidnap their children on “EastEnders” and “Coronation Street” and new relationships are on the horizon on “Emmerdale” and “Home and Away.” There’s lots of drama ahead. Don’t get left behind.

Coronation Street:
Spoiler alert: In a desperate attempt to be with his daughter, Tyrone plans to take Ruby and flee Weatherfield. He enlists the help of his girlfriend Fiz, who reluctantly agrees to go on the run with him. His pal Kevin, who has been trying to keep Ty in check, gives them an assist by making Ruby accessible to them. They apparently don’t get very far though, as Ty ends up in jail.

Maria and Marcus enjoy a night out with Beth and Kirk at a gay bar. The venue is cause for concern for Maria though, as she grows insecure thinking her formerly gay boyfriend is checking out the male patrons. The two get in a fight, which ends in Maria leaving the establishment. Will Marcus follow or stay behind to look at the eye candy?

EastEnders:
Spoiler alert: Tyrone isn’t the only British soap character planning to kidnap their child. “EastEnders'” Lola breaks down over not being able to spend time with her baby and snatches her from legal guardian Phil. The situation causes Phil to turn to his ex Sharon for support and they end up in a kiss, which probably won’t sit well with Sharon’s fiancé Jack.

Bianca just got out of prison and is starting to build a new life for herself. Unfortunately, she faces turmoil when her young son Liam gets involved with a gang. She urges him to reconsider his actions and forces him to choose between his life of crime and his family. It’s anyone’s guess what he will decide.

Emmerdale:
Spoiler alert: Valentine’s Day is not a happy one for Rachel. She’s already forced to hide the truth about who the father of her child is and coming up, she mistakes Sam for an admirer. Encouraged by a Valentine’s Day card she receives, she assumes it’s from Sam and lays her feelings for him on the table. Unfortunately, there’s been a mix up and Sam lets her down gently that they can only be friends. But is that how he truly feels?

David and Alicia married so he could raise her son while she went to prison. When she got out, they separated despite her having real feelings for him. He, however, had fallen for Priya and now they're engaged, even if the proposal was born from a series of miscommunications. David might actually have feelings for Alicia though, which will get even more complicated when David and Priya plan to get married at Home Farm, where Alicia is the events manager.

Hollyoaks:
Gillian Taylforth, who played Kathy Beale on "EastEnders' for over a decade, is headed to "Hollyoaks." She will play the matriarch of a family, consisting of five boys, that moves to the village.

Spoiler alert: Amy returns as her ex Ste and Brendan enjoy their reunion. She is unhappy to see the dysfunctional couple back together and worries for the safety of their kids. Fearing Ste is reverting back to his abusive ways, she takes the kids and leaves town. Ste is left devastated, but Brendan's enemy Walker is happy to watch the events he set in motion unfold.

Home and Away:
Spoiler alert: Adam kidnaps little Darcy in order to force her father Heath to deal drugs for him. It's Brax to the rescue though, as he takes Heath's place in the dirty dealings. When things go south, Brax shows up to save his brother. They flee the scene, but Adam's out for blood when he learns the deal didn’t go through.

Tamara returns to Summer Bay when family issues keep her away from home. Casey takes her in as a friend, but she reveals she thinks of him as more than that. He's apparently receptive as the two sleep together, but how will his ex Sasha take the news?

Neighbours:
Spoiler alert: Lauren Turner brings her family back to Ramsay Street, but they get off to a rocky start. The trouble lands on Lauren's dad Lou, who interrupts someone breaking into his daughter's place. Could the intruder be linked to the secrets the Turners bring with them?

When Sarah, who years ago broke up Susan's relationship to Karl, returns to town, Susan is understandably upset. Things escalate and Susan files for divorce from Karl. A kiss between Sarah and Karl ensues, leading Karl to confess a 14-year-old secret to Susan. Will it hurt or help his case?

Find out who wants to marry Brady on "Days of our Lives" in Soaps Spoiler Digest and read about who John Ross must choose between in the Dallas Spoilers.