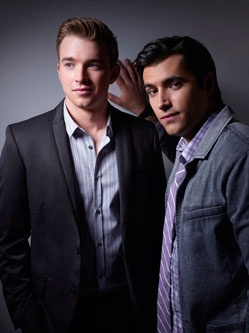 NBC’s “Days of our Lives” took home this year’s award! Soaps.com sends everyone at the show our congratulations!

The Daytime nominees for this year’s 24th Annual GLAAD (Gay and Lesbian Alliance Against Defamation) Media Awards have been announced. These awards recognize those in the media for accurate, fair and inclusive representation of the lesbian, gay, bisexual and transgender community.

And the Daytime nominees for Outstanding Daily Drama are “The Bold And The Beautiful” for its storyline involving Karen (Joanna Johnson) and Dani (Crystal Chappell) and “Days of our Lives” for its storyline surrounding Will (Chandler Massey) and Sonny (Freddie Smith).

The awards will be held on March 16 at the New York Marriott Marquis in New York City, New York, on April 20 at the JW Marriott in Los Angeles and on May 11 in San Francisco, California at the Hilton San Francisco – Union Square.

Soaps.com will update readers when the winner is announced.

If you missed last night’s “PLL” episode read Soaps.com’s Pretty Little Liars Recap and see who was nominated for a Directors Guild Of America Award.