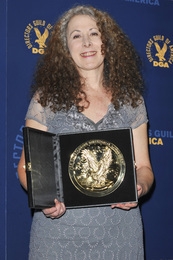 Recognizing those in Daytime.

This year’s DGA winner was announced at a ceremony last Saturday evening and went to former “One Life To Live” Director Jill Mitwell.

This year’s 65th Annual Directors Guild Of America Awards (DGA) nominees have just been announced. The awards honor those for Outstanding Directorial Achievement in television and commercials.

And the nominees are…

“Days of our Lives'” Albert Alarr

“One Life To Live’s” Jill Mitwell

The winners will be presented at the awards ceremony, hosted by Kelsey Grammer (“Boss”), at the Ray Dolby Ballroom in Los Angeles, California on Saturday February 2. Soaps.com will update readers with the winners.

If you missed last night’s winter premiere read our Pretty Little Liars Recap and catch up on the new season of “Revenge” through last Sunday’s Revenge Recap.