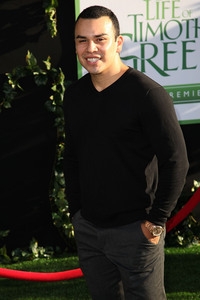 Soaps.com’s December interviews had one Port Charles actress talking about her character’s adjustment to Jason Morgan (Steve Burton) being gone, and a Primetime actor sharing how he landed his “Army Wives” role.

Hollie Deese chatted with Liz Webber portrayer in our “General Hospital” Interview with Rebecca Herbst. When asked how Liz feels now that Jason’s gone, Herbst stated, “We haven’t see her really mourn Jason a whole lot either. I have been asked this question a lot and I am not shy about saying that Elizabeth didn’t have any closure. I keep thinking maybe it will happen, but I am not sure. I know that – just from knowing Elizabeth for the past 16 years – I know that she has decided to put one foot in front of the other and move on and be strong for her boys and not end up in Ferncliff.”

In our Interview with Joseph Julian Soria, who plays Private First Class Hector Cruz on “Army Wives,” Soria shared with Hollie Deese how he was approached for the role. “I was in the gym like usual and checked my emails real quick and realized I had an audition in an hour and a half and just ran home. It’s funny – it was one of those moments that actually could have been in a film where everything that could go wrong did go wrong. My printer didn’t have any ink so I couldn’t print out my lines. I was all stinky from the gym but I didn’t have any time to take a shower and just rushed to the audition. That night they said they wanted to see me back tomorrow for a chemistry read with the woman they were casting as my wife, Alyssa Diaz. So I went in there and did that and booked the job and before I knew it I was on a plane to South Carolina.”

If you missed them check out Soaps.com’s November Soap Opera Interviews.