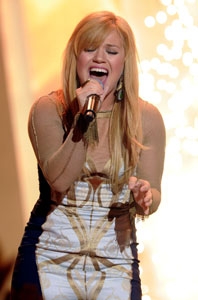 Kelly Clarkson gets engaged, Hugh Jackman gets a Hollywood star and Marilyn Manson gets to keep his ear in this week’s Celebrity News.

Kat and Kelly get engaged!
Tis the season for betrothals and the banns are all over Twitter. Celebrity tattoo artist Kat Von D (“L.A. Ink”) and boyfriend, DJ Deadmau5 (aka Joel Zimmerman) got engaged this past week. This is the second engagement for Von D, who temporarily split from the Canadian DJ in November. Von D accepted Deadmau5’s skull-motif diamond proposal via Twitter. Singer Kelly Clarkson is also showing off a long-awaited sizeable canary yellow diamond sparkler of her own as she and her man Brandon Blackstock revealed their plans to marry. Blackstock reportedly designed the ring himself with the help of jeweler Johnathon Arndt.

I can’t wait for Christmas so…. Katherine Von Drachenberg, will you marry me? @thekatvond twitter.com/deadmau5/statu…

Mi corazon!!! Thank you all for the lovely congratulations! Please excuse me while I go squeeze the hell out of my fiancé! ❤

I’M ENGAGED!!!!! I wanted y’all to know!! Happiest night of my life last night! I am so lucky and am with the greatest man ever 🙂

More baby news!
People magazine’s Sexiest Man Alive, Channing Tatum (“Magic Mike”) is about to become a sexy dad. The actor – who reportedly plans to take a year break to pursue directing ventures – and his wife Jenna Dewan-Tatum (“Step Up”) recently announced that they were happily surprised to discover that they are expecting their first baby. At the start of the year, Dewan-Tatum reportedly spoke to US Weekly of her excitement at starting a family of their own, saying “I just don’t know when. When it’s meant to be, it will happen.” Well, it’s happening! Actor James Marsden (“30 Rock,” “X-Men”) knows a thing or two about family. Marsden, who has two children with ex-wife Lisa Linde (ex-Ali McIntyre, “Days of Our Lives”), recently welcomed his third child with ex-girlfriend, Brazilian model Rose Costa. While their relationship was short-lived, Marsden is reportedly being very supportive. And, fresh from her Golden Globe Best Actress nomination for “Homeland,” actress Clare Danes (“Stardust,” “Romeo + Juliet”), Marsden’s co-star in the upcoming 2013 movie release “As Cool as I Am,” is embracing new motherhood after delivering her first son with husband Hugh Dancy (“Black Hawk Down”). And finally, no, Jennifer Aniston is not pregnant with twins!

Unapologetic Rihanna.
Who needs a boyfriend who ping-pongs back and forth between his ex and you when you’ve got a famous rapper willing to gift you a getaway car and enough money to honeymoon solo with your best friend on your own island villa paradise? She may be brazen and a little naughty, but singer Rihanna isn’t spending her time moping over her reported break-up with Chris Brown after images allegedly surfaced showing his wild partying in France with tour girls and a supposed reunion dinner with not-so-ex ex-girlfriend Karrueche Tran. While Rihanna did vent about the whole affair on Twitter, the newly ‘single’ singer has reportedly capitulated to all the supposed roaring about how Brown is bad news for her career, not to mention that he is still on probation for his assault on her in 2009. As a reward for finally listening to reason, rapper Jay-Z reportedly gifted Rihanna with a brand new $200,000 Porsche 911 Turbo, although some reports suggest Rihanna bought herself a silver Ferrari. Either way, she can probably park her new ride in the driveway of her newly purchased $12-million, 11,000 square-foot, seven-bedroom, nine-bathroom mansion in the Pacific Palisades.

All I see is signs, all I see is dolla $ign$ instagr.am/p/TaFJZ5BM9x/

Is Tom Cruise moving on?
Rumors are swirling that actor Tom Cruise (“Jack Reacher,” “Mission Impossible”) has set his eyes on actress Jennifer Akerman (“Rock of Ages”), actress Malin Akerman’s (“The Watchmen”) younger sister. Cruise was reportedly spotted looking quite cozy and engrossed in conversation with the actress at an after-party at the Rose Club in Stockholm, Sweden to celebrate his new film “Jack Reacher,” out Friday December 21. The “Rock of Ages” co-stars were reportedly enjoying champagne and each other’s company – even disappearing momentarily – until the wee hours. Sources say both actors are denying any romantic relationship as Akerman seems to already have a boyfriend in Los Angeles.

Simon adores Carmen?
It’s music mogul Simon Cowell’s (“X-Factor”) time to gush. A few weeks ago model/actress and singer Carmen Electra (“Baywatch”) confessed on the “Today Show” that she “adored” Simon Cowell whom she first met when she was a guest judge on “Britain’s Got Talent.” Well, Cowell’s gone one step further to say Electra’s the adorable one and that while she isn’t his girlfriend, they are “dating.” Cowell opened up to Ryan Seacrest earlier this week in an attempt to explain the reported frequent sightings of him and Electra dining out, making out and holding hands. “Not my girlfriend” – yeah right!

Taylor brings Harry home.
It’s only been a month, but nothing says “we’re solid” more than a trip to the tattoo parlor and an overnight stay at your girlfriend’s house. According to US Weekly, singer Taylor Swift and One Direction crooner Harry Styles are proving they’re inseparable as they were spotted out for a shopping trip with Swift’s mother, Andrea. Meeting his girlfriend’s mother for the first time, Styles reportedly stayed close and spent the night. Earlier a supportive Swift was reportedly seen holding the hand of Styles who went to the Shamrock Tattoo Parlor in Los Angeles to get inked again – this time with a pirate ship on his tricep.

Fake fringe for Kim Kardashian.
No one can cause a stir like Kim Kardashian. If it’s not her reportedly widely fluctuating bodyweight, it’s her booty and now it’s her bangs. When an understated, make-up light Kardashian showed up in arrivals at Los Angeles International Airport, photographers were quick to capture her new hairdo for the entire world to see. Of course, fans had to comment on Kardashian’s website, prompting her to confess her hairstylist’s secret – clip-ons! Apparently, Kardashian kept the look after getting styled for a Cosmopolitan magazine photo shoot by hair transformer Chris McMillan, who also cut Miley Cyrus’ hair and created Jennifer Aniston’s famous “Rachel” coif for “Friends.”

Hugh Jackman's Hollywood star.
Actor Hugh Jackman ("X-Men") is entering the holiday season on a high note after receiving a star on the Hollywood Walk of Fame earlier this week. Jackman who stars in "Les Misérables" together with Anne Hathaway ("The Devil Wears Prada"), Russell Crowe ("Gladiator") and Amanda Seyfried ("Mama Mia"), was also honored with a Screen Actors Guild nomination for this role in the musical as well as a Golden Globe Awards nod. The actor seems determined to remain grounded despite his success. While on the "Katie" show to promote the movie, Jackman recently shared his wife's struggle with failed in-vitro fertilization, her painful multiple miscarriages and their eventual decision to adopt. The couple has two children.

Marilyn Manson almost loses his ear.
A violent brawl in Switzerland sent singer Marilyn Manson to the hospital earlier this week with severe injuries to his ear. Details are limited, but doctors had to use 24 stitches to reattach the performer's ear after he was reportedly hit with a glass table. The singer, who posted a picture of his bandaged appendage on Twitter, is currently on his Twins of Evil tour with rocker Rob Zombie.

I was hit by a glass table in a dangerous fight. I was however, the victor but had to have 24 stitches to keep my ear from becoming Van Goth

Lindsay Lohan's generous friends.
Despite the negative headlines, the IRS breathing down her neck, her unpaid $16,000 storage bill, and her reported overall unprofessionalism, there seems to be no shortage of goodwill toward actress Lindsay Lohan ("Liz & Dick"). Actor Charlie Sheen ("Anger Management"), who claims he is still waiting for a thank you, reportedly lent a generous $100,000 to the beleaguered actress to help ease her financial woes. Singer Max George of the boy band The Wanted has reportedly kept up a chummy presence with Lohan in an effort to keep an eye on her. And, earlier this week, actor James Franco (ex-Franco, "General Hospital," "Spring Breakers") expressed his dismay over Lohan's frequent troubles with the law, adding that he too tried to help her, but lost touch with the actress shortly after filming and directing the 2011 music video for R.E.M.'s song "Blue." Franco reportedly told MTV that he feels sorry for the actress, citing that the publicity surrounding her scrapes and predicaments may be derailing her efforts to make a legitimate screen comeback.

Jessica Simpson looking for new digs.
Newly pregnant Jessica Simpson is reportedly looking for a new home to decorate with fiancé Eric Johnson and accommodate her growing family. According to Life & Style magazine, the singer/designer and busy mom has made an offer to buy the Osbourne family's $13 million California country mansion, in the exclusive Hidden Hills neighborhood. The 11,000 square foot property features six bedrooms and 10 bathrooms. Simpson, who is the latest spokeswoman for Weight Watchers, recently revealed her dramatic post-baby weight loss shortly before announcing her second pregnancy.

Ke$ha's confusing comments.
After her song "Die Young" was pulled from radio airplay due to inappropriate and ill-timed lyrics out of respect for the victims of gun violence in Newtown, Connecticut, singer Ke$ha sounded off on Twitter disclosing everything from her empathy and understanding to laying blame and coercion. Her Twitter remarks have since been deleted. According to TMZ, the outspoken entertainer is trying to dissociate herself from the song, claiming that she had "issues" with the lyrics and "was forced to sing" them. However, TMZ also reports that Ke$ha backed the lyrics in an earlier interview with New York radio station 95.5 WPLJ in November: "I definitely make sure that every word rings true to me because I would never want to misrepresent myself to millions of people around the world ... I wrote and wrote and rewrote that song ten times."

Justin Bieber's blunder.
Beware of giving gifts with four or more legs! Singer Justin Bieber has landed himself in hot water with the California Hamster Association (CHA) after gifting his pet hamster to a fan at one of his concerts. According to TMZ, a spokesperson for the CHA declared that, despite his good intentions, Bieber committed an act of animal cruelty. Apparently, the commotion created by a screaming fan is toxic to the hamster and could prove fatal. The spokesperson added that Bieber had options and should have secured a new home for the supposedly unwanted hamster at an animal shelter or rescue center.

Love "Nashville?" You're going to love it a whole lot more when you find out what ABC has in store for the popular series in this week's Soaps.com Primetime Dish. Plus, check out what's coming in the winter premiere of "Pretty Little Liars" in Soap.com's Pretty Little Liars Spoiler Video.