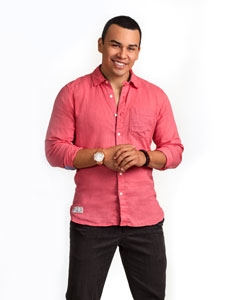 “I have plans for a big year.”

It has been a busy year for Joseph Julian Soria and 2013 is shaping up to be another blowout. Last year Soria joined the cast of Lifetime’s hit drama “Army Wives” as Private First Class, Hector Cruz, an all American soldier deeply in love with his wife, Gloria (Alyssa Diaz).

About to begin its seventh season, “Army Wives” is getting completely revamped with Kim Delaney exiting and Sally Pressman taking a backseat in the series. This leaves room for new characters to have larger storylines, including Hector and Gloria. Soria took some time away from celebrating his father’s birthday to speak with Soaps.com about how he got the role of Hector and his new movie “Filly Brown,” which premiered at the 2012 Sundance Film Festival. “Filly Brown” also features Latin recording artist Jenni Rivera, who died earlier this month in a tragic plane crash after one of her concerts.

Soaps.com: How were you originally approached about the role of Hector?

Soria: Through an audition. I was in the gym like usual and checked my emails real quick and realized I had an audition in an hour and a half and just ran home. It’s funny – it was one of those moments that actually could have been in a film where everything that could go wrong did go wrong. My printer didn’t have any ink so I couldn’t print out my lines. I was all stinky from the gym but I didn’t have any time to take a shower and just rushed to the audition. So I ended up going straight there, looking at the material for a little bit and went in. That night they said they wanted to see me back tomorrow for a chemistry read with the woman they were casting as my wife, Alyssa Diaz. I had previously worked with Alyssa, not on screen but in auditions, and so I was familiar with her work and we had a good chemistry. So I went in there and did that and booked the job and before I knew it I was on a plane to South Carolina.

Soaps.com: We hear your role is expanding this season. Is there going to be more of a focus around Hector and Gloria?

Soaps.com: Your film "Filly Brown" has been in the works a while now. Tell us about it.

Soria: It is a special film. I got the opportunity to work with a good friend of mine, Gina Rodriguez, and of course Edward James Olmos and Lou Diamond Phillips. Meeting and getting to talk with Edward James was great and having him compliment my work was amazing. It was a great honor to work with the people I got to work with. I didn’t get to work with Jenni Rivera on set. I just met her at an award ceremony. Unfortunately, her passing happened but I am glad she got to be a part of the project.

Soaps.com: Tell us about your character in the film, MC Wyatt.

Soria: Quite simply, he is an assh*le. That is the best way to put it. He has had to fight for everything he does and I have to back him up, that is my job. From MC Wyatt’s perspective, he would do whatever he could to hold onto the spotlight that he had. And I think I did my job. People really hated my character.

Soaps.com: You’ve had quite a few films premiere at Sundance, including "Filly Brown." What has that experience been like?

Soaps.com: Do you have any other upcoming projects?

Soria: For four months I will be out in Charleston working on "Army Wives" and after that we’ll see what comes up. But I have plans for a big year.

Read about who else will be popping up this season when "Army Wives" returns in Soaps.com's Primetime Dish. Then make your voice be heard by voting in Soap Opera Fan Blog's Soap Opera Polls, including one about what Stephanie's message might mean on "B&B."