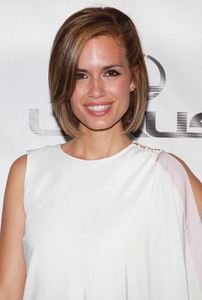 There is a lot set to take place in Primetime television during the week of December 24, as well as a few scoops for before and after. This week’s Primetime Dish column highlights episode teasers, casting scoops, repeat CW episode alerts, and a few more ‘wives’ added to a Lifetime drama…

Army Wives:
Interview! Soaps.com’s Hollie Deese recently chatted with the actor who plays Hector Cruz. In our Interview with Joseph Julian Soria, when asked what’s ahead for his character and his wife Gloria (Alyssa Diaz), Soria stated “There is definitely going to be more drama. I don’t want to say too much but just expect more drama. They are still going on a roller coaster of a ride, learning about each other and learning about what they want.”

Beauty And The Beast:
On Thursday December 27 at 9:00 PM the CW will air a repeat of its November 1, 2012 episode titled “Basic Instinct.” In casting news… Sendhil Ramamurthy (“Covert Affairs”) has landed a recurring role on the series as an assistant district attorney named Gabe. Stay tuned for his airdate and the series return at 9:00 PM, Thursday January 24.

Castle:
Soap fans, remember to tune in on Monday January 7 at 10:00 PM for an all new episode featuring “General Hospital’s” Nancy Lee Grahn on Castle, as well as Jack Wagner (ex-Frisco, “GH;” ex-Nick, “The Bold And The Beautiful”).

Dallas:
After the series premieres on January 28, 2013 Soaps.com will again be writing recaps from each Sunday episode. Until then read highlights from the original series’ seasons past in our Dallas News Room.

House Of Lies:
Adam Brody (“Good Vibes,” “The OC”) has been cast to appear as an adult toy company owner in Showtime’s upcoming season two. Look for his character in scenes with Jeannie (Kristen Bell). The series returns Sunday January 13 at 10:00 PM. Watch a video teaser for what’s set to come.

Justified:
The FX series has cast “Lost” alum Sam Anderson (Bernard) as a funeral director for a multi-episode arc during season four, which returns on Tuesday January 8 at 10:00 PM.

Leverage:
Season finale! In TNT’s Tuesday December 25 10:00 PM episode titled “The Long Goodbye Job” Nate investigates a case surrounding his son’s death, and the team is led into a risky and deadly con.

Nashville: The Whole Story:
The ABC special will air on Wednesday January 2 at 10:00 PM. Look for special clips following the tales of the show’s characters as they make their way through life, love and their careers.

Pretty Little Liars:
Watch a preview of the season premiere through our PLL Spoiler Video: Trouble For Aria and read Soaps.com’s recaps each Tuesday, starting on January 8 at 8:00 PM, after the show airs.

Raising Hope:
During FOX's February sweeps look for Emily Rutherfurd ("Christine") as Kelly and Brian Doyle-Murray ("Motorcity," "The Middle") as a TV studio president. The series airs Tuesdays at 8:00 PM.

Revenge:
Catch up on last season's Revenge Recaps and stay tuned, as Soaps.com will be writing recaps after each Sunday episode as well as posting weekly spoiler videos.

Rizzoli & Isles:
Season finale! On Tuesday December 25 in the TNT 9:00 PM episode titled "No More Drama In My Life" Maura is asked for a life-altering favor. Jane worries about Lt. Col. Casey Jones' spinal surgery. Tommy shows off baby T.J., and loved ones are trapped when a building collapses.

Second Star To The Left:
Hugh Laurie ("House M.D.") lends his voice as Archie the Bunny in the CW's Monday December 24 9:30 PM holiday animated special. When Santa loses some presents, a hamster, a rabbit and a guinea pig make it their mission to deliver them.

Supernatural
Wednesday December 26, at 9:00 PM, will bring viewers a repeat of the CW's October 3, 2012 episode titled "We Need To Talk About Kevin."

If it's strictly spoilers you're looking for view our Primetime TV Spoilers to find out what Nina Sharp is needed for in "Fringe" then vote in Soap Opera Fan Blog's Soap Opera Polls, including one on the future of "Y&R's" Kevin and Chloe.