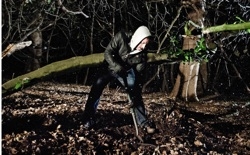 The holiday season is bringing lots of drama as one character is taken in a new direction on “Coronation Street,” a murder takes place on “Emmerdale” and an affair is revealed on “Hollyoaks.” There’s lots to look forward to in the upcoming weeks.

Coronation Street:
Spoiler alert: Big things are in store for Nick, who is about to marry his fiancée Leanne on Christmas Day. While it remains to be seen if she will go through with the wedding, considering her unresolved feelings for her recently returned ex Peter, Nick’s life will take a turn that has nothing to do with the love triangle.

Things have not been going well for Kylie and David recently. He wants a baby, she doesn’t. She thinks he had a fling with his ex. He didn’t. It gets even worse for the marrieds when Kylie actually does sleep with someone else. In true soap fashion, David reassures her of his love after she’s done the deed, but will it be too late for them?

EastEnders:
The Masood matriarch is leaving Albert Square, as actress Nina Wadia announced she is quitting the show. Wadia has played Zainab Masood for five years, but has decided to move on from the BBC soap. The character will reportedly not be killed off.

Spoiler alert: Cousins Lauren and Joey recently enjoyed a short-lived secret romance. It ended when Joey’s dad Derek blackmailed his son into ending things. But now that Derek is getting killed off, Joey returns to the woman he loves. However, his ex and Lauren’s friend Lucy finds out and becomes furious. Lauren tries to explain, but gets into more hot water when she confesses about the car crash she caused but Joey took the blame for. Outraged, Lucy heads for the police station. Will she spill the truth to the cops?

Emmerdale:
Spoiler alert: After Cameron confesses his crimes to someone, he panics and takes them hostage. He knocks him out and then ties them up in his van. When the victim tries to make a break for it, Cameron ends up killing them. He buries the body in the woods, cleans up and then returns to Chas, who wants to be with him. It turns out Debbie still wants him back too. But when his van goes missing, neither woman could get what she wants if he ends up in prison.

Jai’s a dad but he can’t share the good news with anyone considering he’s with Charity, but fathered a child with Rachel. Rachel won’t let him see his baby, causing his mood swings to become too much for Charity to take. When she doesn’t get a satisfactory answer about what’s up, she leaves him and starts digging for answers.

Hollyoaks:
Spoiler alert: During a Christmas celebration, Jacqui looks through her late husband's phone and finds a video of him in bed with Cindy, who is a guest at her house. Jacqui is out for revenge and is later found standing over Cindy's unconscious body.

Leanne confides in Dennis about how lonely she feels while on a New Year's Eve bender. She wakes up with him the next morning, not knowing if they've actually slept together or not. While that remains to be seen, Dennis does declare his love for her. Will she return the sentiment?

Home and Away:
Spoiler alert: As the winter finale wrapped up, Heath was left on a sinking dingy in the middle of the ocean. Will he survive? Watch what's to come in 2013 in the Home and Away spoiler video.

The New Year will also introduce new characters Spencer and Maddie who arrive with big secrets. They will reportedly be part of the show's efforts to return to their roots of telling fostering storylines when they show up on Roo and Harvey's doorstep. More drama will ensue when their brother Chris shows up as well.

Neighbours:
Spoiler alert: When 2013 rolls around, Vanessa feels uncomfortable knowing Lucas has feelings for her and does her best to avoid him. Until she's forced to see him at Sonya and Toadie's engagement party that is. She'll be a busy lady, as the other man in her life Rhys won't accept they're over and vows to fight for her.

Rani knows about her mother Priya's affair and remains suspicious despite her insistence it's over. When Rani starts to rebel, Priya fears the secret will get out and tear her family apart.

Could it still be true? Are AMC & OLTL migrating online? Read about the latest developments on Soaps.com and go to Soaps Digest Column on Soap Opera Fan to keep up with all the U.S. Daytime Dramas.