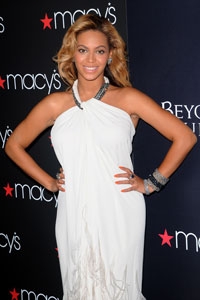 Beyoncé’s beverage brand.
She’s back! Singer/actress/designer Beyoncé Knowles (“Dreamgirls”) has reportedly signed a $50-million multi-year endorsement deal with cola giant Pepsi’s ‘Live for Now’ campaign, that will see her in TV commercials, various promotional spots and as the face of a limited edition Pepsi can to debut early next year. The good people at Pepsi also reportedly sweetened the pot with a promise to invest in and collaborate with Knowles in her future creative projects. The carbonated contract comes at a keen time for the busy mother of baby Blue Ivy, and wife of rapper Jay-Z as she is slated to perform at the Super Bowl XLVII halftime show in early February and also has a new as-yet unnamed album next year. In a statement to the New York Times, a very satisfied Knowles said, “Pepsi embraces creativity and understands that artists evolve … As a businesswoman, this allows me to work with a lifestyle brand with no compromise and without sacrificing my creativity.” And speaking of creativity, catch this sneak peek of Beyoncé’s new autobiographical documentary which premieres on HBO on February 16 2013.

Stars battling cancer.
While in the middle of making appearances in premiere after premiere of his latest film “The Hobbit: An Unexpected Journey” actor Sir Ian McLellan (“The Lord of the Rings,” “X-men”) recently revealed that he had been diagnosed with a non-threatening form of prostate cancer about seven years ago. The 73-year-old actor also divulged that despite his initial fears, he hasn’t had any treatment for the disease, adding that his frequent check-ups have helped maintain his health and contain the spread of the disease. There’s good news also for TV host Brooke Burke-Charvet (“Dancing with the Stars”), who announced via Twitter that her thyroidectomy surgery to remove her thyroid cancer went very well.

Thank God it’s over. I’m clean, surgery went well & I can talk. Losing My voice was my biggest fear. Thx for all your prayers & light.

The troubled house of Sheen.
Last week, generous Charlie Sheen (“Anger Management,” “Two and a Half Men”) reportedly donated $75,000 to help the daughter of a police officer who is suffering from Childhood Rhabdomyosarcoma (CR). A few weeks ago he told “Entertainment Tonight” that he also gave a reported $100,000 to thankless actress Lindsay Lohan to help her sort out her tax mess. Surely one good turn deserves another. Ex-wife Denise Richards has reportedly agreed to look after Sheen’s twin three-year-old boys with ex-wife Brooke Mueller while she is in rehab – for the nineteenth time – for an addiction to Adderall, an ADHD drug. Mueller reportedly made the decision to try rehab again after she was found unresponsive while taking a nap in her home. Richards shares two daughters with Sheen and has apparently stepped in before to try and maintain some familial order.

Carly Rae Jepsen hacker arrested.
A Vancouver man has been arrested for allegedly hacking into singer Carly Rae Jepsen’s computer and stealing nude photos. Christopher David Long, who is facing several charges, including identity fraud and possession of stolen property, turned himself into police earlier this week and is due to appear in court on January 4. According to TMZ, Long was trying to sell the nude images to several media chains. Jepsen is no doubt feeling relief and just in time too. The singer has been nominated for two Grammy’s and three People’s Choice Awards.

Kate Middleton pregnancy and prank call update.
Since being released from the King Edward VII Hospital after being treated for acute morning sickness, the Duchess of Cambridge has begged off attending a few functions while she recovers at home in relative calm. Sadly, however, the family of Jacintha Saldanha continues to feel the heartbreak over her apparent suicide. Saldanha was the nurse who transferred the prank call made by two Australian radio DJs posing as the Queen. Detectives say Saldanha, who leaves two teenage children and a husband behind, was found with injuries to her wrists and had apparently hung herself with a scarf. She also left behind three suicide notes that detectives are hoping to analyze. Meanwhile the two radio hosts have reportedly said they anguished over Saldanha’s suicide.

Hayden splits from Scotty.
Actress Hayden Panettiere ("Nashville") and her New York Jets free agent boyfriend Scotty McKnight have reportedly ended their relationship over long-distance woes. According to TMZ, the couple, who were dating for about a year and half until two weeks ago, has decided to remain friends. Panettiere who is enjoying tremendous success playing Juliet Barnes on her new country-music inspired Primetime show was on hand to host the "Country Music Awards" last week. The actress will also appear in next month's Esquire magazine bikini photo shoot, revealing her fun, flirty and humorous side.

Jennifer Lawrence most desirable.
Crediting her authenticity and freshness, the editors at AskMen have named actress Jennifer Lawrence ("Silver Linings Playbook," "Hunger Games") as the website's most desirable woman, bumping last year's winner Sophia Vergara. According to the New York Daily News, AskMen editor-in-chief James Bassil suggested that the results of this international poll could be linked to Lawrence's youth and originality in the business, adding that "She hasn’t had the time to crash and burn in front of the paparazzi."

Anne Hathaway's wardrobe regret.
Anne Hathaway ("Les Misérables," "The Devil Wears Prada") is mega apologetic after cameras caught her exiting her vehicle at the New York premiere of "Les Misérables" sans underwear. The actress, it seemed, was doomed to suffer the embarrassment as her bondage-themed heels probably had gawkers slowly moving from her feet upward to admire the tight, black slinky number she chose to wear. With no explanation as to why she forgot to wear panties, Hathaway allegedly did express a modicum of shame to a Vanity Fair writer, saying "It was devastating. They saw everything. I might as well have lifted up my skirt for them."

Madonna's extreme PDA.
One question: Why? With four children, a body that won't quit, and a career that still titillates the masses, singer Madonna is way past having to impress anyone. But that doesn't mean we can't offer a 'tsk tsk' to unimpressive behaviour. Earlier this week the 54-year-old singer and her 25-year-old boyfriend Brahim Zaibat engaged in a no holds barred game of tonsil hockey while performing on stage, in Porto Alegre, Brazil. At some point, the audience is going to wonder what they paid for and came to see – Madonna teaching her younger lover how to French kiss or Madonna showing she's still got the pipes to put on a fierce performance.

Shenae Grimes engaged!
Actress Shenae Grimes ("90210") is engaged to her British model-boyfriend Josh Beech. According to US Weekly, Grimes and Beech have been dating for nine months and plan to wed in England sometime next year. Read Grimes' happy tweet to her fans.

Justin Bieber murder plot thwarted.
Fan or foe? In a plot that could rival a "Law & Order" episode, singer Justin Bieber is no doubt wondering about the dangerous price of fame. The singer and his bodyguard were allegedly targeted in a kidnapping, murder and castration plot, after it was discovered earlier this week that a convicted rapist and killer, serving time in a New Mexican prison, allegedly hired two other inmates to carry out the deed. The inmates reportedly were to commit their crime shortly after Bieber's Madison Square Garden concert performance, but somehow before then the convicted killer and mastermind behind the whole murder plot, Dana Martin confessed all to police who later arrested the two convicts, Mark Staake – who had a few tools for the murder on him at the time of his arrest and Staake's nephew Tanner Ruane, who was apprehended on outstanding warrants.

Lindsay Lohan flirts with jail and romance.
Actress Lindsay Lohan ("Liz & Dick") is broadly smiling these days after being arrested for assaulting a woman who allegedly offered her a psychic reading at New York's Club Avenue a week ago. The reason could be her reported budding romance with singer Max George of The Wanted who seems to be balancing her penchant for getting into trouble with a little friendly supervision. While Lohan denies striking the woman, ever since her arrest, Lohan has been seen traipsing off to wherever the band goes to perform a gig – and she is reportedly screaming gleefully like the average fan. Despite the presence of her new BFFs however, Lindsay may have a hard time grinning through the latest news that her probation over her jewellery theft has been revoked after a new set of charges involving Lohan lying to police about her car crash into a dumpster in Los Angeles were made. Lohan faces possible jail time and it doesn't end there. Her storage unit fees are overdue - $16,000 overdue - and if her accounts remain frozen by the IRS, she may have to surrender her valuables to auction.

Find out which Oscar-winning actresses will be starring in the holiday film "Noel" in this week's Soaps.com Primetime Dish. Plus, catch up on the latest episode of "Revenge" in Soap Opera Fan Blog's Revenge Recap Revelations.

TCM Partners On Documentary About Search For Long Lost Orson Welles’ Cut Of ‘The Magnificent Ambersons’; Will Debut On 80th Anniversary In 2022