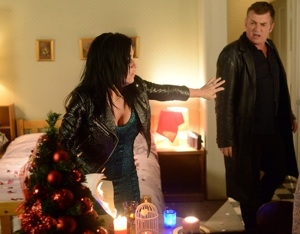 New affairs on “Coronation Street,” loneliness bonds two characters on “Hollyoaks” and a fake wedding falls apart on “Neighbours.” Get caught up with what’s happening on soaps from across the pond.

Coronation Street:
Spoiler alert: A new couple will emerge when Tracy and Rob start hooking up next year. While there may be some attraction between the schemer and the bad boy, they’re also hoping their tryst ruffles the feathers of the true objects of their affections Steve and Michelle.

Kirsty plans a surprise party for Tyrone’s 30th birthday, but it looks like she’s blown off the milestone. Fiz stops by her pal’s place to help him celebrate and one thing leads to another. As the exes turned friends kiss, Kirsty shows up for Tyrone. Things could turn pretty ugly for Tyrone if his abusive fiancée catches him with Fiz. Here’s hoping he can hide her in time.

EastEnders:
Spoiler alert: A suspicious Alfie tells Kat he’s heading out of town. But instead, he sticks around and follows Kat to the room where she used to meet her lover. When confronted, Kat insists the mystery man hasn’t accepted they’re over so she’s there to put an end to it once and for all. While there, Alfie spots a paper with the man’s name on it. Will he finally learn who Kat’s former lover is, or will Kat spring into action and prevent that from happening?

The secrets are coming out this Christmas on “EastEnders.” Take a look at all the drama that’s to come in the video below, which might not be available in all areas.

Emmerdale:
Spoiler alert: Rachel goes into labor despite the fact that she isn’t due for a couple more months. The labor reportedly goes smoothly, but her son isn’t in the clear just yet. Even though Jai still wants to keep the fact that he is the father a secret, he stops by to see his child. Will Rachel allow the visits to continue?

Even though she didn’t do it, Chas stands trial for Carl’s death and her scorned niece Debbie plans to make sure she goes away for the murder. Still reeling from her aunt’s affair with Cameron, Debbie intends to present damning testimony against her when she takes the stand.

Hollyoaks:
The British soap will once again be seen in Australia and New Zealand. In 2013, “Hollyoaks” will join the UKTV network, which airs “Coronation Street,” “EastEnders” and “Emmerdale.”

Spoiler alert: Brendan takes a trip to Ireland in hopes of seeing his sons at Christmas. Unfortunately, his ex Eileen won't let that happen, but the boys don't seem to have any interest in seeing dear old dad anyway. As he watches them all leave at the bus station, he runs into a familiar face: John Paul. The two bond over their loneliness. Could they be each other's cure?

Home and Away:
The soap is currently on Christmas break in Australia and will follow suit in the UK on December 14, with a return planned for early January. While the season finale already aired last week in Australia, UK viewers won't see it until February 15.

Spoiler alert: This week, UK viewers will see Bianca mourn the loss of her baby and push her son's father Heath away. Everyone thinks she's on the mend though when she shows up looking good for a SIDS fundraiser. However, it's all an act, as she later begs Heath for drugs to numb her pain. He refuses, so she looks elsewhere.

Neighbours:
Spoiler alert: Vanessa's fake wedding day arrives, but she decides she can't marry the father of her child Lucas at the last minute. She confesses the truth to her mother, who disowns her, as Vanessa feared. Rhys swoops in sensing they are finally free to be together, but she pushes him away.

Sarah is returning to Erinsborough, but her reasons don't have anything to do with Karl, whose relationship to Susan she helped wreck years ago. However, she will reportedly get into business with Paul, who recently had an affair with Priya.

Get the lowdown on U.S. Daytime dramas in Soaps.com's Soaps Spoiler Digest and read about former "B&B" star Kyle Lowder in Rock of Ages on Soap Opera Fan.