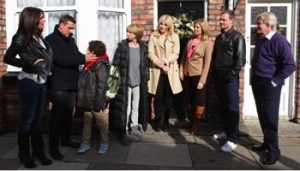 Two long running secrets are exposed on “EastEnders,” Cameron adds another victim on “Emmerdale” and two women go into labor on “Neighbours.” The drama doesn’t stop there, as there’s more soapy goodness ahead on shows from across the pond.

Coronation Street:
Spoiler alert: Peter and Carla return to Weatherfield, just as Peter’s ex Leanne and Nick are planning their wedding. The engaged duo wants to take Leanne’s son Simon with them for their wedding in Las Vegas, but he wants to stay behind with his dad Peter. Leanne won’t go without Simon, so they call the whole thing off. Peter isn’t deterred though, as he plans a Christmas Day ceremony.

Tyrone is desperate to take his daughter and leave his abusive partner Kirsty. Since she oh, so conveniently left Tyrone off the birth certificate as Ruby’s father, he plans to marry her in order to secure his parental rights. However, something sets Kirsty off and she physically takes it out on Tyrone, sending him to the hospital. Does Kirsty learn about Tyrone’s affair with her nemesis and his good friend Fiz, or does something else cause the outburst? More importantly, will Tyrone get out of his relationship alive?

EastEnders:
Spoiler alert: Things are about to get ugly between the Branning brothers, as Max discovers Derek has been blackmailing his fiancée Tanya. Derek feels disrespected when confronted by Max and turns on him by exposing the secret he has been keeping for the past year in front of the whole family. Christmas will get even worse when Derek turns up dead.

Another long held secret is about to be exposed when Alfie grows suspicious that his wife Kat is still cheating on him. Her ex-lover will finally be revealed as one of the Branning brothers on December 20, sending Alfie over the edge. He forgave her once, twice might be asking too much.

Emmerdale:
Spoiler alert: After Brett lost his job upon making a pass at Rhona, Rhona hires her old friend Vanessa to replace him at the vet clinic. Paddy’s none too pleased with Vanessa’s presence though, as he is privy to her loose reputation and worries she’ll have a negative effect on Rhona.

Cameron killed Carl last month, but his lover Chas has been charged with the crime. The guilt becomes too much for Cameron and he confides in someone that he should be the one standing trial. Unfortunately for the mystery character, that confession will cost them their life, as Cameron strikes again.

Hollyoaks:
Spoiler alert: Doug and Ste's life together might be over before it could really get started. When Doug's father becomes sick, he decides to move back to the States to be with him. Ste isn't exactly eager to stand by his man, as he turns to his ex Brendan. Ste pleads for a reunion and they share a kiss, but then Brendan punches him. So, that's a no?

The McQueen family will have a Christmas to remember when a baby is left at their doorstep. While they try to figure out who the baby is, Jacqui invites Tony and Cindy to the Christmas festivities, unaware her late husband Rhys was sleeping with Cindy. Tony is well aware though. Will he spill the beans?

Home and Away:
Casting news: Charlie may have died from gunshot wounds in January, but her portrayer Esther Anderson is on her way back to the set. She will reportedly film a few episodes that will air next year. Could Charlie be alive, or will she just pay someone a ghostly visit?

"Home and Away" won't air new episodes in Australia until January. Until then, take a behind the scenes look of Harvey and Roo's wedding in the video below, which might not be available in all areas.

Neighbours:
Spoiler alert: Vanessa's water breaks, but her baby's father Lucas is unable to be there. However, Vanessa's ex Rhys is happy to step in and help her deliver the baby. Once Vanessa's child is born, Rhys declares his love and pops the question. It's either the best or worst timing in the world.

Another couple is welcoming a child into their lives, as Sonya goes into labor. It's a long one though, leaving Toadie worried they're doing it with a doula at home instead of with doctors at the hospital. Sonya insists everything's fine, but is it?

Keep up with all the holiday specials and seasonal breaks in Soaps.com's Primetime TV Listings. What are Sami and EJ doing on the floor together? Find out in Soap Opera Fan's DOOL Spoiler Video.