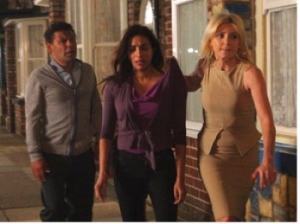 This week in British and Australian soaps, a plan is hatched to escape an abusive relationship, a dead man is made a scapegoat in court and someone is left for dead. Stakes and emotions are running high, so keep up with what’s to come on dramas across the pond.

Coronation Street:
Spoiler alert: Shobna Gulati is planning to leave the British soap next year, but first, her character Sunita must deal with her doubts regarding her lover Karl. When she fears he’s cheating on her, Sunita turns to his ex Stella, who urges her to kick the scoundrel out. Having experienced his bad boy ways, Stella knows of what she speaks.

Things are looking worse for Tyrone, who receives one of Kristy’s worst beatings yet. Not trusting Tyrone, Kirsty takes his phone and keys, locking him in their home when she leaves for work. When he discovers his phone in her bag, she goes ballistic, but this time doesn’t apologize for the abuse afterwards, instead demanding he be the one to say sorry. Not able to take it anymore, Tyrone decides to leave town with baby Ruby, but Fiz might have a better plan.

EastEnders:
Spoiler alert: Shirley’s back and none too happy to hear Phil is pretending to be engaged to Sharon in order to get baby Lexi out of foster care. She’s especially upset when she learns Ben, who killed her friend Heather, is the father of said baby. Shirley threatens to expose his scam, as does Sharon’s boyfriend Jack. That’s enough for Phil, who tells the social worker he and Sharon have called it quits. Will he still be able to gain custody of his granddaughter?

Casting news: Rob Kazinsky, who played Sean Slater from 2006 – 2009, has joined the HBO series “True Blood” as a faerie named Ben. In addition, Scott Adkins, who played Joel in 2003, can be seen in “Zero Dark Thirty” when it hits theaters December 19. Take a look at the trailer below for the film about the military’s quest to eliminate Osama bin Laden.

Emmerdale:
Spoiler alert: After Rhona catches her beau Paddy in a lie, new veterinarian Brett swoops in. He suggests she deserves better and goes in for a kiss. Will Rhona be receptive to his advances or stick it out with Paddy?

Declan blames himself for Katie falling down the well and lashes out when the town holds a vigil. In a twist, it’s Katie’s nemesis who suggests the villagers head up their own search. While it remains to be seen if Katie will finally be rescued, Nikhil stirs things up by wondering if Megan still wants revenge for being cheated out of the music festival’s profits by Declan and Katie. Maybe not since she’s growing closer to Declan during the crisis.

Hollyoaks:
Spoiler alert: As Mercedes goes on trial after framing Mitzeee for attempted murder and staging a fake kidnapping of baby Bobby, she decides to use Riley as a scapegoat. She gets an assist from Doctor Browning who suggests on the stand that Riley could have killed Lynsey as well. Too bad Riley’s dead and can’t defend himself.

Watch Scarlett Bowman’s exit interview after her character Maddie was killed in the bus crash. The video might not be available in all areas.

Home and Away:
Spoiler alert: Though broken up, Brax and Natalie share a kiss before "Home and Away" wraps its 2012 season finale on November 28. However, a reunion may not be on the horizon, as the troubled Brax fears it's best for her if he stays away. He may regret thinking that as her ex-boyfriend turns up next year.

The finale week will also see Jamie targeting someone in the Bay on his father's orders. Leah has already left town due to his creepy stalking, but someone else might not get out alive, as after Jamie's interference, one character is left for dead out at sea.

Watch what's to come in the season finale video promo, which might not be available in all areas.

Neighbours:
Casting news: Ben Barber, Jordan Smith and Kaiya Jones, who play Rhys, Andrew and Sophie respectively, are all headed off the canvas. In a statement, "Neighbours'" executive producer Richard Jasek said the three characters would leave a legacy on the show before their emotional exits next year. He went on to say 2013 would take viewers on a rollercoaster ride.

Spoiler alert: Though their identities are being kept hush-hush, one of the show's fan favorite couples is getting hitched. In a bit of a tease, the characters of Callum, Lucas, Kyle and Rhys were all at the filming of the nuptials. Will any of them walk down the aisle?

Read about the season finale of "Boardwalk Empire" in Soaps.com's Primetime TV Spoilers. Do you empathize with Victoria after meeting her mother? Read Soap Opera Fan's Revenge recap.