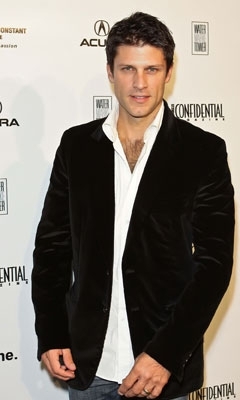 Soaps.com’s November interviews had one Genoa City actor talking about his character’s cyber-bullying storyline, another sharing where his Salem character, who’s now a priest, is heading in regards to a certain damsel in distress, and one Primetime actor sharing a bit about his Lifetime role and working with actress Lindsay Lohan.

Hollie Deese chatted with a “Days of our Lives” newcomer – though he’s not new to soaps. In our Greg Vaughan Interview the actor talked about his character as a priest and whether or not Nicole DiMera (Ari Zucker) will affect that. “It is going to have its hardships but with anything in life, if you make a decision to do whatever you do in life, you better be strong on that decision. I think he made a choice in life for the right reason and he stuck to it and he is committed to that. And it would be devastating and contradictory to his profession, his occupation, if he broke a vow… They [Eric and Nicole] just have something. But they do have history, which is great. They have this thing and he is there with purpose.”

Candace Young sat down with a “The Young And The Restless” newcomer about his new role, how the cyber-bullying storyline hits home, and which co-star shared their Thanksgiving dinner with him. In our Max Ehrich Interview when asked what viewers can expect from Fen Baldwin as the storyline progresses Ehrich shared, “I think that everyone is emotionally going to go on a roller coaster. I think the viewers are not going to know who to…everyone’s motives are not bad, that’s the sad thing about the whole bullying story in the show. No one’s really, truly trying to hurt someone else – it’s out of a place of their own hurt – so I think everyone’s going to go on an emotional roller coaster with us. Things are very intense, and I think people are going to feel it.”

Did you watch last Sunday’s Lifetime premiere of “Liz & Dick?” Soaps.com’s Hollie Deese talked to the actor who played Martin, the manager of the Dorchester Hotel. In our Henry Hereford Interview he expressed what it was like to work with Lindsay Lohan. “She knows what she is doing and she has amazing instincts because she has worked for most of her life as an actor on screen. It was good for me to learn from someone who is very comfortable in front of the camera. It is always great to be able to work with people who I guess have more experience because you always learn from them.”

If you missed them check out our October Soap Opera Interviews.

View Soaps.com’s Top 20 Dropped Storylines to see if any of the ones you’ve wondered about made our list. If you missed last Sunday’s episode read Soap Opera Fan Blog’s Revenge Recap: Lineage.