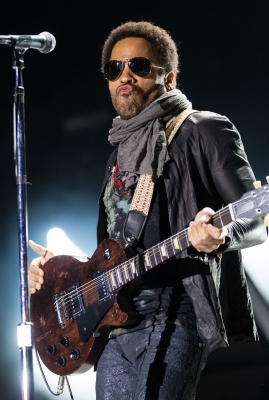 Justin and Selena make-up, Paris Hilton faces a backlash, and Kim K works on those last ten pounds in this week’s Celebrity Gossip.

As long as you love me Jelena!
Pop star Justin Bieber and girlfriend, Disney actress Selena Gomez are reportedly back together after they were seen showing some post-American Music Awards after-party PDA. The couple was reportedly spotted with their hands fused together outside Bootsy Bellows in Hollywood after a whirlwind week of break-ups and make-ups. Both stars are heading into the holidays on a high with Bieber fresh from winning AMAs in all three categories for which he was nominated, as well as his sold-out Believe tour and Gomez, padding her fashion resume by becoming the latest global ambassador/designer for Adidas NEO – for which boyfriend Bieber is also a spokesmodel. Check out Bieber’s cheeky Girlfriend fragrance commercial for Macy’s department store.

Lenny Kravitz as Marvin Gaye?
Rumor has it that musician/actor Lenny Kravitz (“The Hunger Games,” “Precious”) has been cast as iconic soul legend Marvin Gaye in a biopic to be directed by Julien Temple (“London: The Modern Babylon”). According to London newspaper The Evening Standard, the film is tentatively titled “Midnight Love” after Gaye’s final studio album of the same name. Kravitz will portray Gaye during his later years as he was suffering through alcoholism and living in tax exile in Belgium. In 1984, Gaye was tragically shot to death by his father in after a heated altercation.

Drug charges dropped for Bon Jovi’s daughter.
With the law and loving parents by her side, it appears Stephanie Bongiovi is getting a second chance. The daughter of rocker Jon Bon Jovi is no longer facing drug possession charges following her widely reported heroin overdose last week. Bongiovi was hospitalized after being found unconscious in her Hamilton College dorm room during the wee hours following a call to 911, made by fellow student, Ian Grant, who sources say, was just arrested last month for drug possession. Both Bongiovi and Grant are protected by the so-called Good Samaritan 911 law which encourages overdose victims and anyone seeking help for overdose victims to call emergency without the fear of being prosecuted for having small amounts of heroin or any amount of marijuana. With his daughter, reportedly in rehab and not set to return to college until the New Year, singer Jon Bon Jovi has reportedly spoken out about the incident to Fox 11, revealing that the family had no idea of his daughter’s drug use but are rallying around her and will “get through it.”

Beckham bending his last ball?
With his eye on a possible team ownership someday, world-famous soccer star David Beckham announced in a statement that after six years, he would play his last game for the Los Angeles Galaxy soccer team on December 1 against Houston Dynamo. Beckham, who began his professional career in his native England with Manchester United soccer club and later Real Madrid, thanked his L.A. fans, and insisted that he was not retiring but instead hoping for a final challenge. With an estimated $40 million in endorsements, Beckham’s is sure to seek the counsel and support of his wife Victoria as he considers possibly re-locating his family and fulfilling a new role in the upper echelons of soccer hierarchy. The former Spice Girl knows a thing or two about career transitions as she has easily reinvented herself as a successful fashion designer and recently released her Victoria Beckham Ready-To-Wear Spring/Summer 2013 collection.

Buzz-worthy birthday!
Actress Christa B. Allen (Charlotte Grayson, “Revenge”) created quite a buzz as she celebrated a milestone birthday last week with family and friends atop the roof of the Petit Ermitage hotel in West Hollywood. According to US Weekly Allen, who turned 21, reportedly kicked off the festivities with her first legal drink – a champagne, gin, and rose cocktail called “Bumble Bee” that she and a bartender co-created. Sponsored by Juicy Couture, Allen donned a black dress from the label to coincide with the party’s black and white theme. The actress, who reportedly told the magazine that she is looking forward to her life’s adventures post-21, also turned her celebration into a charitable opportunity for Hurricane Sandy relief as she asked that, in lieu of presents, guests donate to the Mayor’s Fund to Advance New York City.

Home is where the heart is for Aniston and Theroux.
Blissfully engaged actors Jennifer Aniston (“Wanderlust,” “Friends”) and Justin Theroux (“American Psycho,” “Megamind”) are reportedly planning to walk down the aisle and right into their $21 million Bel Air home in time for the New Year. The renovations on the 8,500 square foot palatial mansion that the couple purchased earlier this year are slowly materializing – with the most recent feature reportedly initiated by Aniston to replace the vineyard on the property with a pool and Jacuzzi. The Smart Water spokesmodel is also reportedly shopping for furniture. Unlike their dream home construction, sources say the couple’s wedding will be a low key affair with about 50 close friends and family in attendance.

Lindsay Lohan reviews and red carpet mistakes.
The weekly headlines keep coming for actress Lindsay Lohan. From the professional dis to journalist Barbara Walters ("The View"), to her father's recent revelation that she has a half-sister, to her heavily critiqued performance as screen legend Elizabeth Taylor in Lifetime's "Liz & Dick" which airs Sunday November 25, Lohan is fielding criticism from all sides. When the actress recently arrived at the Beverly Hills hotel for a private dinner to celebrate the premiere of the movie, her red-carpet wardrobe likely made for filling appetizer conversation. Lohan's gown was a revealing, slinky, plastic-looking cut-out number that was saved only by her artfully applied make-up and elegantly coiffed red locks. Her co-star Grant Bowler who plays Richard Burton in the movie, recently admitted to "Access Hollywood Live" that coping with the drama that surrounded the actress was challenging and "an exercise in patience and tolerance."

Hollywood not always so gleeful for Amber Riley.
In an emotional interview for the MTV series "This Is How I Made It", "Glee" actress Amber Riley reportedly acknowledged her 14-year struggle with body image in Hollywood adding that "Hollywood is a very hard place to be." Riley, who plays Mercedes on the musical series, tearfully opened up about the paltry acting roles for black women of a certain size, her failed auditions and repeatedly being asked to lose weight. It weighed heavily on her self-esteem. Dejected but defiant and determined not to "play a character that hated herself," Riley recounted how she finally received her dream role. Riley is currently making her Broadway debut in "Cotton Club Parade." Watch a clip of Amber Riley's interview.

Katy Perry getting cozier with John Mayer.
It's got to be serious if he's been invited home. Pop star Katy Perry was spotted on a romantic outing with her blues-singer boyfriend, John Mayer in her hometown of Santa Barbara, California this week for a tour of The Old Mission – a 200-year-old church and cemetery. The famous duo was casually understated as they hung out and posed for pictures and enjoyed a self-guided tour of the Mission grounds. Sources say, Perry is keen to stick around longer than Mayer's previous celebrity dalliances, despite a short-lived break-up with the singer in August. With a church in the mix, is she moving too fast?

Paris Hilton's holy invasion?
Location. Location. Location. And perhaps a bit of targeted market research might have warned socialite Paris Hilton away from the latest venue for her brand name luxury goods shop. After tweeting her excitement over her recent store opening in Saudi Arabia, the hotel heiress faced considerable opposition and outrage from Muslims in reaction to the venue being in the holy city of Mecca. The Mecca Mall location is one of five locations that Hilton owns in Saudi Arabia and a mere handful of the 60 stores she has worldwide. Following boyfriend River Viiperi's recent arrest, Hilton's infamous sex-tape scandal, hard partying reputation and all that comes with it is reportedly seen as an insult to the Muslim community. Hilton reportedly earns over $10 million a year from sales and is worth an estimated $100 million. And she does have some nice handbags. Check out the promo for the Paris Hilton handbag collection.

Bialik divorces and Simmons separates.
Actress and attachment parenting advocate Mayim Bialik ("The Big Bang Theory") and former model and fashion mogul Kimora Lee Simmons ("Life in the Fab Lane") recently announced they were splitting from their significant others this week. Citing "irreconcilable differences," Bialik is ending her marriage after nine years and shares two children with husband Michael Strone. Simmons has officially separated from actor Djimon Hounsou ("Blood Diamond") after five years of dating. The pair met in 2007 following her divorce from music producer Russell Simmons, with whom Simmons has two daughters. In 2008 Hounsou and Simmons participated in a traditional commitment ceremony in Hounsou's native Benin. They share a three-year-old son.

Jackie Chan retiring?
Hong Kong action star and stuntman Jackie Chan ("Rush Hour") has reportedly confirmed that he will be retiring from action movies following the filming of his upcoming film Chinese Zodiac 2012, which also stars Oliver Platt ("The Big C"). Citing tiredness and age as factors, the 58-year-old Chan is reportedly looking forward to being the director, writer and producer of his last official action film. In an interview with The Telegraph earlier this year, Chan revealed that he hopes to pull in roles outside of the action genre, closer to an "Asian Robert DeNiro." Chan's dynamic martial arts moves have been depicted in over a hundred movies during his 40-year career. Rumor has it that with a "Rush Hour 4" sequel possibly in the works, Chan's action star days could be delayed.

Kim K gets new keys and hits the gym.
Reality star Kim Kardashian ("Keeping Up with the Kardashians") and her sister Kourtney were awarded ceremonial keys to the city of North Miami this week. The sisters no doubt feel vindicated after being forced to relocate their show "Kim and Kourtney Take Miami" from Miami Beach to a rented bayfront North Miami mansion after residents reportedly griped about it. Meanwhile, according to US Weekly Kanye West's boo has reportedly turned to fitness trainer Tracey Anderson to help her "shed 10 pounds and tone up." Anderson has famously worked with celebrity actresses like Gwyneth Paltrow ("Iron Man"), singer Jennifer Lopez ("The Back-Up Plan"), Ashley Greene ("Twilight") and Madonna.

Voice of Elmo resigns amid sex scandal.
In a shocking brain twister, puppeteer Kevin Clash also known as the voice of Elmo resigned this week after more allegations about sex with underage boys arose. Last week Clash settled his lawsuit with Sheldon Stevens, a male model who claimed they had sex when Steven's was 16. Clash insisted their relationship took place when Steven's was of age and was between two consenting adults. Stevens has since recanted but now wants to undo the settlement. A second lawsuit for $5 million filed by Cecil Singleton accuses Clash of grooming him for underage sex after they met through a gay chat line. As a result of these recent allegations and the growing controversy Clash decided to resign to remove the focus on the "Sesame Workshop" and turn it toward a private resolution. Clash has won nine Daytime Emmys and one Primetime Emmy for his portrayal of the cherubic red furry Muppet over the last 28 years. A company spokesperson for "Sesame Street" is reported to have released a statement assuring audiences that the scandal will not be the end of Elmo.

Are you a "Game of Thrones" fan? Find out when the series returns to TV in this week's Primetime Dish. For a sneak peak at what's set to happen in the community of Rosewood, check out Soap Opera Fan Blog's Pretty Little Liars spoiler videos.