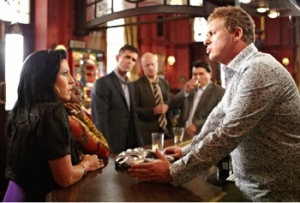 A surprising new love triangle on “Coronation Street,” a life-threatening situation on “Emmerdale” and proof of an affair on “Neighbours” are just the tip of the iceberg. Get a look at what’s to come on UK and Australian soap operas.

Coronation Street:
Spoiler alert: Sophie was hit by a car a while back and is in need of a physiotherapist. Lucky for her, Lloyd’s new adult daughter Jenna takes over that job. Rumor has it, despite their 10-year age gap, the two will develop feelings for each other. Age differences aside, this might shock Jenna’s parents who she hasn’t come out to yet. Not only that, but Sophie’s dad Kevin will reportedly also fall for the attractive therapist. Sounds good and soapy.

David is a stepfather to Max, but he’s ready for a baby of his own. Kylie reluctantly agrees when her husband brings up the idea, but fearing they aren’t stable enough to bring another child into their family, she secretly stays on the pill.

EastEnders:
Spoiler alert: The secret over who Kat has been having an affair with has been looming for months. It will eventually be revealed in a Christmas episode as her husband Alfie goes for one of the Branning brothers’ throats. In that moment, Kat pipes up that he’s got the wrong brother.

The Masoods may have said goodbye to their son Syed and his husband Christian, but they are welcoming a new houseguest. Family friend Ayesha will move in with the clan as she prepares for her arranged marriage. However, she will find she’s used to a more posh lifestyle and quickly finds herself out of her comfort zone.

Emmerdale:
Spoiler alert: Cain and Moira are on the road to a reunion, but hit a roadblock when he stands her up to help his family. Pride gets in the way as they both try to pretend they don’t care afterwards, but their chemistry can’t be denied and they end up in a passionate kiss.

Katie’s fall down a mineshaft places her in grave danger when she shatters her pelvis. Not only can she not walk, but she falls a second time placing her out of earshot of her rescuers. As Katie attempts to drag herself to safety, her loved ones hold a candlelight vigil for her. Will she make it out alive?

Hollyoaks:
Spoiler alert: Just as Ally is about to sleep with Lacey, Lacey's mother Martha discovers his true identity. Or at least that he has stolen someone else's. Turns out Ally has taken over a dead soldier's name and had been lying to everyone all this time. Will Martha get to the pair before Lacey loses her virginity to the con artist?

Dodger is busy looking for his biological father and sister, leaving his girlfriend and family in the dark. Probably a bad idea considering when Texas spots him with his sister, he lies that he's cheating on her rather than let his family know what he's been up to. Even though he tells his brother Will the truth, they get into it over another matter. Upset over Dodger, Will and Texas turn to each other and have sex. Will is going to have a lot of explaining to do when Texas learns he knew Dodger wasn't cheating on her.

Watch the interview with actor Andy Moss, whose character Rhys perished in the bus crash storyline.

Home and Away:
Spoiler alert: As Roo and Harvey's wedding day approaches, Roo starts to get cold feet. Watching Harvey lose his temper doesn't help matters, but she eventually puts her fears aside and marries the man she loves. Now that they're married, the next step is kids. While they might not work on having their own, they will look into becoming foster parents in the new year.

Also on tap for next year, the show will focus more on Summer Bay High storylines. They are said to be adding more younger characters to the cast.

Take a look at Wednesday's episode, as Brax contemplates double crossing Kyle. The video might not be available in all areas.

Neighbours:
Spoiler alert: Is love in the air once again for Tash and Andrew? Could be, as after she's helped him through his epilepsy ordeal and he steps in for her with an overeager suitor, they end up in a kiss. They're both affected by it, but it remains to be seen if either of them do anything about it.

Rani has been suspicious of her mother lately, despite Priya's insistence she isn't having an affair. Rani gets proof though when she searches Paul's phone and discovers text messages proving their connection. Even though Priya and Paul have called things off, will Rani blow their worlds apart?

Discover who makes a confession on "Days of our Lives" in Soaps.com's Soaps Spoiler Digest and who returns to pay their respects to Edward in Soap Opera Fan's General Hospital Spoilers.