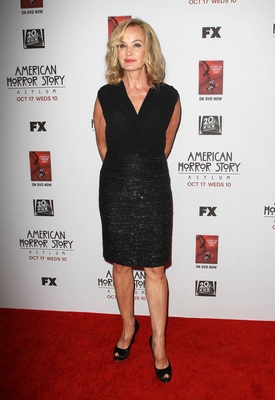 There is a lot set to take place in Primetime television during the week of November 26, as well as a few scoops for before and after. This week’s Primetime Dish column highlights episode teasers, casting scoops, ABC cancellations, tennis stars on “CSI,” an interview with Henry Hereford of Lifetime’s “Liz & Dick,” and which longtime “Army Wives” actress is leaving the show for good.

666 Park Avenue:
Due to low ratings ABC has cancelled its freshman drama. Tune in Sundays at 10:00 PM for the remaining episodes.

American Horror Story:
Renewal! Come the fall of 2013 fans will get to see thirteen more hours of the FX miniseries, as the network has just signed on to continue the story into season three. Jessica Lange, (“The Vow”) who played Constance in season one, will be returning – as to who she’ll play is a big mystery. For now, continue to watch details unfold on “American Horror Story: Asylum” Wednesdays at 10:00 PM.

Army Wives:
Huge spoiler alert! Kim Delaney will be leaving her longtime role as Claudia Joy Holden come season seven, which premieres sometime in 2013. Now for the kicker as to how she’ll leave the Lifetime series… turn away if you don’t want to be spoiled… Okay, we warned you… Delaney’s character will be killed off. Claudia’s demise will be revealed during the first two episodes of the season opener. The actress has been with the show since 2007.

Beauty And The Beast:
In Thursday’s November 29 9:00 PM CW episode titled “Out Of Control” JT thinks Vincent may be involved in Cat’s homicide investigation and is forced to tranquilize him. A strange cut on a victim’s ankle matches that of a female cadaver, and Evan is kidnapped.

Boss:
Cancelled. Kelsey Grammer’s Starz original series has been cancelled by the network after just two seasons. If you’d like to revisit season two, check your local listings as replays air Fridays at 9:00 PM.

CW-ountdown To CW-istmas:
It’s never too soon to prepare for some upcoming Christmas specials and the CW has a peek for viewers of what’s set to come next month.

Emily Owens, M.D:
In Tuesday’s November 27 9:00 PM CW episode titled “Emily And… The Question Of Faith” Emily and Tyra discover their infant patient has a condition, which forces her parents to make a difficult decision. Dr. Bandari’s patient finds his faith shaken after a risky surgery. Will breaks protocol and upsets Micah, and just as Tyra is finally ready to tell her father the truth about being a lesbian, she gets shocking news of her own.

Games Of Thrones:
Return Date! The HBO series will return with season three on March 31, 2013.

Gossip Girl:
It's all about getting what you want in the November 26 CW 9:00 PM episode titled "Save The Last Chance." Monday Episode Teasers: Serena and Dan know they have to atone to the people they have wronged. Blair comes up with a plan to prove her worth to her mother, and one of Chuck's closest allies reveals his plan.

Hart Of Dixie:
Some are about to get a dose of reality in the CW's November 27 8:00 PM episode titled "Achy Breaky Hearts." Tuesday Episode Teasers: Zoe and Lemon have a difficult time accepting Lavon and Ruby’s new relationship. In order to avoid awkwardness with George, Wade agrees to supervise a Little Ranger’s camping trip, and Brick realizes something shocking when he wants to take the next step in his relationship with Emily.

Hunted:
In Cinemax's Friday November 30 10:00 PM episode titled "Khyber" Sam makes a startling revelation about her past. A shocking discovery exposes someone to dangers, and Byzantium discovers something potentially devastating regarding the dam.

Last Resort:
Another ABC series has been cancelled due to low ratings. Tune in Thursdays at 8:00 PM as the series runs its course.

Leverage:
The TNT series returns with all new episodes on Tuesday November 27 at 10:00 PM. In the winter premiere titled "The Low Low Price Job" the crew comes up with a plan in order to stop a big-box mega-store from destroying a small town. Watch the promo for more…

Liz & Dick Interview: Henry Hereford:
Lifetime's highly anticipated film based on the romance of Elizabeth Taylor and Richard Burton, starring Lindsay Lohan, will premiere on Sunday November 25 at 9:00 PM. Soaps.com's Hollie Deese spoke with Henry Hereford, who was sent to audition for the role of Martin and was offered the role two weeks later. "He is the manager of the Dorchester Hotel in London which is one of the oldest hotels and it is still sort of one of the most prestigious hotels today. Elizabeth Taylor and Richard Burton are living there and are put up by one of their movies. So he has to oversee them and is very 60s UK, he has been trained in a very stiff upper-lip way. He provides a lot of humor because they know he finds it sort of difficult. At different times he has to fight against them and Elizabeth Taylor is very – she did exactly what she wanted and he has to cope with that. It is a very serious movie and my scenes provide a comic element to it."

When asked if he's a fan of Elizabeth Taylor’s work, Hereford stated, "I am. I think she is an incredible actress. I have sort of become a little more familiar with it since I worked on the movie. I didn’t know as much before. She is an icon but I hadn’t watched hundreds of her films or anything like that."

All of Hereford's scenes are with Lindsay Lohan, who plays Elizabeth. "She knows what she is doing and she has amazing instincts because she has worked for most of her life as an actor on screen. It was good for me to learn from someone who is very comfortable in front of the camera. It is always great to be able to work with people who I guess have more experience because you always learn from them."

Though the actor doesn't have any current films coming out, Hereford talked about an independent movie co-starring Dean Cain ("Superman"). "I play a German. It is a funny movie and that will be out early or mid next year. I have also recently just finished shooting a short film which was again very different because I was playing a criminal psychologist who didn’t believe this guy had murdered his father. It is only a 10 minute film but I was really attracted to the script because it was a lot of dialogue but it also made me sit in one room like an interrogation. That will be sent out to festivals around the country and can do really well."

He would love to return to television and has had a fair number of auditions over the last few weeks. "I think it is the golden age of television and I think it is every actor’s ambition to be getting into television. It is definitely a huge credit to you as an actor and leads, more than it did 10 or 11 years ago. Actors are getting roles in movies because of the following they are having in television now. The success of something like 'Breaking Bad' - Bryan Cranston obviously had a huge body of work before but now I have seen him in probably 12 movies since. I think because people love the show that people would go see a movie because it has a guy or girl from a TV show that they love. So yes, television is where my representation and where we feel. Having said that you are never closed off to whatever the role is when it comes up in a movie or television. If a great role comes up and you are right for it, it doesn’t matter if it is television or a movie or voice over."

Nikita:
The Division is threatened in the CW's November 30 8:00 PM episode titled "The Sword's Edge." Friday Episode Teasers: Division discovers one of their rogue agents who's been undercover for six years is planning to kill the President of the United States. Nikita and Michael must figure out how to save the President’s life, and Alex and Owen believe an insider set up the explosion.

Once Upon A Time:
Chad Michael Collins ("Last Resort") has landed a guest starring role in episode twelve of season two as Dr. Whale's (David Anders) brother Gerhardt. Tune in to ABC Sundays at 8:00 PM.

Partners:
Cancellation. CBS has cancelled its new series, due to low ratings since its September 24 premiere, effective immediately.

Revenge:
In case you miss an episode read our Revenge Weekly Recaps.

Rizzoli & Isles:
Here's a sneak peek of the TNT drama, which returns with all new episodes on Tuesday November 27 at 9:00 PM. In the winter premiere titled "Class Action Satisfaction" Angela and Stanley come under scrutiny when a man dies after being poisoned. Tommy wants proof he’s the father of Lydia’s baby, and Detective Korsak sees one of his ex-wives.

Supernatural:
Cartoons aren't always funny in the November 28 CW 9:00 PM episode titled "Hunteri Heroici." Wednesday Episode Teasers: Sam and Dean find out that Castiel has decided to become a hunter. They aren’t sold on the idea but agree to investigate a case and discover more than one odd murder has occurred in a small town and all of them resemble cartoon deaths.

The Hollywood Christmas Parade:
On Monday December 10 from 6:00 PM to 8:00 PM the Hallmark Channel will air the annual parade with Joe Mantegna ("Criminal Minds") as Grand Marshal. The parade will benefit Marine Toys For Tots and will have many actors in attendance including Candace Cameron Bure ("Full House"), Natasha Henstridge ("The Secret Circle"), Mark Steines ("Medium"), Susan Sullivan ("Castle"), Lou Ferrigno ("Adventure Time") and Louis Gossett, Jr. ("Psych"), as well as actors from "Days of our Lives" and "Glee."

Web Therapy
Good news for fans of the Showtime series, starring Lisa Kudrow ("Friends"), as the network has signed on for season three.

If it's strictly spoilers you're looking for view our Primetime TV Listings to find out what Alicia’s mother is looking for over the holidays on "The Good Wife" then view our Revenge Spoiler Video: Lineage to see who's not welcome at Victoria's during the upcoming Thanksgiving episode this Sunday.

Ginny & Georgia Trailer: It's Not Easy Having a Hot Mom in Netflix's Dramedy