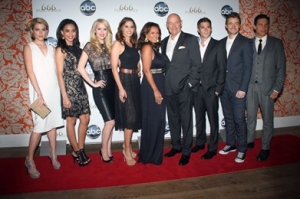 Here are this week’s spoilers. Keep in mind however, that sometime after Wednesday evening parades and college football games break out leaving us with a few evenings of disturbed Primetime viewing. Enjoy the turkey and pie at least.

2 Broke Girls: And The Three Boys With Wood.
Andy finds out Caroline comes from money and Max and Caroline have two Amish boys build Chestnut a barn Monday November 19, at 9:00 PM on CBS.

666 Park Avenue: What Ever Happened To Baby Jane?
Jane mysteriously turns up in the middle of Times Square after disappearing, Victor Shaw is Drake’s prisoner in the boiler room, and Brian figures out he is creative because of Alexis somehow Sunday November 25, at 10:00 PM on ABC.

90210: The Con.
Lindsey and Liam may become the brunt of Navid’s jealousy, Annie is interested in Colin despite how Riley feels, and Dixon is suffering from a spinal infection Monday November 19, at 8:00 PM on CW.

Boardwalk Empire: Two Imposters.
Nucky, Eddie and Chalky are hiding out when Gyp and his thugs visit Atlantic City to take over the Artemis Club, Gillian will have to deal with these impending changes, and Richard has a setback Sunday November 25, at 9:00 PM on HBO.

Bones: The Bod In The Pod.
A crime-scene cleanup expert turns up dead and is mysteriously washed ashore in a sealed pod and Angela and Hodgins think Cam may be in a relationship Monday November 19, at 8:00 PM on FOX.

Castle: After Hours.
Castle and Beckett protect a murder witness from the mob but are not fully equipped when they find themselves on the run after an ambush without guns or a phone Monday November 19, at 10:00 PM on ABC.

Covert Affairs: Lady Stardust.
In the third season finale, Annie travels to Amsterdam to rescue a spy, Khalid is in danger of elimination, and Eyal (guest star Oded Fehr, “The Mummy”) becomes a hostage Tuesday November 20, at 10:00 PM on USA.

Criminal Minds: The Wheels On The Bus…
A school bus transporting children disappears near Washington DC and the unit is on the search for it Wednesday November 21, at 9:00 PM on CBS. Guest stars include Andrew James Allen (“The Lovely Bones”), David Gallagher (“7th Heaven”) and Regggie Hayes (“Girlfriends”).

CSI: CSI On Fire.
A possible meteor site in the desert is also the location where five dead bodies are found and Finlay recognizes one of the victims from her past Wednesday November 21, at 10:00 PM on CBS. Dylan Walsh (“Unforgettable”) and Brian Van Holt (“Cougar Town”) guest star.

Dexter: Helter Skelter.
Dexter is looking for Isaak, the Koshka Brotherhood gives Dexter an advantage during their power struggle, and the Phantom Arsonist is in danger of being smoked out by Miami Dade Sunday November 25, at 9:00 PM on Showtime.

Don’t Trust The B—- In Apartment 23: It’s A Miracle.
June is not so sure about her Thanksgiving with Chloe and Chloe’s parents and James finds out that volunteering might mean he has to work when he tries to help out at a soup kitchen for publicity Tuesday November 20, at 9:30 PM on ABC.

Emily Owens, M.D.: Emily And…The Tell-Tale Heart.
Emily is embarrassed by a drug-impaired patient, Emily is set up to date Tyra’s ex, and a transplant patient finds neither of his parents are a match thus revealing a family secret Tuesday November 20, at 9:00 PM on CW.

Glee: Dynamic Duets.
In nearly the only regularly scheduled Primetime show not removed from Thanksgiving, we find Marley, Jake and Ryder in the middle of a love triangle and Blaine running into members of the Warblers. This episode is written by Ian Brennan, rumored to be the show’s funniest writer. Fall in love with “Glee” again this Thursday November 22, at 9:00 PM on FOX. New and old “Glee” fans please stop by and read our Glee Weekly Recaps.

The Good Wife: A Defense Of Marriage.
Alicia and Diane get assistance from a famous liberal lawyer but begin to doubt his sincerity in their client’s best interests and Alicia’s mother is looking for legal and moral support during a Thanksgiving visit Sunday November 25, at 9:00 PM on CBS. Don’t miss Stockard Channing as Alicia’s mother in this episode.

Gossip Girl: Where The Vile Things Are.
Eleanor pressures Blair during a visit, Dan looks for an apartment with Serena, and Chuck seeks incriminating evidence against Bart Monday November 19, at 9:00 PM on CW.

Hart Of Dixie: Baby, Don’t Get Hooked On Me.
Zoe can’t break a boy’s heart until after a high-school football game, Lavon wants to impress Ruby’s grandfather and Lemon considers AnnaBeth for a partnership in the catering business Tuesday November 20, at 8:00 PM on CW.

Hawaii Five-0: Ohuna (The Secret).
A computer hacker’s murder keeps the Five-0 busy and McGarrett works to reunite his mom and sister Monday November 19, at 10:00 PM on CBS.

Homeland: Two Hats.
Saul meets an old friend and hopes to gain info on someone his friend met the day before, a policewoman has a problem with the IRS and Brody gets help from a waitress who has the item he needs Sunday November 25, at 10:00 PM on Showtime.

How I Met Your Mother: The Stamp Tramp.
Marshall makes the mistake of recommending an old law-school buddy to his firm and Barney gets an assist from Robin on the gentlemen’s club Monday November 19, at 8:00 PM on CBS. Joe Manganiello ("Spider-Man") guest stars.

Law & Order SVU: Lesson’s Learned.
Uncooperative school officials interfere in an investigation of sexual abuse at a private school but a retired teacher helps to expose the cover-up, and ADA Barba helps Benson when more victims resurface Wednesday November 21, at 9:00 PM on NBC.

The Mentalist: Black Cherry.
A body turns up with identification indicating he started a new life only a few years prior, the victim’s family seeks revenge, and Jane searches for new leads to Red John Sunday November 25, at 10:30 PM on CBS.

Mike & Molly: Thanksgiving Is Cancelled.
Mike is sick for the holiday but Molly can’t get out of cooking Thanksgiving dinner after Vince invites his brother over for home-cooking Monday November 19, at 9:30 PM on CBS.

The Mindy Project: Thanksgiving.
Mindy cooks dinner at Gwen’s for her and her guests, Mindy’s former blind date and his current girlfriend, and Betsy welcomes Jeremy to her family’s holiday dinner Tuesday November 20, at 9:30 PM on FOX.

NCIS: Shell Shock.
In the conclusion of a two-part episode, a Marine captain with PTSD helps Gibbs search for a terrorist, Abby is looking forward to the NCIS Thanksgiving dinner, and Ziva looks forward to the opera Tuesday November 20, at 8:00 PM on CBS.

NCIS Los Angeles: Skin Deep.
A crime involving a surfer and dead Navy scientist is posted on the Internet, and Kensi and Deeks go after suspects under cover Tuesday November 20, at 9:00 PM on CBS.

Once Upon A Time: Into The Deep.
Cora snatches the compass and David is endangered by Regina and Mr. Gold who are hoping to connect him to Mary Margaret and Emma to get them back to Storybrooke Sunday November 25, at 8:00 PM on ABC.

Parenthood: One More Weekend With You.
Crosby and Jasmine volunteer to organize a school event, Amber learns more about Ryan, and Sarah and Mark have doubts about their relationship Tuesday November 20, at 10:00 PM on NBC.

Private Practice: Apron Strings.
Henry is brought together with his birth mom who is eager to be a part of his life leaving Addison to consider her role as a parent. A former mentor of Addison’s shares a secret Tuesday November 20, at 10:00 PM on ABC.

Private Practice: The World According To Jake.
In a second episode airing this week, Jake’s upcoming meeting with Henry’s social worker has him worrying about his past, James pursues Amelia, and Addison is suspicious in regard to a high-maintenance patient of Jake’s Wednesday November 21, at 10:00 PM on ABC.

Raising Hope: Candy Wars.
The Natesville Annual Thanksgiving Radish Harvest Festival is coming soon and Jimmy tries to win Hope a ride on a Thanksgiving float. A family secret might help him to succeed Tuesday November 20, at 8:00 PM on FOX.

Revenge: Lineage.
This week flashes back to 2006 where Victoria’s mom visits her, Emily meets Aiden on her first mission under Takeda, and Jack’s dad messes with the wrong people Sunday November 25, at 9:00 PM on ABC. Check out our Revenge Recap: Exposure from the last airing.

Revolution: Kashmir.
Charlie and the gang find trouble while heading for Monroe’s lair and Danny’s suspicions of Rachel grow. Control of the world depends on who will have access to the pendent Monday November 19, at 10:00 PM on NBC.

Sons of Anarchy: To Thine Own Self.
Jax is threatened by Clay and tries to put his affairs in order, and Nero has to deal with his former crew Tuesday November 20, at 10:00 PM on FX. This is a special 90-minute episode.

Treme: Tipitina.
The Season 3 finale finds Janette in a clash with Tim over a benefit, Davis plans an exit from music after one last gig with his old friend, and Annie’s album is released Sunday November 25, at 10:00 PM on HBO.