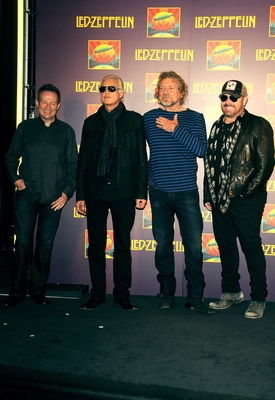 There is a lot set to take place in Primetime television during the week of November 19, as well as a few scoops for before and after. This week’s Primetime Dish column highlights episode teasers, casting scoops, timeslot changes, a big finale return, a few Christmas classics, an annual New Year’s Eve event, and special permission given to a NBC series by the iconic band Led Zeppelin…

90210:
Timeslot change! Starting on Monday January 14 the CW series will be seen in a new 9:00 PM timeslot in order to make room for the freshman series, “The Carrie Diaries,” which will air at 8:00 PM. Until then… Sex, lies and video games consume the November 19 8:00 PM episode titled “The Con.” Monday Episode Teasers: Navid arranges for Liam and Lindsey’s sex tape to be shown in place of Liam’s movie premiere. Annie’s more interested in giving her relationship with Colin a chance verses the fact that Riley has feelings for her. Dixon collapses, and Adrianna learns why.

Beauty And The Beast:
Picked up! If you’re enjoying the CW’s new series we have great news – it’s been picked up for a full season. On Thursday November 22 at 9:00 PM the CW will air a repeat of its October 18, 2012 episode titled “Proceed With Caution.”

Ben And Kate:
Holiday themed episode! On Tuesday’s November 20 9:00 PM episode titled “Reunion” Will encourages Kate to stand up to a high school bully at a reunion held on the eve of Thanksgiving, and Ben doesn’t think he can keep a huge secret. The episode will also re-air on FOX Wednesday December 26 at 8:00 PM.

Chicago Fire:
Pickup! NBC has ordered a full-season pickup for its new series. Tune in Wednesdays at 10:00 PM.

Cougar Town:
Shirley Jones (“Days of our Lives,” “The Partridge Family”) will appear in a guest starring role as a woman, along with her better half, who decides to purchase a house next-door to Jules (Courteney Cox). Look for season four to premiere at 10:00 PM on TBS on Tuesday January 8.

Emily Owens, M.D:
In the CW’s Tuesday November 20 9:00 PM episode titled “Emily And… The Tell-Tale Heart” Emily is the laughing stock of the hospital but tries to be tough about it. A teenage patient needs a partial liver transplant and shocking secrets are revealed when neither parent is a match. Watch a preview below… In casting news, D.B. Woodside (“Single Ladies”) has landed a multi-episode arc as Dr. Gina Bandari’s (Necar Zadegan) husband, Evan.

Frosty The Snowman:
The classic holiday special will air on CBS Friday November 23 at 8:00 PM. Then at 8:30 PM look for the following special “Frosty Returns.”

Gossip Girl:
Kristen Bell (“House Of Lies,” “When In Rome”) is rumored to be making a return for the series finale on Monday December 17 as the voice behind Gossip Girl. Until then, it’s all about the price you pay in the CW’s November 19 9:00 PM episode titled “Where The Vile Things Are.” Monday Episode Teasers: Blair is unprepared for her mother’s demands. Serena and Dan’s time together brings up unforeseen emotions. Chuck enlists Nate’s help to retrieve evidence, and Rufus and Ivy must find another way to make their gallery opening a success.

Grandma Got Run Over By A Reindeer:
On Friday November 23 at 8:00 PM the CW will air a one-hour special based on the holiday song.

Hart Of Dixie:
A little romance goes a long way in the CW’s November 20 8:00 PM episode titled “Baby, Don’t Get Hooked On Me.” Tuesday Episode Teasers: Zoe learns that Max has become infatuated with her. Lemon asks AnnaBeth to start a catering business with her. Lavon tries to win over Sergeant Jeffries but finds out there is another reason Ruby’s grandfather doesn’t want them together. Olympic Gold Medalist McKayla Maroney guest stars as Tonya.

Haven:
Renewed! The Syfy channel has renewed its hit series for a fourth season. Look for thirteen new episodes in 2013. Tune in Fridays at 10:00 PM.

Hunted:
In Friday’s Cinemax November 23 10:00 PM episode titled “Polyhedrus” Sam and Stephen grow closer. The Byzantium team is puzzled by a connection, and Sam makes a revelation about a client.

Nashville:
It's officially a hit! Due to a rise in ratings, with six million viewers, ABC has ordered a full season for its new series. In other news, on Tuesday December 11 Big Machine Records will release the soundtrack from the series featuring music from the cast, including Connie Britton (Rayna), Hayden Panettiere (Juliette), Charles Esten (Deacon), Jonathan Jackson (Avery), Clare Bowen (Scarlett) and Sam Palladio (Gunnar).

New Year's Eve Live:
Already preparing for New Year's Eve festivities? If you enjoy counting down the seconds to the new year tune in to FOX on Monday December 31 as the ball drops and 2013 arrives!

Pretty Little Liars:
Do you want some spoilers for the upcoming season? Watch the Pretty Little Liars January 2013 Spoiler Videos for scoops from the actors until the new season returns to ABC Family on Tuesday January 8 at 8:00 PM.

Revenge:
Dylan Walsh ("Unforgettable," "Nip/Tuck") will appear later this season in a multi-episode arc as Jason Prosser - a rival of Conrad Grayson's (Henry Czerny). As a reminder, the ABC series will not be seen on Sunday November 18 due to the Annual American Music Awards, which runs from 8:00 PM to 11:00 PM.

Revolution:
Partnering up! Led Zeppelin (original members: John Paul Jones, Jimmy Page, Robert Plant and the late John Bonham) has granted NBC and Warner Bros. Television the rights to showcase two of their songs ("Kashmir" and "Since I’ve Been Loving You") in the Monday November 19 10:00 PM episode as a way to celebrate the same-day release of their live concert film "Celebration Day." Watch the trailer below!

Smash:
Liza Minnelli, daughter of the late Judy Garland (Dorothy, "The Wizard Of Oz") has landed a guest role as herself halfway into the upcoming season two. In the NBC episode titled "The Surprise Party" the Broadway actress will sing a duet with Tom (Christian Borle). Tune in Tuesday February 5 at 9:00 PM for the special two-hour season premiere.

The Carrie Diaries:
The CW has announced the premiere date for its new series. Tune in Monday January 14 at 8:00 PM, which is usually the timeslot for "90210." The popular zip code series will move to a new time (9:00 PM) from this date forward.

The Happy Elf:
The CW will air a one-hour special on Friday November 23 at 9:00 PM starring Harry Connick Jr. ("Law & Order"), Carol Kane ("Thanks For Sharing") and Mickey Rooney ("The Red Skelton Hour") that follows Eubie the Elf and his quest to bring Christmas joy to a dreary town called Bluesville.

The Mentalist:
Mary Lynn Rajskub ("How To Be A Gentleman," "24") will guest star as a rehab patient sometime in January. Tune in to CBS Sundays at 10:00 PM.

The Mindy Project:
Hal Linden ("Hot In Cleveland," "The Bold And The Beautiful") will appear in a guest role as a former Army drill sergeant named Manny. Stay tuned for his airdate. Tune in to FOX Tuesdays at 9:30 PM.

Treme:
In HBO's Sunday November 25 10:00 PM episode titled "Tipitina" when Tim finds out Janette is throwing an unauthorized benefit he reveals his intentions, and Tony becomes hopeful that Joey's killer may be prosecuted.

Trooper:
Eion Bailey ("Once Upon A Time") will appear in the lead role of a widowed dad on the TNT pilot. Stay tuned for more details on the pilot as they are released.

True Blood:
Rob Kazinsky ("EastEnders") has landed a series regular role for HBO's upcoming season six, which premieres in June 2013. Look for Kazinsky's character, a faerie named Ben, to hit it off with Sookie (Anna Paquin).

If it's strictly spoilers you're looking for view our Primetime TV Listings to find out who continues to be obsessed on "Grimm" then view our Revenge Recap: Exposure if you missed last Sunday's episode.