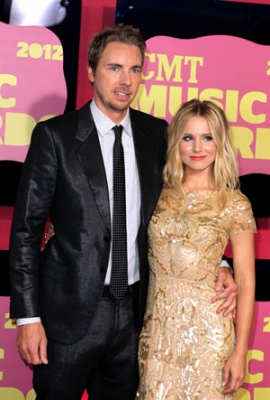 Kristen Stewart’s sexy red carpet fashion, the trouble with Jon Bon Jovi’s daughter and Channing Tatum is this year’s sexiest man all led the news in this week’s Celebrity Gossip.

Kristen Bell and Dax Shepard expecting a baby.
Congratulations to Kristin Bell (“House of Lies”) and her fiancé Dax Shepard (“Parenthood”). The fun-loving couple has been engaged since 2010 and recently announced that they were expecting their first child together this spring. Their impending parenthood, however, isn’t going to hurry them down the altar any time soon. Shepard reportedly told “The View,” back in July that he and Bell would feel awkward about inviting their lesbian and gay friends to a wedding for which they do not have the same right – same-sex marriage is still illegal in California. Meanwhile, rumor has it that Bell, who has just wrapped up voice-overs as the enigmatic narrator for “Gossip Girl,” may make an appearance on the December 17 season finale.

Sexy Channing Tatum.
He proved he had the physique and the moves in movies like “Step Up” and “Magic Mike” and that he could make women exhale in “The Vow” and “Dear John,” but actor Channing Tatum was reportedly surprised that he was named as People magazine’s Sexiest Man Alive. The former model and exotic dancer, who shares GQ magazine cover dibs with a barely clad Rihanna, was also named GQ magazine’s Man of the Year and is slowly getting used to his new title as he shares that his wife Jenna Dewan-Tatum has taken to calling him only by that name. She proudly took to Twitter to show her approval. Tatum is currently training to play an Olympic athlete in the movie “Foxcatcher” set for release next year.

Bon Jovi’s daughter arrested after possible heroin overdose.
It’s likely a shot through the heart for singer Jon Bon Jovi as news that his only daughter possibly suffered a heroin drug overdose made headlines this week. After a frantic call to 911 was made by her friend Ian Grant, Stephanie Rose Bongiovi was discovered unconscious and unresponsive by campus police in her Hamilton College dorm room in Clinton, N.Y., shortly before 2:00 AM. A search warrant reportedly recovered drug paraphernalia, heroin and marijuana. Both Grant and Bongiovi are facing several drug possession charges, as well as Hamilton College policy violations. Sources say Bongiovi has been on a downward spiral with drug abuse for some time as her friends and family have tried unsuccessfully to get her to commit to rehab.

Wendy Williams to Heidi Klum – tsk, tsk!
Outspoken talk show host Wendy Williams (“The Wendy Williams Show”) dispensed a verbal tongue-lashing on Project Runway’s Heidi Klum over her hasty relationship with longtime bodyguard Martin Kirsten. Williams implied that Klum, who separated from her husband, singer Seal earlier this year, was most likely dallying with Kirsten way before the couple’s first public appearance in September. For his part, upon learning of the relationship, Seal initially accused Klum of “fornicating with the help” but later explained that he never meant to suggest that Klum was unfaithful during their seven-year marriage. Williams, however, wasn’t so restrained, sharing with her audience that Seal should get back at Klum with half her money and a hot new girlfriend.

Lindsay bails on Barbara Walters.
Lindsay Lohan, how dare she?! Celebrated interviewer Barbara Walters took to her show “The View” to air her extreme disappointment with the cancellation of her anticipated sit-down with actress Lindsay Lohan (“Liz & Dick”). Apparently, a volcano of change erupted after the actress’ publicist, Steve Honig quit. Lohan apparently has hired a new publicity team – Rogers & Cowan – who were reportedly wary of the personal revelations the actress might reveal in her scheduled one-on-one with Walters. However, they didn’t seem to share these concerns about “Tonight” show host Jay Leno as they went about booking Lindsay for an appearance there. Lohan, who is facing possible jail time for a parole violation, reportedly admitted recently that she lied to her father about her mother’s cocaine drug abuse during a heated domestic dispute between the two. Her television biopic, “Liz & Dick” airs on Sunday on Lifetime.

Hope Solo no longer?
It sounds like an episode out of the “Dr. Phil” show. U.S. women’s soccer team goalkeeper Hope Solo reportedly married her boyfriend of two months, one day after he was arrested for assaulting her. Reports are still unconfirmed, but Solo’s fiancé, former Seattle Seahawks tight end Jerramy Stevens was released from custody on the grounds that there was not enough evidence to charge him with. Despite having applied for the marriage license last week, Stevens and Solo were supposedly arguing over the location of their wedding. The former “Dancing with the Stars” alum is no stranger to roughhousing. In her book Solo: A Memoir Of Hope, Solo accuses dancing partner Maksim Chmerkovskiy of manhandling her.

Kristen Stewart's red carpet Twilight fashion.
Kristen Stewart's red carpet wardrobe at the Los Angeles and London premieres of "Twilight Saga: Breaking Dawn – Part 2" has been a see-through affair. The actress, who plays the heroine Bella Swan, has worn a few stunning frocks by couture designer Zuhair Murad that seem to scream, "I'm happy and I'm all yours, baby!" to boyfriend Robert Pattinson. At the Los Angeles showing of the film, Stewart was beautifully adorned in a sheer, nude-coloured lace creation that showed off her assets – both front and back. Her London look was similarly inspired as she posed for photos and greeted fans and the press in an equally sexy, shimmering, backless black lace jumpsuit that featured perfectly positioned coverings over her derriere and legs.

Hand-picked from Oprah's farm?
Oprah Winfrey is reportedly heading into the organic food and products industry. The media mogul and philanthropist reportedly has big plans for the hundreds of acres of land she owns in Maui which houses a large farm and a bed and breakfast. According to the New York Post, several trademark applications for 'Oprah's Organics,' 'Oprah's Farm' and 'Oprah's Harvest' were filed with the U.S. Patent and Trademark Association. Possible organic products and services include spa-inspired bath, body and hair merchandise, frozen produce and snack dips, as well as a beverage and catering service. Winfrey recently topped Forbes' list of highest-paid celebrities this year and is reportedly worth $2.7 billion, part of which includes the OWN television network, Oprah magazine and Oprah Winfrey Leadership Academy for Girls in South Africa.

Celebrities continue to pitch in.
While the impact of Hurricane Sandy is still being felt by many people along the U.S. East Coast, the stars continue to come out to raise funds, bring awareness to the victims and lend a helping hand in the relief effort. To encourage animal adoptions – many that were rescued from the hurricane – actress Denise Richards ("Anger Management," "Blue Mountain State") adopted a black Labrador mix puppy. Alec Baldwin ("30 Rock") and his wife Hilaria Thomas joined fellow celebs, Kelly Ripa ("Live! with Kelly and Michael"), Brook Shields and her husband Chris Henchy for SoulCycle's Soul Relief Rides charity cycle event to aid victims of the hurricane. Newlyweds Justin Timberlake ("In Time," "Bad Teacher") and Jessica Biel ("Total Recall," "The Illusionist") returned from their safari honeymoon and made their first public appearance as a married couple by volunteering to help with the clean-up, and hand out toiletries, and emergency and medical supplies after reportedly visiting the local CVS, with music producer Timbaland. Their efforts made the Twitter feed with user @kristiray7 posting...

Shout out to @jtimberlake & @jessicabiel for serving along side of us in Rockaway & giving the kids something to talk about besides #Sandy.

Pitt-Jolie kids cause a ruckus?
Brad Pitt may have a handle on his new Pitt-Pollaro furniture collection, but not so much with his six kids and their restaurant shenanigans. Reportedly, it's on purpose. The actor, whose zombie action flick World War Z releases next summer, and his fiancée actress Angelina Jolie ("Salt," "Mr. & Mrs. Smith") intentionally allow for a burst of hell for their busy brood, Maddox, 11, Pax, 8, Zahara, 7, Shiloh, 6, and twins Vivienne and Knox, 4 – whenever they visit Pitt's hometown pizza parlor in Springfield, Missouri. Sources say that Ariss' Pizza makes accommodations for the children by shutting down for the night so they can let loose, jump around and engage in food fights – nanny free.

It's over for Selena but what about Justin?
Even the weather was dreary as news of the alleged split between pop star Justin Bieber and Disney actress Selena Gomez ("Wizards of Waverly Place") made waves last week. While both stars haven't yet publicly confirmed or denied their relationship status, Bieber is reportedly working on a way to win Gomez back. Sources say the strain on their two-year relationship proved too much near the end due to extended time apart and, after Bieber was spotted with 19-year-old Victoria secret model Barbara Palvin at a performance of "The Lion King." Gomez and Bieber reportedly crossed paths for a few hours at a New York hotel prior to Gomez receiving her Glamour magazine Woman of the Year award. But neither side is talking.

Happy feet for Rachel Bilson.
Actress Rachel Bilson ("Hart of Dixie," "The O.C.") recently celebrated the successful one-year anniversary of her online shoe portal, ShoeMint during a cozy brunch with co-star Jamie King and designer/actress/author Lauren Conrad ("The Hills"). The site sends members new shoe styles every month for $80 after surveying their likes and dislikes. ShoeMint is a collaborative effort between Bilson, Nicole Chavez and shoe designer Steve Madden. Bilson, who is engaged to actor Hayden Christensen ("Star Wars," "Jumper"), is also a guest style editor for fashion website Piperlime.

Young and restless love.
Just friends or in love? Rumors of romance were swirling after it was reported that soap actor Max Ehrich who plays Fen Fenmore on "The Young & the Restless" was spotted out for a stroll in Hollywood with "iCarly" actress Miranda Cosgrove. The two were reportedly seen giggling and cozily relaxed with one another. Both stars are enjoying a successful time in their careers with Ehrich involved in a romantic storyline of his own on the popular soap. Cosgrove recently made the Guinness World Record list this year as the highest paid child actress, after earning $180,000 per episode in 2010. Cosgrove has also reportedly begun taping voice-overs for "Despicable Me 2" which will be out next summer.

Check out the upcoming "Gossip Girl" season finale teasers in this week's Primetime Dish as actress Kristen Bell says goodbye to the popular series. Also, find out what big changes are coming for the community of Rosewood in this week's Soap Opera Fan Blog's Pretty Little Liars spoiler videos.