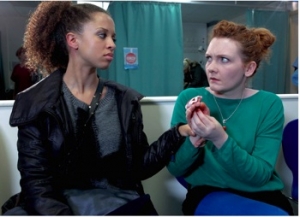 A dangerous ride on Emmerdale. (ITV)

This week, illicit affairs are still the order of the day, but there’s also a murder mystery revving up, near death experiences and a car wreck that almost destroys half a town. It’s edge of your seat stuff, so take a look at what’s to come on British and Australian soaps.

Coronation Street:
Bill Tarmey, who played Jack Duckworth, has passed away. He was 71-years-old. Tarmey, who began playing the character in 1979, was last seen on the show in 2010 as Jack died in his chair after his birthday party at the Rovers Return.

Spoiler alert: Leanne’s divorcing Peter and seeing Nick, who asks her to marry him. She says no, which he feels is due to her still being in love with her ex. She denies it and to prove it, asks him to marry her. Nick readily agrees, feeling he has finally won her from Peter. But will that be true when Peter returns?

Kirsty is none too happy with Fiz’s continued interference in her rocky relationship with Tyrone. Kirsty’s been abusive towards Tyrone and now she targets Fiz by messing with the machine she works on in the factory. Just when Fiz thinks her sewing machine is off, it turns back on and threads her hand. Kirsty privately warns her rival things will get worse if she doesn’t back off.

EastEnders:
Spoiler alert: Derek’s days are numbered as the actor Jamie Foreman is leaving the show. No word on how he goes out yet, but the following story points could lead to his demise.

Worried for his lonely brother, Max tracks down Derek’s old flame and delivers him to her doorstep. His plan backfires though as Jackie isn’t quite the beauty Derek remembered and Jackie is less than thrilled to see her old flame. Derek is left furious by the experience. Will he take it out on his little brother?

Joey and Lauren are cousins, but they are attracted to each other, which obviously makes things complicated. Especially when Joey’s dad Derek sees them kissing. When the duo takes off in Derek’s stolen car, things take a turn for the worse. They get into an accident, ending in an explosion.

Emmerdale:
Lottie Goodwin, who was a background player on "Emmerdale" for 38 years, died with the distinction of being Britain's oldest soap extra. She was often spotted at the Woolpack Pub and Café Hope until she retired in 2011. She was 100-years-old.

Spoiler alert: After a fight with Katie at Home Farm, Declan takes off on his bike to clear his head. Katie races after him, but falls down a mineshaft. Declan tries to save his wife, but his efforts only make things worse.

Hollyoaks:
Spoiler alert: On the day of their wedding, Ste discovers that Doug is in possession of Brendan's confession regarding Danny's murder. He's not pleased Doug is out to harm his ex. There are other worries ahead as Ste is run over by Maddie, who loses control of the mini bus containing an eloping Ruby and an always up for a good time Neil.

Other drama during the big crash includes Myra trying to dissuade Tony from marrying Cindy, while Rhys leaves Jacqui at the wedding to run off with the bride-to-be. It seems Ste won't be the only casualty, as the out of control mini-bus heads towards that wedding party as well. There will reportedly be fatalities in the aftermath. Who will live and who will die? Get a look at the big crash in the dramatic promo below, which might not be available in all areas.

Home and Away:
Spoiler alert: Actress Ada Nicodemou is going on maternity leave, which means she's taking her character Leah with her for a short time. Leah, who has been dealing with stalker Jamie, becomes genuinely frightened of him, especially when he brought her son VJ into the mix. She feels leaving the Bay is her only option, so she packs up and makes her escape next week. Hopefully, Jamie won't be waiting for her when she returns.

Tamara helped Casey through his kidnapping ordeal in the desert, but he never thought he'd see her again. She shows up though to testify on his behalf at the trial for Danny's death. Things continue from there, as Casey develops feeling for her, but there's still his relationship with Sasha to consider.

Get a sneak peek at tomorrow's episode as Casey's brother tries to help his case. The video might not be available in all areas.

Neighbours:
Spoiler alert: After getting suspended from the hospital, Nurse Aidan licks his wounds by going out and partying instead of finding comfort in his boyfriend Chris' arms. Is this the beginning of the end for the couple, or does Aidan just need time to regroup?

Priya and Paul have been carrying on a secret affair for a few weeks now, but the cat is about to jump out of the bag. Unfortunately for Priya, her daughter Rani spots the two in a close moment and confronts her mother. Priya of course denies it, but her ensuing behavior keeps Rani suspicious.

Find out who returns to Salem as a priest on "Days of our Lives" in Soaps.com's Soaps Spoiler Digest. Are you keeping up with Emily's plans for those who wronged her father? Read the latest Revenge recap.

Are You the One? Alum Says She Was Drugged, Sexually Assaulted During Season 5; MTV Pauses Production