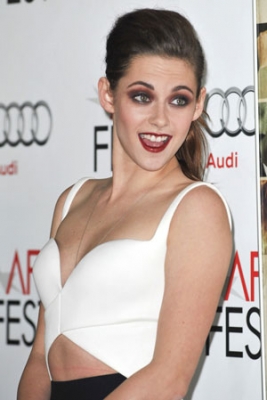 Sharon Osbourne’s double mastectomy.
This week “The Talk” co-host Sharon Osbourne revealed her decision to have a double mastectomy as a pre-emptive measure against breast cancer and to repair a faulty breast implant. The reality star, who has already battled colon cancer, reportedly told Britain’s Hello magazine that she made the choice to remove both breasts after discovering she had the breast cancer gene, which would have significantly raised her chances for developing the disease. Osbourne said that she didn’t want to live in fear, adding that she wanted to be around for her family and granddaughter, Pearl.

Stewart and Pattinson reunion in pictures?
No doubt, Friday’s upcoming “Twilight Saga: Breaking Dawn – Part 2” release is one reason for everyone hanging off the edge of their seats. The other, however, is our continued fascination with a Kristen Stewart-Robert Pattinson reunion. Since their reported reconciliation in September following Stewart’s cheating scandal back in July, the “Twilight” co-stars have been seen playing kissy-face at a Prince concert and supporting each other during press junkets for the film. And while they are loose-lipped about everything else, they seem to be keeping mum on their official relationship status. At a recent appearance on the “Today” show, Stewart was asked directly if she and Pattinson were back together. Simple yes or no, right? Not! Stewart reportedly responded with a vague let things unfold approach that suggested she was willing to allow people to interpret as they saw fit. Come on, we want a “Jerry Maguire” ‘you complete me’ moment!

Evan Rachel Wood and Jamie Bell robbed!
Last week, we reported on the relatively private nuptials of actress Evan Rachel Wood (“True Blood”) and her fiancé, actor Jamie Bell (“Billy Elliott”) in a small ceremony in California. Now for the happy honeymoon, right? Apparently not, as some honeymoon hijinks got in the way. The couple’s newly wedded bliss was interrupted after it was discovered that someone had ransacked their room and robbed them on Sunday night. An alarmed but composed Wood later tweeted:

Dude!! @1jamiebell and i just got robbed!! Found our room ransacked. We are safe and have everything we need. So all is well. #damn

Lying Lindsey looking at lockup?
Lindsey Lohan will likely be wearing steel bracelets before the end of the week as a new set of misdemeanor charges looms. The troubled actress is now firmly ensnared in a web of fibs, as she faces possible jail time for violating her probation after lying to police about being behind the wheel of her Porsche when it collided into the back of an 18-wheeler in June. In a hospital interview with the cops, Lohan claimed she wasn’t driving when, in fact, numerous witnesses saw otherwise. At the time of the accident, Lohan was already on probation for jewellery theft.

Justin Bieber’s buff bod.
Pop star Justin Bieber is taking his third place June finish as Billboard magazine’s Sexiest Man pretty seriously. While girlfriend Selena Gomez is lauded in the December issue as one of Glamour magazine’s Women of the Year, the singer recently posted his burgeoning muscular physique on Instagram. At 18 years old, the normally lanky singer shows some serious muscle definition, a peek-a-boo six pack, and some promising cuts in his chest. Perhaps Bieber was trying to keep up with the tightly toned figures of the Victoria Secret Angels he was serenading on the runway during Wednesday’s taping of the annual lingerie fashion show. The “2012 Victoria’s Secret Fashion Show” will air on December 2 at 10:00 PM on CBS.

Jermaine Jacksun?
One has to wonder if this is one of those 4 o’clock in the morning brilliant ideas. Following in the footsteps of name-dropping artists like Prince and Snoop Dogg, Jermaine Jackson has reportedly filed papers to legally change the spelling of his last name from Jackson to Jacksun for “artistic reasons,” according to TMZ. The 57-year old brother of the late Michael Jackson is currently performing in Europe on the Jackson Unity Tour with brothers Tito, Jackie and Marlon. If a judge grants his name change request, it is reported that Jackson would have to publicly announce the new autograph multiple times in print. It is uncertain whether the rest of the family will follow suit.

A Brad Pitt sectional?
Call it Project Furnishings. Oscar-nominated actor, philanthropist and newly-engaged father of 6, Brad Pitt is set to debut his furniture collaboration with veteran New Jersey-based designer Frank Pollaro on November 13 to November 15 in New York. The pieces include, among others, a bed, armchairs and a remarkable apple-shaped marble tub for two. According to Architectural Digest magazine, it was during a furniture delivery at the actor's home that Pitt's impressive furniture doodles on a sketchbook warranted a sneak peek from Pollaro who offered to team up with the actor on an exclusive line of custom designed furniture. View the complete Pitt-Pollaro collection when it becomes available online at Pitt-Pollaro.com starting November 11.

Blake Lively premieres new Gucci fragrance.
Blake Lively looks sensational and glamorous in a new perfume advert for Gucci that features the star in dual mythological universes. The "Gossip Girl" actress is seen wearing a shimmering gold backless gown looking over the illuminated nighttime landscape of the city of Los Angeles, followed by a mesmerizing stroll through the desert in a billowy blue dress. The commercial's opulent feel was intended by director Nicolas Winding Refn ("Drive") who garnered his inspiration from old Hollywood. See Lively's dazzling look for Gucci Premiere.

Brooke Shields' mother passes away.
Actress and model Brooke Shields' mother, Teri Shields died in Manhattan recently after a reportedly long illness that included dementia. Both mother and daughter shared a very close relationship that saw Shields act as the actress's manager throughout her career. Shields was 79 years old.

What's between Katy and Rihanna?
Allegedly, it's singer Chris Brown. Rihanna's public displays of affections with her ex (September's "MTV Music Video Awards"), coupled with rumours that the two have reunited despite Brown's notorious assault on her in 2009, have reportedly placed a strain on her friendship with pop star Katy Perry. According to the New York Daily News, sources have suggested that Perry feels Rihanna is making a colossal lapse in judgement in rekindling her friendship and possible romance with Brown. Despite the two singers reportedly not seeing eye-to-eye, Perry is reportedly concerned about Rihanna but wants to distance herself from the drama that's sure to come.

Jennifer Lopez vs. the maid.
Jennifer Lopez took to Twitter recently to refute accusations that appeared in the German tabloid, Bild that she flexed her star power to get a hotel maid fired for daring to ask for her autograph. Lopez is currently on her "Love" tour in Germany and was staying at the luxury hotel Melia Duesseldorf. Pray Dodaj alleges she approached Lopez for her autograph and was promptly shown the door, only to be sacked the next day due to the performer's supposed complaint. While the hotel director acknowledged the maid acted inappropriately, apparently no one was fired. Sources say the maid reportedly has two job offers lined up already.

C'mon thought you knew me better than this.. Would never get anyone fired over an autograph. 1st I heard of this was on twitter. #hurtful.

Worthington charges dismissed.
Actor Sam Worthington ("Avatar") is off the hook after the bouncer he allegedly shoved while trying to enter the Vortex Bar and Grill restaurant failed to show up at court on Monday. The actor was sprayed with pepper spray and was later arrested and charged with disorderly conduct on Saturday when he reportedly showed up at the bar intoxicated and lacking the necessary identification to get in. The bouncer also claimed Worthington, who is currently filming the movie "Ten" in Atlanta with Arnold Schwarzenegger, said he was a DEA agent in an attempt to gain entry. Perhaps Worthington took his role in the film a little too seriously?

Scarlett's ink.
While in Paris, France last week, actress Scarlett Johansson decided to add to her collection of delicately placed body art by commissioning a tattoo from a French tattoo and graffiti artist. Apparently, Johansson loved his artwork so much that she asked him to fashion a design for her which she promptly displayed on her rib cage. The special inking is of a good luck horseshoe, surrounded by stars, with the phrase 'Lucky You' inscribed atop and below.

Fans of "Burn Notice" are in for a surprise. Read all about it and catch up on all your favorite Primetime shows in this week's Primetime Dish. Also, "Revenge" is heating up! For a sneak peek into Victoria's latest warning check out this week's Revenge weekly spoiler video.