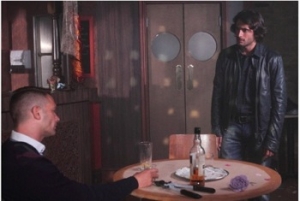 Several soaps are welcoming key players back, while others are bidding adieu. In between, there are pregnancies, affairs and surprise children popping up. It’s par for the course for UK and Aussie soaps.

Coronation Street:
Spoiler alert: Tina and Tommy’s relationship has struggled since she agreed to be a surrogate for Gary and Izzy in exchange for money that would help get them out of debt. Despite Tommy’s severe reservations about his girlfriend giving birth to someone else’s baby, Tina went ahead with the procedure. Things get even worse when she learns she is pregnant.

Fiz has been there for Tyrone as he deals with his abusive fiancée. She’s been urging him to leave Kirsty, but he’s sticking around so he can remain close to his baby. However, things will heat up between the former flames turned friends. Considering Kirsty’s temper, they better watch their backs should she find out about their affair.

EastEnders:
Spoiler alert: Cheating and lies have plagued Christian and Syed’s relationship. Christian’s ready to leave it all behind him as he plans to move to the U.S. As Syed dreads his only option, moving in with his parents, his mother Zainab takes matters into her own hands. She locks them in the family restaurant together until they work things out. With the characters leaving the canvas soon, is it too much to ask that her meddling will work?

All is not what it seems with Cora, as she makes a whopper of a confession to Patrick. It seems her daughter Ava didn’t die as a baby, as Cora has led everyone to believe. Cora reveals the baby is actually alive and that she gave her up for adoption. Her other daughter Tanya is worried about her mother’s recent depressed state, leading Patrick to spill the beans.

Emmerdale:
Spoiler alert: After all the battling they’ve been doing, Megan plans to teach her half-brother a lesson for conning her when he comes home from his honeymoon. Unfortunately for her, Declan gets the upper hand and forces his sis to go to London with her son Robbie. Has Declan finally won the war or will Megan return for vengeance.

Chas must own up to her actions when Debbie visits the other woman in jail. Chas admits she truly loves Cameron and Debbie realizes her man genuinely loves her back. She still loves Cameron herself though, so what will she do?

Hollyoaks:
Spoiler alert: Ruby and Jono are getting married, but good friend Maddie might ruin everything. Feeling down over Callum, Maddie cries on Jono's shoulder and goes in for a kiss. Not exactly how a friend of the bride should act, but things get worse when Maddie discovers Esther observed the whole thing. Will Esther go running to Ruby?

John Paul is on his way back to the village under very secretive circumstances. The character left after his half brother killed his half sister in an explosion. It seems he's ready to return and it will reportedly be in a way that has never been done on a soap. Considering all the crazy plot devices soaps use on a regular basis, what brand new scenario could they possibly come up with?

Home and Away:
Spoiler alert: Two of the Australian soap's men are said to have taped their final scenes. It looks like Axle Whitehead (Liam) and Luke Mitchell (Romeo) will last air as their alter egos sometime in early 2013.

Casey finally goes to trial for killing his father during a robbery gone wrong. He might be his own worst enemy in court when he can't come up with a reasonable explanation as to why he fatally shot Danny. His subsequent panic attack doesn’t exactly help matters.

Neighbours:
Spoiler alert: A new family will be moving to Ramsay Street in 2013. Look for Lou Carpenter's daughter Lauren to return to her childhood home with her teenage kids Mason, Amber and Bailey, as well as her police sergeant husband Matt Turner. Like any good soap family, the Turners are supposedly keeping more than one secret.

After a stint in jail for recklessly driving her motorcycle in 2010, Steph is making her way back to Ramsay Street in 2013. Once out of the clink, she'll set her sights on Paul, who contributed to her downward spiral, ex love Lucas.

Keep up with American soaps by learning which major stars are leaving their longtime roles in Soaps.com's Soap Opera Comings and Goings. Read about Eric Brady's return in Soap Opera Fan's Days of our Lives spoilers.