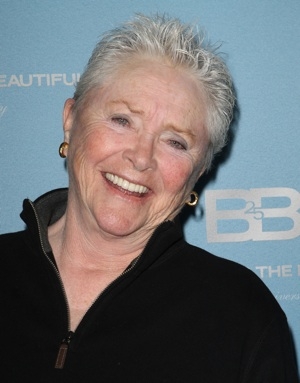 “B&B,” “DOOL” and “GH” are saying goodbye to longtime characters, while “Y&R” is welcoming a few familiar faces from another soap. Get all the details on Daytime’s always busy revolving door.

The Bold and the Beautiful:
The month of October brought back Jen Hensley as Dr. Meade and Elizabeth Scott as a Forrester model, but best of all, it confirmed that Katherine Kelly-Lang has re-signed to play Brooke Logan for two more years. Find out who else re-upped with the show in The Bold and the Beautiful Comings and Goings. Sadly, October also gave fans the news that Susan Flannery’s last airdate as Stephanie Forrester would be December 3. That means lots of on air goodbyes, leading to Lesli Kay reprising her role as Felicia Forrester and Tracy Lindsay Melchior coming back as Kristen Forrester in November.

Days of our Lives:
The revolving door will see William Christopher, Father Mulcahy from “M*A*S*H,” begin playing Father Tobias, while Nathan Owens will appear as Cameron Davis. The latter means Schuyler Yancey is out. Greg Vaughan will finally begin playing Eric Brady this month, while Eileen Davidson returned to unleash her crazy on Salem in October. There were also sad goodbyes for the original bad boy/hero Bo Brady, as Peter Reckell left the show. However, there is a bright spot as another fan favorite is returning in January. Find out who in the Days of our Lives Comings and Goings.

General Hospital:
Joe Jr.'s reign of terror ended in October, while Carolyn Hennesy made a welcomed return as legal eagle Diane Miller. Other notable casting news included Ian Buchanan resurrecting Duke Lavery and Sean Kanan coming back from the dead as A.J. Quartermaine. But perhaps the biggest news was that Steve Burton played Jason Morgan for the last time, as Stone Cold is now the one presumed dead. All is not lost though, as many more returns are on the horizon. They include Constance Towers as Helena, Tristan Rogers as Robert Scorpio and one more biggie. Find out who is on their way back to Port Charles in the General Hospital Comings and Goings.

The Young and the Restless:
The new writing regime of Jill Farren Phelps and Josh Griffith officially took over with their episodes beginning in October. Some changes that are occurring under their leadership include the returns of Jess Walton as Jill and Catherine Bach as Anita. Meanwhile, Debbi Morgan has been let go as Harmony, while Darnell Williams is staying put as Sarge, but in a recurring capacity. Other notable casting decisions include former "General Hospital" star Genie Francis leaving the role of Genevieve, but two more "GH" alum joining the cast. Read about which former Port Charles citizens are making their way to Genoa City in The Young and the Restless Comings and Goings.

Take a look at who is coming to "The Big Bang Theory" in Soaps.com's Primetime TV Listings and find out who got the upper hand at Victoria and Conrad's wedding in Soap Opera Fan's Revenge recap.