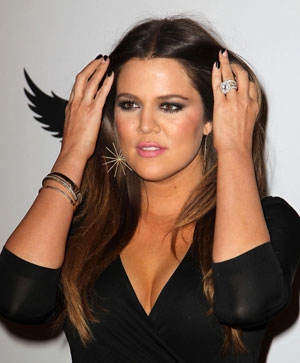 Jessica Simpson’s lost a few, Taylor Swift strikes again and the stars come out for Hurricane Sandy and Halloween in this week’s Celebrity Gossip.

Jessica Simpson goes from expectant mummy to hot lass!
Despite her parents’ impending divorce and the rumors surrounding her father’s sexual orientation, Jessica Simpson managed to pull off a happy Halloween with fiancé Eric Johnson and their baby daughter Maxwell dressed as a rooster. The singer/fashion designer and Weight Watchers spokesperson Jessica Simpson tweeted this sexy shot as one half of a Highland couple, complete with thigh-high boots and a leather corset that showed off her trim waistline, and ample cleavage. Simpson has reportedly lost 60 of the 70 pounds she gained during her pregnancy since giving birth in May.

Khloe Kardashian’s X-Factor exposure.
Khloe Kardashian’s live debut as co-presenter of the reality singing competition, the “X-Factor” with Mario Lopez (“B&B’s” ex-Dr. Ramirez) created quite a stir when camera close-ups of the reality star revealed her nipple standing at attention. While the “Keeping Up with the Kardashians” star looked lovely in a polished black pencil skirt that was cinched at the waist, it was her sheer, long-sleeved blouse with sequin-detailing and plunging neckline that clearly exposed what appeared to be a bra-less, pastie-less, totally unaware Khloe. Husband and NBA star Lamar Odom missed the ‘show’ as he was playing with his team, the Los Angeles Clippers who kicked off the basketball season against the Memphis Grizzlies.

Smack ’em Hackman.
Academy Award-winner Gene Hackman came to the defense of his wife Betsy Arakawa when a homeless man reportedly approached them and insulted her with the ‘C’ word. The couple was just leaving a Santa Fe, New Mexico restaurant when the man allegedly threatened the actor and his wife, forcing Hackman to retaliate by slapping him across the face. No charges were filed after the police later ruled that Hackman acted in self-defence.

Kelsey Grammer’s Playboy Nursery?
Eager to get into the spirit of the Halloween season, actor Kelsey Grammer and his wife Kayte Walsh toted their three-month old baby girl to a Halloween party dressed as a vampire and a witch – hardly outrageous. However, if the party is at the Playboy Mansion and your wife is seen posing in a blond wig without her witch hat and looking suspiciously like your ex-wife Camille, then the situation can quickly turn scandalous. According to TMZ, baby Faith was reportedly spotted swaddled up and fast asleep in her car seat, positioned next to an unidentified woman, while Grammer and Walsh were enjoying the party. In an apparent statement, Grammer defended their decision, saying that without a babysitter, Faith needed to be near her breastfeeding mother hence the reason she was at the mansion.

Lohan underestimates Sandy’s power.
After her flippant tweet earlier this week about the evacuation warnings surrounding Hurricane Sandy, Lindsay Lohan is probably eating her words. The actress’s mom Dina joined panicked neighbors whose view of the destruction in their Long Island community once the tropical storm had passed, revealed sailboats swept onto lawns and sitting alongside parked cars. Lohan also reported to TMZ that an uprooted tree had fallen, damaging the roof before coming to rest on the family pool. And as if that weren’t enough, two of the Lohan siblings were stranded in New York due to bridge and tunnel closures.

WHY is everyone in SUCH a panic about hurricane (i’m calling it Sally)..? Stop projecting negativity! Think positive and pray for peace.

Actor George Wendt hospitalized.
The actor best known for his role as Norm Peterson on the comedy sitcom “Cheers,” has been hospitalized. Wendt was set to play Oscar Madison in the Chicago stage production of “The Odd Couple” next week, but had to drop out due to serious chest pains. Wendt is 64 years old.

Cee Lo accused.
The Los Angeles Police Department (LAPD) is currently investigating sexual battery claims against singer Cee Lo Green (aka Thomas DeCarlo Calloway). The investigation is still new, and details as to where and when the incident happened are still unknown – while the woman who made the allegations remains unidentified. "The Voice" judge continues to deny that anything wrong ever took place.

Hurricane floods Donnie Wahlberg's home.
Actor Donnie Wahlberg ("Blue Bloods") took video footage of the flooding and damage to his home by Hurricane Sandy on Monday. The former New Kids on the Block singer blogged about his distressing discoveries as he waded through the lobby of his building as he surveyed the havoc left by the hurricane. Like many Americans, the 43-year-old Wahlberg remains without power.

Evan Rachel Wood Bell.
Actress Evan Rachel Wood ("True Blood") married her fiancé Jamie Bell ("Billy Elliot") in a small ceremony surrounded by close friends and family early on Tuesday. This is the first marriage for Wood who called off her wedding to singer Marilyn Manson in 2010. Wood and Bell first met on the set of Green Day's "Wake Me Up When September Ends" music video in 2005, and started dating a year later. Wood reportedly wore a custom mermaid gown by Carolina Herrera accented with capped sleeves, Chantilly lace and striped ribbon at the waist.

Is Mila Kunis Pregnant?
Rumors are swirling that actress Mila Kunis is expecting a little Ashton Kutcher. Not so fast and not so true they say! According to Kunis, while a baby may be in her future, she isn't ready for a family just yet. The "Ted" actress was spotted with Kutcher ("Two and A Half Men") wearing a stripped tank top that appeared to drape somewhat fittingly over her belly, as they stepped out for a coffee. There must be a wardrobe memo that outlines these suggestive clothing issues, right? Check out the latest rumors on "Days of Our Lives" and find out what Salemites are up to in The DOOL Rumor Mill.

Hair-raising Halloween for Kimye.
Two thousand dollars! That's what the cost reportedly was for the blonde strands that went into Kim Kardashian's Halloween wig. The "Keeping up with the Kardashians" reality star was seen last week sporting the expensive headpiece as part of a mermaid costume to match her sailor-dressed beau Kanye West, who wore ankle-baring red loafers. Of course, the eye-catcher wasn't West, but Kardashian whose cleavage threatened to spill out of a skin-tight green mermaid skirt. The two were reportedly canoodling at the 2nd Annual Midori Green Halloween at Avenue in New York City.

LeAnn Rimes takes on the Sandys.
Last week, we reported that country crooner LeAnn Rimes was on a soul-healing tour that began with an interview with Katie Couric to talk about her 30-day stint in rehab for stress and anxiety. This week, the singer taunted Hurricane Sandy as she laid out her sultry Halloween get-up. With her hair expertly coiffed and her red lipstick applied in a perfect pout, Rimes dressed up as sexy Sandy Olsen from the lively musical "Grease." Check out the photo of Rimes and husband Eddie Cibrian ("Y&R's" ex-Matt Clark):

Highs and lows for Taylor Swift.
It's a mixed bag of emotions for Taylor Swift. The Grammy Award-winning singer is way on top professionally since her latest release "Red" has become the highest selling album since 2002 – 1.2 million copies to be exact. However, her personal life has taken a bit of a dive. It is reported that Swift recently ended her summer romance with Conor Kennedy. The abruptness of this latest break-up was allegedly due to her hectic album promoting schedule and apparently was amicable. So, what can the next Mr. Right Now expect? He'll have to figure out the singer's tolerance meter, where she explains her relationship must-haves and have nots in the December issue of Cosmopolitan magazine.

Gossip Girl promises to end with special two-hour seat-gripping finale, but first check out the teasers and catch up on all your favorite Primetime shows in this week's Primetime Dish.