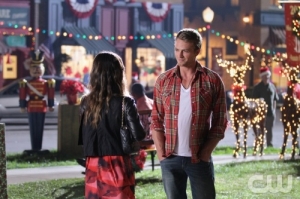 If time passes you by and you fall behind on all of the upcoming happenings in Primetime, Soaps.com has the weekly scoop for you. Here are just a few of the things to look forward to during the week of January 23, a few casting scoops, and new season premiere info…

90210: Can’t get enough of AnnaLynne McCord (Naomi Clark)? If you’re in or around Park City, Utah and attending the Sundance Film Festival, which runs through January 29, keep your eye out for the actress. AnnaLynne will be in attendance for the screening of her new film “Excision.” Tuesday Episode Teaser: Naomi’s inference forces two people to work together. Arielle Kebbel (The Vampire Diaries ex-Lexi) will guest star.

Alcatraz: FOX’s new supernatural hit delivered high ratings during last week’s premiere. If you’d like to check it out the show airs on Saturdays at 11.00 PM and follows a trio that investigates the puzzling reappearance of 302 of Alcatraz’s most infamous prisoners and guards – 50 years after they vanished.

American Horror Story: FX has announced that they are considering a second season this fall with plans to bring Jessica Lange (Constance) back into the mix. Co-Creator Ryan Murphy teases a new locale and mostly new cast, with Dylan McDermott (Ben) and Connie Britton (Vivien) not expected to return.

Cougar Town: The show will kick off its third season on ABC at 8.30 PM on Tuesday February 14. We can only imagine what kind of Valentine’s Day trouble Jules Cobb (Courteney Cox) will find herself in.

CSI: New York: The crime level is at an all-time high in New York City. Fans of “Days of our Lives” and “One Life To Live” will soon see some familiar faces on the streets as Molly Burnett (Salem’s Melanie) and Sherri Saum (Llanview’s ex-Keri) have been cast to appear in an upcoming episode this season. Molly tweeted, “Tackling “CSI: New York” today [January 17]! So excited!”

Gossip Girl: Fans of Chuck’s Uncle Jack are in for a treat. Word has it Desmond Harrington will be returning to the role later this season and might even help his onscreen nephew uncover a secret or two. Monday Episode Teasers: Blair has no idea that her bachelorette party will be a night she’ll never forget, Nate gains an unlikely ally, and Serena and Dan go the extra mile to protect someone.

Hart Of Dixie: If you’re a country western fan then you’re familiar with America’s Sweetheart Taylor Swift. Even if you’re not, her song “Sparks Fly” that was used in the new mid-season return promo for this week’s episode had fans wanting more. Monday Episode Teasers: Look for Zoe or Wade to make a confession that’ll have sparks flying everywhere. Nadine Velazquez (“Charlie’s Angels”) guest stars to add a bit of drama to Wade’s life.

Hot In Cleveland: Fans, you asked for it… TV Land has decided to renew the series for a fourth season!

One Tree Hill: This is the last season, folks - not one to miss. Wednesday Episode Teasers: Dan helps Haley, Quinn finds out Clay is hiding something, and Chase tries to mend a broken heart.

Parks and Recreation: Sean Hayes ("Hot In Cleveland," "30 Rock," "Will & Grace") has been locked in to play a guest-starring role on the NBC comedy as a TV journalist. His episode will air sometime this spring. "P&R" airs Thursdays at 8:30 PM.

Pretty Little Liars: Are you still wondering who 'A' is? The troublemaker’s identity will be revealed during the show's finale on March 19. If you've read the books, don't worry, it won't be the same person! Monday Episode Teasers: The girls uncover a huge secret and the people they love the most could pay the highest price.

The Covenant: Chace Crawford, Sebastian Stan, Steven Strait and Taylor Kitsch star in this CW special two hour movie, which airs at 8.00 PM Thursday January 26. The plot surrounds four guys who belong to a supernatural legacy and are forced to battle a fifth power.

The Killing: Season Two will return on AMC on Sunday April 1 at 8.00 PM. Look for a special two-hour episode.

The Lying Game: Twilight star Gil Birmingham (Billy) has been cast as Ben Whitehorse who will appear in the February episodes "Reservation for Two" (February 6) and "No Country For Young Love" (February 13).

The Secret Circle: Things are about to get darker in Chance Harbor or could it be Cassie's circle will be safer? Soap Opera alum Joe Lando ("One Life To Live's" ex-Jake) has been slated to play her father, John Blackwell, in the upcoming episode "Return." Stay tuned for his air-date.

The Walking Dead: The series resumes on AMC for Season Two on Sunday February 12. If you missed any of Season One's episodes look for a marathon to start on Saturday February 11 at 8.00 PM.

True Blood: Waiting to see who will be turning up for Season Five? So far we know "Law & Order: SVU's" Christopher Meloni will play an ancient vampire who holds Bill and Eric's fate in his powerful hands. The new season will return to HBO this summer.

Work It: In case you're anticipating what'll happen next on this ABC series, sorry to be the bearer of bad news but the network canceled it after only two episodes, which received overwhelmingly bad reviews and ratings.