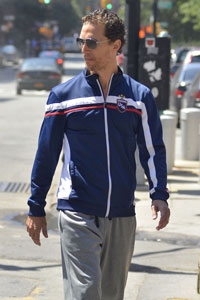 Logan hugfest follows catfight.
After telling her father that her mom was “dead to her,” following allegations of cocaine use and a default on a $40,000 loan to her mother Dina, Lindsey Lohan was spotted very much alive and seemingly hugging it out with her mom in front of her Long Island, NY home – the morning after they reportedly partied up in a New York City nightclub and later duked it out in the back of a limo, forcing Lindsey to tattle to her father who eventually called police. Hear the recording of an emotional Lindsay Lohan ranting to her father.

Kim and Kelly to ask: Will you marry me?
The ladies are making their intentions known that they’ll soon make honest men out of their respective partners. Kim Kardashian has claimed that her romance with rapper Kanye West might just have her skipping down the aisle sometime soon. Now singer Kelly Clarkson has followed suit, gushing to Ryan Seacrest that her boyfriend Brandon Blackstock is totally husband material. With a newly acquired handle on love, both Kelly and Kim have reportedly developed some love handles too. Yup! Happiness comes in all shapes and sizes.

Swayze’s wife in love again?
Actor Patrick Swayze’s widow Lisa Niemi has reportedly been dating again. The 56-year old dancer, who appeared emotional on the “Oprah Winfrey Show” shortly after Swayze died of pancreatic cancer three years ago, was seen smiling as she walked side by side with her boyfriend, 57-year old jeweler Albert DePrisco on a recent outing.

All the man that Bobbi Kristina needs.
The rumor mill is churning out that Whitney Houston’s daughter Bobbi Kristina has confirmed her engagement to boyfriend and adopted brother Nick Gordon. The announcement came during the filming of a new series for A&E Network called “The Houstons: On Our Own.” Sources say the relationship is not so popular with family members, however, viewers can see how they deal with the 19-year old’s decision as it unfolds once the show debuts on October 24.

Ben and Jen still in touch.
Well, if you were wondering, wonder no more. The once notorious couple Ben Affleck and Jennifer Lopez, dubbed Benifer by the media, still maintain contact and ‘follow’ each other’s activities, even deigning to comment on their respective career decisions. Affleck who is currently promoting his film “Argo,” purportedly told The Hollywood Reporter that he does keep in touch by email… and that Jennifer isn’t the only ex, he still talks to.

Will Smith’s past resurfaces.
Actor Will Smith may be ducking from an old mug shot from 1989 that has suddenly reappeared. New details are emerging about how the Oscar-nominated actor was involved in a violent confrontation with a record promoter in Philadelphia, shortly after winning his first Grammy Award. Sources say Smith sicced his bodyguard on the guy who suffered serious eye injuries. Despite being arrested and jailed, the charges were later dropped. Smith has maintained his innocence in the attack.

Monica Lewinsky tell-all not so?
Tales of a tell-all book in the works by Monica Lewinsky about her affair with former U.S. President Bill Clinton are reportedly greatly exaggerated. It would seem that the former White House intern is keen on moving past the scandalous dalliance that had Clinton impeached and sent Lewinsky into hiding 14 years ago … until she recently resurfaced earlier this week in New York. It has been speculated that Lewinsky, who is nearing 40, remains unmarried, has put on weight and lives with her mother in New York, would have stood to earn nearly $12 million in recounting the intimate details of her relationship with the former president, which allege his desires for a threesome and the love letters she wrote.

Sexiest woman alive is …
Mila Kunis! It’s official; Ashton Kutcher’s is now the boyfriend of "Esquire" magazine’s Sexiest Woman Alive. Last week, you may remember that the two actors kept reports of a relationship between them so low key that they all had us wondering. Read how cameras caught Mila and Ashton holding hands. The magazine cover shows Kunis looking au natural, sporting a come-hither gaze and clad only in leather pants. Perhaps, Kutcher will up the PDA now to mark his territory – just in case anyone has any ideas.

Splitsville after 30 years.
As if the announcement that comedic couple Rhea Perlman and Danny DeVito were separating wasn’t shocking enough; new reports are emerging that DeVito’s wandering eye may have been the catalyst for the breakup. It’s been speculated that the pair, who share three children, have been muddying through troubled waters for the last 10 years and that the decision to end their 30-year marriage was a long time in coming.

Clooney’s compassion.
Oscar-winning actor George Clooney is a recognized human rights activist, so it should come as no surprise that the actor stopped to lend a helping hand to a homeless person while on his way to dinner with his girlfriend Stacy Keibler and some friends in New York City. Clooney, apparently saw a homeless man dressed in military garb outside the restaurant and started a conversation. He also gave the man some money. Keibler is reported to have stood by her man, smiling as she admired her BF’s character and kindness.

Risky movie makeovers.
Actor Christian Bale did it for his movie "The Machinist. " So did actress Charlize Theron for her Oscar-winning role in "Monster." Now it’s Matthew McConaughey’s turn to embrace the extremes for a movie role. The actor is reportedly sporting sunken cheeks and an emaciated physique for his role as an AIDS activist in the movie "Dallas Buyer’s Club." His supposed 30-pound weight loss is so extreme that sources say his fans are concerned, after a photo surfaced of him in Texas clutching his mother after leaving a church service.

Mariah Carey’s newest bodyguard?
Stevie Nicks has joined the tangled twosome in the on-going feud between Nikki Minaj and Mariah Carey. Earlier this week, the Fleetwood Mac singer-songwriter lashed out at Minaj for her vitriolic tirade against her fellow "American Idol" judge, alluding that she would have strangled Minaj for confronting her the way she did Carey. Nicks has since apologized for her uncharacteristic remarks about Minaj, citing an exhaustive day of interviews when the comments were made and noting that she should have been more respectful in spite of feeling protective of Carey.

Robert Pattinson playing the field?
Are they or aren’t they back together? While the world may be rooting for a KStew-RPat reunion, rumors are swirling that Robert Pattinson is happily moseying along and rebounding away from his former girlfriend, Kristen Stewart since her cheating scandal broke a few months ago. The image is grainy, yet a photo has reportedly surfaced showing Pattinson sitting cozy and comfortable next to an unidentified female companion at the Electric Room Bar in New York City.

Excited about the "Beauty and the Beast" reboot? Follow Vincent and catch up on all your Primetime shows in this week's Primetime Dish.

To find out what Eric Dane (ex-Dr. Mark 'McSteamy' Sloane) is up to post-"Grey's Anatomy," check out this week's Star Gazing.