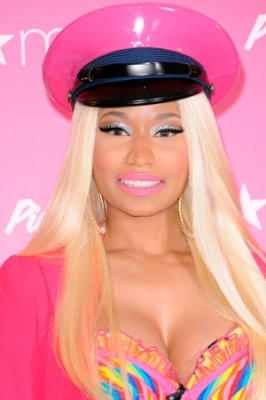 Over $127,000 worth of jewelry stolen from actress’ home.
Ex-“As The World Turns” star Julianne Moore has detectives investigating into the theft of several expensive pieces that were pinched from “The Kids Are Alright” actress’ home in Manhattan’s West Village. So far, no arrests have been made.

Minaj vs Carey.
There’s a bitch-fest going on at “American Idol” behind the scenes between divas Mariah Carey and Nicki Minaj. Minaj is saying Carey has called the rapper a “bitch” a number of times and then Carey stated in an interview with Barbara Walters that many people heard Minaj backstage at “AI” say, “If I had a gun I would shoot the bitch.” Is this the usual drama in order to keep people watching a television show or is this the real deal? We’re not sure but Carey has stepped up security to be on the safe side.

I guess it hurts 2 have the producers tell u to ur face that nicki is the best judge we’ve had since simon. Awww, poor u. Keep them lies cmn

R&B star Chris Brown newly single.
Chris Brown broke things off with girlfriend Karrueche Tran in order to keep up his friendship with his ex-girlfriend Rihanna. Many are speculating that this came on the heels of Rihanna giving Chris Brown a peck on the cheek at the MTV Video Music Awards in September and folks are wondering how long it’ll be before Chris Brown and Rihanna get back together. It has been three years since the physical beat-down and then ultimate break-up. Update! Chris Brown talks about loving two women in this video.

Former GH star engaged!
A Disneyland outing became one an ex-“General Hospital” star will never forget after her beau popped the question! Take a look at the photo of Lindze Letherman getting engaged.

Anne Hathaway married.
Actress Anne Hathaway wed Adam Schulman in Big Sur September 30 with a nature-inspired ceremony and reception. The couple invited more than 150 friends and family members to help celebrate. The bride wore a 1930s inspired vintage headpiece and a tulle off the shoulder dress by Valentino. Congratulations to the newlyweds.

Drew Barrymore a momma.
Drew Barrymore and husband Will Kopelman welcomed a baby girl named Olive Barrymore Kopelman September 26. The couple is keeping to themselves during this special time and both mother and baby are said to be healthy. Congrats!

Bieber physically ill on stage in Arizona.
Surprised fans got a cringe-worthy view of singer Justin Bieber on stage in Glendale, Arizona upchucking during a dance sequence. The singer continued on and tweeted a message about the reason behind the sickness on Twitter.

//platform.twitter.com/widgets.js
For those without sensitive stomachs, watch the talked about scene in Justin Bieber’s concert.

McFlarlane hosts Oscars.
Seth Farlane, "Family Guy" and "Ted" creator, will be hosting the 85th Oscars in 2013 according to a statement from Telecast producers, Craig Zadan and Neil Meron which reads: "We are thrilled to have Seth MacFarlane host the Oscars. His performing skills blend perfectly with our ideas for making the show entertaining and fresh. He will be the consummate host, and we are so happy to be working with him."

Lilo’s drama continues.
No, she didn’t hit anyone with her car, or wind up in the hospital, or lash out at Dr. Phil for being a "fraud" on Twitter again but she did tell the New York City police she was attacked after bringing some guy to her hotel room after meeting him at a Chlesea nightclub this past weekend. Police officers told WNBC that the "Liz & Dick" star had an argument with Christian LaBella over photos he was taking of her with his cell phone that she preferred he deleted. Apparently, she confronted him, confiscated his phone and LaBella allegedly responded by throwing her on the bed, leaving scratches on her hands. She left the room and later returned and alleged that he choked her. She had the man arrested, but the charges didn't stick.

Grammer talks ban on Piers Morgan.
As we reported last week, Kelsey Grammer was banned from doing the Piers Morgan show after Grammer walked off the set. TMZ caught up with Grammer who basically says he couldn’t care less about the ban or Morgan but won’t hold a grudge. According to the actor, he walked off the set after the network aired a photo of his ex-wife, Camille Grammer in the opening scenes which was not what he was promised. Watch a video of Grammer calling Morgan’s ban 'irrelevant'.

The truth comes out!
Mila Kunis and Ashton Kutcher may have adamantly maintained that they were 'just friends' in order to keep the paparazzi away from their private life but in the last few weeks they've been spotted kissing in Central Park, snuggling close in the West Village in New York and holding hands!

Check out the newest Primetime Dish for television spoilers, news and find out which dates to set your DVR, because Halloween comes twice this month on FOX!

Read an interview with Gloria Loring about her new book, Coincidence Is God’s Way Of Remaining Anonymous.

Photo credit: Drew Barrymore and Will Kopelman by WENN.com