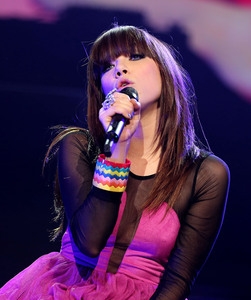 There is a lot set to take place in Primetime television during the week of October 8, as well as a few scoops for before and after. This week’s Primetime Dish column highlights episode teasers, casting scoops, big season return dates, a contest that could land your original work on a popular series, and Halloween comes twice this month on FOX…

666 Park Avenue:
“The View” co-host Whoopi Goldberg has landed a December guest spot on the ABC series. Much like her “Ghost” role, Goldberg’s character, Maris Elder, will help someone connect with the supernatural.

90210:
Season premiere! In the CW’s October 8 8:00 PM episode titled “Til Death Do Us Part” Max and Naomi find themselves in jail. Liam finds a way to pay off Vanessa. Silver has a request for Teddy, and Adrianna has no idea about Dixon’s accident. Also, look for Carly Rae Jepsen (“Call Me Maybe”) to guest star.

American Horror Story: Asylum:
Mark Margolis (“Breaking Bad”) has been cast in the recurring role of Sam Goodwin. As of yet, details are being kept under wraps.

Beauty And The Beast:
In the CW’s Thursday October 11 9:00 PM series premiere a homicide detective and a man with great strength team up and realize that this isn’t the first time they’ve met.

Boardwalk Empire:
Renewed! The HBO series has been green-lighted for a fourth season. For now, in the Sunday October 14 episode titled “You’d Be Surprised” Gyp receives an unequivocal message from Rothstein. Billie gets a new co-star. Sigrid and Van receive an unexpected visitor. Gillian tries to keep her business afloat, and Margaret experiences a few awkward moments.

Dallas:
Warner Brothers will release a DVD in the US and Canada of TNT’s new “Dallas!” Get all of the details, including the DVD extras, through Dallas Season 1 DVD USA & Canada Release. Until season two, which premieres on January 28, 2013, did you miss any of season one’s episodes? Catch up through Soaps.com’s Dallas recaps.

Franklin & Bash:
Renewal! TNT has renewed its hit series for a third season.

Fringe:
Soaps.com sat in on a conference call with Executive Producer and Show Runner J.H. Wyman. When asked what’s ahead for the final season Wyman stated, “It’s sort of like more—there’s more of a continuity of emotion and story, but it’s not like you’re going to get Walter finishes a sentence and it’s dan-dan-dan and then you come back and the next week he’s sort of talking about the same thing. I mean there’s still sort of capsulated episode, but they’re all about one thing. So, those 13 stories are about one story.” Tune in Fridays at 9:00 PM on FOX.

Gossip Girl:
Season premiere! In the CW’s October 8 9:00 PM episode titled “Gone Maybe Gone” Blair and Chuck make each other a promise then part ways. Dan gets some assistance with his tell-all book. A battle reignites, and everyone searches for Serena.

Hart Of Dixie:
In the CW’s Tuesday October 9 episode titled “Always On My Mind” Zoe is forced to ask Wade for a favor. George plans to reenter the dating scene, and Lemon decides to keep her job. Get a further peek through the spoiler video below:

Kiss Live On Letterman Concert Webcast:
Kiss fans, tune in online on Wednesday October 10 at 8:00 PM as the legendary band performs live! The event will celebrate the 50th webcast of CBS Interactive’s award-winning live webcast concert series. Save the date and visit Live On Letterman to rock on with Kiss!

Liz & Dick:
Lifetime’s highly anticipated film based on the romance of Elizabeth Taylor and Richard Burton, starring Lindsay Lohan, will premiere on Sunday November 25 at 9:00 PM.

Major Crimes:
Renewal! TNT has green-lighted 2012’s number one new cable drama for a second season, which will air in the summer of 2013. For now, in Monday’s TNT October 8 episode titled “Cheaters Never Prosper” a Las Vegas man is found dead after an overdose… look for gritty details to unfold and reveal the true facts surrounding the incident. Tune in at 9:00 PM.

Raising Hope:
Soaps.com sat in on a conference call with the show's star Martha Plimpton (Virginia; Stef "Goonies"). When asked what's ahead for the new season Plimpton stated, "Well, gee, where do I begin? We are going to be branching out a little bit, meeting more of Sabrina’s family, and seeing a little bit more of the outside world. There is a risk that maw maw could be removed from the home, and we have to rescue her from a state-run nursing home. We sort of pull off a little 'Mission Impossible' thing there. What else? Just more of the same, hilarious hijinks." Tune in Tuesdays at 8:00 PM on FOX.

Revenge:
Michael Trucco ("How I Met Your Mother") has landed a recurring role as Nate - Kenny's brother. As of yet his first air date is unknown, but in case you ever miss an episode read our Revenge Weekly Recaps.

Rizzoli & Isles:
The TNT series returns for its winter premiere on Tuesday November 27 at 9:00 PM.

Strike Back:
Renewed! Cinemax will be bringing viewers season three in 2013 to include ten new episodes! Until then, in Friday's October 12 10:00 PM episode Scott appeals to Bryant for help but his dark past could change his course of action. Stonebridge is consumed by thoughts of revenge, and South African police and Section 20 search for the nukes and attempt to stop Knox.

Supernatural:
In Wednesday's October 10 9:00 PM CW episode titled "What's Up Tiger Mommy" Kevin's mother is rescued from demons by Dean and Sam, as they all set out on a quest to find the tablet.

The Good Wife:
Stockard Channing ("The West Wing," "Grease") has been cast to play Alicia Florrick's mother in at least one episode. The CBS series airs Sundays at 9:00 PM.

The Mentalist:
Henry Ian Cusick ("Scandal," "Lost") has been cast to appear in three episodes as Tommy Volker sometime in season five. Tune in to CBS on Sundays at 10:00 PM.

The Simpsons:
Contest! To celebrate the series' twenty-fourth season the people at FOX are challenging fans to send in their ideas for an original The Simpsons couch gag contest. Visit the link and enter yours today by November 15. Your idea could be shown on TV!

The Vampire Diaries:
The series returns Thursday October 11 at 8:00 PM! If you ever miss a CW episode read Soaps.com's Vampire Diaries Weekly Recaps each Thursday after the show airs.

Treme:
In HBO's Sunday October 14 10:00 PM episode titled "The Greatest Love" though Antoine does a good deed, someone suspects Nelson’s aren't so good. Davis doesn't sign 'Sugar Boy' Crawford for his opera. Delmond convinces his father to sign up for assistance, and L.P. learns something about his headless skeleton.

If it's strictly spoilers you're looking for view our Primetime Television Spoilers to find out about a secret affair on "Blue Bloods" then vote in our Soap opera polls on some of the recent Salem, Port Charles, Los Angeles and Genoa City Daytime storylines.