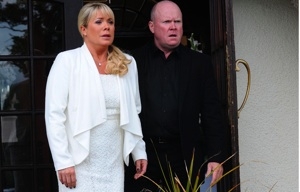 Health scares, surprise engagements and revenge. Just another day in the life of a British and Australian soap town.

Coronation Street:
Spoiler alert: Maria has a breast cancer scare and leans on Marcus when he goes to the doctor with her. She might need to lean on his shoulder longer, as she’s keeping her possible condition a secret and gets inconclusive test results.

If having an abusive partner isn’t bad enough, Ty could soon face charges in the upcoming months. It seems he tries to fix friend Fiz’s gas boiler, but doesn’t do such a good job as she passes out after inhaling carbon monoxide. The storyline will take place around Christmas time. The show is working with the Gas Safe Register to make sure their facts are accurate.

EastEnders:
Spoiler alert: Now that Kat has confessed her affair to Michael, that eliminates him as her secret lover. That leaves the Branning brothers – Derek, Jack and Max – as the culprits. Kat also told her husband Alfie and they left town to work on their marriage. But when they return, Kat is confronted with all three brothers at The Vic and an invitation from one of them to meet for a rendezvous. What will she do?

Despite her keeping time with Jack, Sharon and Phil are to get engaged. She’s been a friend to him lately, but there’s nothing more going on between the ex-lovers, yet anyway, as apparently the engagement is fake. But why?

Emmerdale:
Spoiler alert: Jai sets out to attend Rachel’s baby scan, but his plans change when he runs into Gennie and Nikhil at the hospital. Since his fathering Rachel’s baby is a secret, he stays with them and misses the scan. Leaving Rachel alone and disappointed. Again.

Beginning October 15, “Emmerdale” will celebrate 40 years on the air. The anniversary week will include a live episode, a birth and a death. Take a look below at the teaser video, which might not be available in all areas.

Hollyoaks:
Spoiler alert: Even though Darren urges her to stay home and relax during her pregnancy, Nancy sneaks out to see her troubled friend Mitzeee. While visiting, she gets pains and has to be rushed to the hospital, where she goes into labor, even though she's just 26 weeks along.

Now that it's clear Walker is in town for revenge on Brendan, he targets those closest to his enemy. That includes his sister Cheryl, the man he loves Ste and his son Declan. In the end, one character won't make it out alive. Any guesses?

Home and Away:
Spoiler alert: After hurting his knee, surfer Romeo started taking steroids and now he's hooked. Not only that, but he collapses on the beach after a day of training. There might a silver lining though, as his ex-wife Indi visits him in the hospital.

When Bianca brings up her impending divorce, Heath brushes it off because he's not going to marry her anyway. It's probably not the response Bianca is looking for, especially since they have a son together. But first, they have to deal with their son's health issues. Take a look at how they're coping in the sneak peek, which might not be available in all areas.

Neighbours:
Spoiler alert: Andrew experiences headaches and blackouts and even collapses. In order to get answers, he sets up a camera to record himself and discovers he's having seizures. Upon going to the hospital, he is diagnosed with epilepsy, but keeps the news to himself. Considering he caused a recent car accident, is that such a good idea?

Though they once hated each other, Paul and Priya begin an affair in the coming weeks. Perhaps their anger is what sparks such intense chemistry. Though Priya is married, she wants to keep seeing Paul behind Ajay's back. Since this is a soap, the affair is bound to come out though with explosive consequences.

Find out whose mother is alive on "Hawaii Five-0" in Soaps.com's Primetime Spoilers. Look who was on the set of "The Fast and the Furious 6" in Soap Opera Fan's Star Gazing.