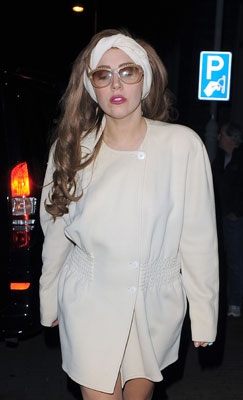 This week we’re following celebrity arrests, one hospitalization, continuation of the royal family nudie drama and a most bizarre interview.

Stodden raises eyebrows and narrows eyes.
Ex-“Guiding Light” actor Doug Hutchison’s 41 year-old looking child bride, Courtney Stodden turned 18 August 29 and since has been thrown a few XXX contracts. Though it’s unclear if she has turned any of them down, it is clear that something sure changed with age. Her face! She was seen shopping at The Grove Wednesday wearing her famous plastic stripper heels and a blood red tank-dress. She’s sporting a new hair color and has finally learned how to use a make-up brush. She looks completely different. Question is, was it plastic surgery? Here is a snapshot! What do you think?

Drug arrest.
Singer, songwriter, and possible hashish user, Fiona Apple was arrested at the border in Texas Thursday, when the substance and a little marijuana was confiscated from her tour bus.

When in Amsterdam…
Lady Gaga was blasted after lighting up a marijuana joint during her performance in Amsterdam, Netherlands recently. For those who aren’t aware, Amsterdam is what we call the ‘weed capital of the world’. John Jolly, chief executive of Blenheim CDP, offered to take Lady Gaga to one of the charity’s medical units to see the damage drugs can cause. He told the DailyMail, “I think it’s always unhelpful when people in the public eye of a particular influence are seen engaging in drug use, particularly because cannabis use is a significant problem for people under 25 in the U.K. The predominant drug we are dealing with in our treatment centers for people under 25 years old is cannabis so it’s particularly unhelpful when things like this happen.”

Baby news!
“Melissa and Joey” star and “DWTS” dancer, Melissa Joan Hart, gave birth to her third child September 18. She and hubby Mark Wilkerson have a 6 year-old boy, Mason, and a 4 year-old girl, Braydon. The couple welcomed baby boy Tucker who weighed in at eight pounds, five ounces. They gave People magazine a statement saying, “Mom and Dad are elated and can’t wait to introduce him to his brothers.” Congrats!

Tori Spelling hospitalized.
Pregnancy and birthing can come with a fair share of complications and this has been the experience of “Craft Wars” host and “Tori & Dean” star, Tori Spelling had to undergo emergency surgery due to complications from her August 30 cesarean section when birthing second son Finn. Last year Spelling was hospitalized after giving birth to 3rd child Hattie for severe migraines. A rep released a statement this week letting fans know that the actress is still in the hospital, but resting comfortably.

Amanda Bynes car impounded.
Sources say the police impounded Bynes’ vehicle after issuing her a ticket for driving with a suspended license. What did our resident ‘bad girl’ Lindsay Lohan say about this?

Why did I get put in jail and a nickelodeon star has had NO punishment(s) so far? +

Lohan later tweeted twice afterward, stating, “a “faux pas” is- An embarrassing or tactless act or remark in a social situation,” and later said, “These are the moments that I appreciate my life experiences, living without regrets and Disney for supporting me as an actress-night all*”

Meanwhile, Bynes was seen later in the week getting into a car with a driver, something maybe LiLo should have done a long time ago instead of pointing fingers or getting arrested once again for allegedly leaving the scene of an accident early Wednesday morning in down town Manhattan.

Is someone setting the actress up or did Lohan really not realize she hit someone with her SUV? Watch that surveillance video and then vote on who is the most reckless!

Rumor alert - Pattinson & Stewart reunited?
Since Soaps.com reported that Kristen Stewart cheated on "Twilight" co-star and live-in-love Robert Pattinson, it's been anyone's guess whether the two would be able to weather the storm and make it back to one another. Rumors were sparked after the two were seen in meetings together in Los Angeles. Could the two be reuniting or are the meetings professional in nature? Let's not forget that the last in the "Twilight" series is out in November and these two will have contractual obligations to adhere to.

Shaun White arrest!
Allegedly... Olympic gold medalist Shaun White was arrested after trashing his Nashville hotel room. When confronted, he was said to have run down the hallway pulling fire alarms as he went but lost his footing and went down, busting his head open in the process.

Julio Iglesias’ devastation.
Singer Julio Iglesias’ lavish home in the hills of Ojen, Spain was ravaged by a fire earlier this week when forest fires zipped through the area. Iglesias was in the Dominican Republic at the time and though the grounds are damaged and will eventually grow back, his pet dog Chaplin perished in the fire.

We've seen worse on Toddlers and Tiaras.
Jessica Simpson unwittingly created a buzz by showing off her little tyke, Maxwell Drew Johnson, in a crocheted mustard-colored bikini, and a mere days later, Kate Gosselin’s Twitter pic of her 11-year old daughter in her heels, created a stir of its own and actually angered some of her followers. Considering most little girls wear bikinis when we’re children and we certainly all tried on mum’s heels at age 11, we can only assume the issue has to do with something far more sinister...You tell us. What’s the issue?

img.ly/nkOaOh, hafta make u guess who just HAD to try on my heels that I just unpacked from my bag tonight... Starts w an 'M'! GN

Neil refused to bail on fans despite broken bones.
It's a love for his fans that’s keeping Motley Crüe singer Vince Neil from canceling his concert tour after fracturing two bones in his left foot while performing in Ohio. Don’t worry...Dr. Feelgood’s on tour and we hear he’ll "make ya feel alright!"

He said...she said...he said...
Between Dina Lohan and ex-hubby Michael Lohan, we don’t know who to believe. In a two minute clip of an interview Dina Lohan did with "Dr. Phil," which aired Monday September 17, Dina appears intoxicated. With all of the giggling and carrying on, there certainly seems to be something going on but Dina told TMZ another story. "All people saw was two minutes edited of an hour long interview. Of course they cut it to make it interesting. That’s their job. I don’t blame them for doing that. Some of the comments were taken out of context but I’m fine. I’m fine." Meanwhile, the ex-hubby thinks she was loaded. Did you have that hour to kill Monday in order to watch "Dr. Phil" to see for yourself what really went down? Leave us a message with your opinion. We missed the show.

More royal family drama...
On the heels of Prince Harry cavorting nude in Vegas, comes another no-no in the royal family. More public nudity. This time, while the Duchess of Cambridge - Kate, and hubby Prince William canoodled in France on vacation at a chateau owned by the Queen’s nephew, Lord Linley, paparazzi swarmed in to take topless photos that we hear she and the rest of the royal family are furious over. Photos have been condemned as "grotesque and totally unjustifiable" by St James's Palace. "Their royal highnesses had every expectation of privacy in the remote house. It is unthinkable that anyone should take such photographs, let alone publish them. Officials acting on behalf of their royal highnesses are consulting with lawyers to consider what options may be available to the Duke and Duchess." The French magazine editor, Laurence Pieau defended her decision to publish said photos.

Read the latest Primetime Dish to find out what's going to happen in the season premiere of "Revenge" and check out where John Travolta, George Hamilton, and Jordana Brewster were spotted in our Celebrity Sightings.