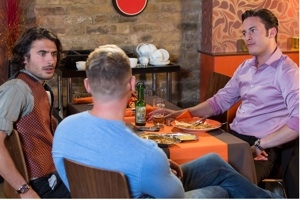 Illness, harsh realities and exes make life difficult in England and Australia. All that, plus a surprise adult daughter surfaces. Ah, the complicated lives of soap characters.

Coronation Street:
Spoiler alert: Wendy’s back and immediately becomes involved in school government, which puts her face to face with ex-lover Ken. Although shocked to see him after all these years, Wendy remains focused on the task at hand. Ken could be the one more rattled as he keeps his encounter with his ex a secret from Deirdre, who divorced him after his affair with Wendy.

After figuring out Jenna is his adult daughter, Lloyd confronts ex-lover Mandy, which leads to his offspring finding out. Mandy is understandably put on the defensive as both father and daughter attack her for keeping the secret. If Lloyd and Jenna forge a relationship, will Mandy be a part of it?

EastEnders:
Spoiler alert: After Janine leaves Michael and their child, Roxy steps in to offer the suddenly single dad support and parenting tips. Roxy is purely helping out of friendship, but it’s not out of the question on a soap for it to turn into something more.

Just as Syed becomes overwhelmed with financial issues, along comes handsome stranger Danny to listen to all his problems. But don’t forget about boyfriend Christian, who shows up just as Danny asks Syed out for a drink. All the elements are in place for a classic love triangle.

Watch as sparks fly between Max and Vanessa in the video which might not be available in all areas.

Emmerdale:
Spoiler alert: Cameron is left in charge of an under the weather Sarah, when her mom Debbie heads out with Charity. When Debbie returns, she finds Sarah unconscious and blames Cameron for not paying attention to the girl. They rush her to the hospital where they learn Sarah is developing leukemia and needs a transplant STAT. That may explain why Debbie decides to have labor induced…now.

Jai thought he had everything figured out when he convinced a pregnant Rachel to stay hidden in the out of town flat he got for her. What he didn't count on was her getting bored and lonely. She decides to return to the village and get her job back at the pub. Married Jai will just have to deal with it.

Hollyoaks:
Spoiler alert: If a fake marriage to a woman wasn't enough to come between Ste and Doug, now the couple has to contend with Ste's ex. Just as the two are about to spend the day focusing on each other, a call about Brendan interrupts them. If it's not one thing, it's another on a soap.

More trouble with third parties occurs when Jacqui spots Cindy cozying up to her husband Rhys. Things turn nasty when Jacqui confronts the girl and punches her. Is the violence justified, or is it all a big misunderstanding?

Home and Away:
Spoiler alert: Romeo is hoping for a reconciliation with Indi, who isn't quite sure she's ready to go down that road again. Not to mention, she's growing close to hottie Liam. A fact that doesn't go unnoticed by Romeo.

As if Heath and Bianca didn't have enough issues between them, their baby becomes critically ill. Scared for her son, Bianca lashes out at the unreliable Heath, causing him to flee. Not exactly helping your case Heath.

Watch the video, which might not be available in all areas, of the first few mintues of Wednesday's episode, as Liam finds a drunk Sid on the side of the road.

Neighbours:
Spoiler alert: When Priya receives support from Paul, instead of her husband Ajay, in regards to her abilities as school principal, she starts to see her perceived enemy in a new light. She's so moved, she leans in for a kiss with Paul. Will she give in to temptation or stay strong and fight the feeling?

After injuring his hand while saving the teens after the car crash, Rhys learns he has a slim chance of regaining full use of his hand. Not the news a surgeon hopes to hear.

Find out who makes a confession on "The Young and the Restless" in Soaps.com's Soaps Spoiler Digest. Think celebrities hang out with their kids in sweats and t-shirts? Think again. Keep up with the style of moms Sarah Jessica Parker, Victoria Beckham and Jessica Simpson in Soap Opera Fan's Star Gazing.