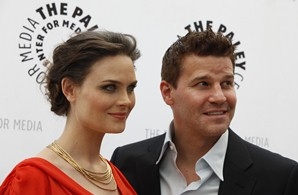 Primetime TV is picking up this week with season openers, the return of many comedy shows and a few new pilot episodes. Don’t forget to finish off the week with the 64th Annual Primetime Emmy Awards on Sunday September 23, at 8:00 PM on ABC.

Alphas: Falling.
John meets the parents, Hicks’ son visits and Rosen has to deal with mole Monday September 17, at 8:00 PM on SyFy.

Boardwalk Empire: Spaghetti & Coffee.
Eli is out of jail and is having a falling out with his new boss and Rosetti works a new route Sunday September 23, at 9:00 PM on HBO.

Bones: The Future in the Past.
Season 8 opens and Brennan is still on the run while the Jeffersonian team works to clear her name. An anonymous tip leads them to a body and closer to the truth Monday September 17, at 8:00 PM on FOX.

Boss: Backflash.
Kane has a riot on his hands trying to deal with the housing project and decisions to make regarding his treatment Friday September 21, at 9:00 PM on STARZ.

Covert Affairs: Let’s Dance.
It’s the mid-season finale and Annie is dealing with the reality of Lena Smith’s destruction in her life Tuesday September 18, at 10:00 PM on USA.

Glee: Britney 2.0.
Brody helps Rachel in NY and Brittany looks to Britney Spears’ music to snap out of it Thursday September 20, at 9:00 PM on FOX. Watch for Soaps.com’s Gleecaps which are posted after the show.

Haven: 301.
Odd events are going on and the town could experience more disappearances as Nathan and Duke search for Audrey Friday September 21, at 10:00 PM on Syfy.

The L.A. Complex: Make It Right and Now or Never.
Sabrina confesses this week in ‘Make It Right’ and Kal receives bad news in ‘Now or Never’ when back-to-back episodes air Monday September 17, at 8:00 PM and 9:00 PM on CW.

Major Crimes: Out of Bounds.
Raydor takes a chance on her career and on Sykes’ life. Rusty is not interested in a family reunion with his biological dad Monday September 17, at 9:00 PM on TNT.

The Mob Doctor: Pilot Episode.
This new show is about a surgeon working for the Chicago Mafia to keep her brother alive. Paying for his debts may cost the life of another on her operating table. Preview Monday September 17, at 9:00 PM on FOX.

The New Normal: Baby Clothes.
Soaps.com finds that returning baby clothes is no easy task for the guys this Monday September 17, at 10:00 PM on NBC.

The Office: New Guys.
It’s the ninth and final season. New employees arrive, bringing with them a familiarity of two current employees. A pet rescue and pet adoption are office news Thursday September 20, at 9:00 PM on NBC.

Parenthood: Left Field.
Victor gets some loving from Julia while Crosby and Joy work on their marriage Tuesday September 18, at 10:00 PM on NBC.

Perception: Light.
Part two of the Season 1 finale brings new evidence that Pierce's theory might be correct Monday September 17, at 10:00 PM on TNT.

Revolution: Pilot Episode.
Sci-fi comes to NBC with this new post-apocalyptic series. The pilot episode is directed by Jon Favreau who directed "Iron Man." Preview this Monday September 17, at 10:00 PM.

Royal Pains: Sand Legs.
It's the Season 4 finale that closes with another mystery ailment with a volley player this time and Divya has a mystery of her own after hooking up with Rafa. "Royal Pains" airs Wednesday September 19, at 9:00 PM on USA.

Strike Back:
A political leader in a Zimbabwe prison gets help from Knox to escape but the team is on the lookout Friday September 21, at 10:00 PM on Cinemax.

Switched at Birth: The Shock of Being Seen.
Bay takes advantage of both of her dads. Daphne gets too close to her boss Monday September 17, at 8:00 PM on ABCFAM.

Up All Night: Friendships & Partnerships.
Ava's show gets canceled, which puts her friendship with Reagan to the test. Also, Regan hires her brother Scott to help renovate their bathrom. Watch this Thursday September 20, at 8:30 PM on NBC.

Warehouse 13: Second Chance.
While Pete and Myka try to track down an artifact that will cause people to actually rust to death, Claudia and Steve try to find out how to separate from the metronome artifact that has been keeping Steve alive. Show's on at Monday September 17, at 9:00 PM on SyFy.

White Collar: Vested Interest.
An FBI conference is not safe from a thief looking for valuable goods September 18, at 9:00 PM.

Visit the Primetime Dish for a Soaps.com scoop on "Bones" and the return of "90210." Meanwhile Viggo Mortensen and news on Ryan Reynolds is featured on Soap Opera Fan’s Star Gazing.