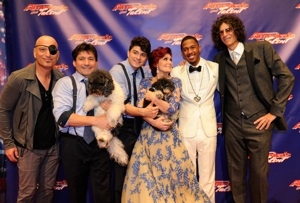 Season finales, season premieres and feuds. Soaps.com has the lowdown on your favorite guilty pleasures.

America’s Got Talent:
The season seven winner of “America’s Got Talent” was chosen on September 13. After watching sand painters, comedians, kids and an earth harpist, America decided dogs were deserving of their very own show in Vegas. Yes, the Olate Dogs, and their trainers of course, are the best America has to offer. Would you pay to see them?

America’s Next Top Model:
Director/actor Tyler Perry (“Madea’s Witness Protection”) pays the girls a visit on tonight’s episode to school them in the art of acting. The wannabe models must do as he instructs via an earpiece while out in public. You know what they say, acting is all about committing. In this case, it seems they’re committing to looking like fools. Take a look.

Bachelor Pad:
On the season finale of the dating show rejects' dating show, Tony popped the question to fellow contestant Blakeley. How did the broke single dad afford the 2.5-carat Neil Lane sparkler he put on her finger? While ABC and Neil Lane declined to comment, it smacks of product placement. Staged ring, staged engagement?

The Bachelor:
The Internet doesn't keep secrets, especially when Reality Steve is involved. The king of reality show spoilers revealed the next man looking for love (lust?) on the upcoming season of "The Bachelor" will be Sean Lowe, "The Bachelorette" season 8 castoff.

Dancing with the Stars:
Calling all "DWTS" bloggers! ABC is looking for the ultimate fan blogger. The competition starts in key ABC markets and ends at the finale of the All Star season. For all the details go to DWTS Blog Contest.

Hell's Kitchen:
Philadelphia chef Christina Wilson won the coveted spot of head chef at Gordon Ramsay's Steak at the Paris Hotel in Las Vegas. Upon winning, Wilson said, "Feeling the door open was one of those moments I want to hold onto for life. I am so proud of my team for breaking their backs during prep and service. Despite our differences throughout the season, I honestly couldn't have picked a better crew. A huge thank you to Robyn, Kimmie, Patrick and my bestie, Dana! After the most intense months of my life...I am Vegas-Bound!" So, now, after catching the "America's Got Talent" winner's show, reality TV fans can walk down the strip for a bite to eat from another reality star.

Honey Boo Boo/Keeping Up With the Kardashians:
Kris Jenner vs. Honey Boo Boo? It appears to be the latest reality TV feud as "reliable sources" say Jenner thinks Boo Boo's family is classless and that her mom is exploiting her for money. Uh…pot meet kettle? But it seems Honey Boo Boo has one famous fan in RuPaul, who wants her for a duet on his record. Sounds like a match made in heaven.

MasterChef:
The season three contestant deemed worthy of Gordon Ramsay was Christine Ha, who by the way is blind. Of Ha, Ramsay said, "Christine has the most extraordinary palate, and she really elevated the competition by conceptualizing and executing the most stunning dishes. Next season's competition has quite an act to follow!" With the latest MasterChef crowned, it's already on to season 4. Open casting calls have gone out so if you think you have what it takes go to MasterChef Casting.

The Real Housewives of Atlanta:
Nene Leakes' "The New Normal" premiered on September 11 on NBC. She plays the wisecracking assistant to one half of the gay couple using a surrogate. The role is not unlike the wisecracking swim coach on "Glee," but fun nonetheless. Of the support she's received in her career Leakes tweeted:

I just wanna take a moment & say Thank U 2 all of u who hav been supporting me through this journey! I'am so grateful! I love u all

The Voice:
Keith Urban won't be back in the chair for the next season of Australia's singing competition. He cites his commitment to recording and promoting his new album as the reason, but others are speculating he is jumping ship to join "American Idol." Time will tell what the real reason is.

Someone's finding religion on "The LA Complex." Find out who in Soaps.com's Primetime Dish. Read about Jessica Alba and her daughter's day out in Soap Opera Fan's Blog's Star Gazing.