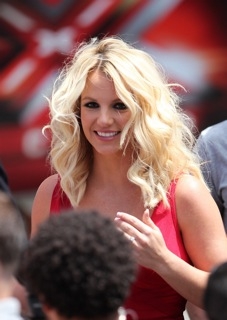 This week’s Celebrity Gossip finds the stars shedding the pounds, gaining a new co-host, and yet more Tom Cruise drama!

Comedy team divorcing.
Sadly, it was confirmed by a rep for Amy Poehler and Will Arnett that after 9 years of marriage, the couple, who have two children, Archie and Abel, are divorcing. The split is said to be amicable.

Did Britney Spears almost quit X-Factor on the first day!?
TMZ is reporting that “X-Factor” judge Britney Spears almost quit on the first day! As the highest paid star for the show, Britney showed up and immediately began to have a panic attack, Simon Cowell said. “No one is going to admit that on the first day your highest paid star after twenty minutes has walked off set. [Britney] had a moment on the first day where she said to me ‘I’m not sure I can do this.'” Cowell is claiming that he persuaded Britney to continue with the show, where she has become one of the most anticipated appearances and has been molded into an excellent judge, and has even grown to love the job. “X-Factor” debuts on September 12, up against rival “The Voice.”

The Wanted might show up naked to the MTV VMAs!
MTV News is reporting that boy band The Wanted might show up sans clothing to the 2012 MTV Video Music Awards on September 6, hoping to beat out competitors such as One Direction, Carly Rae Jepsen, and Frank Ocean for the Best New Artist Award. The boy band says that if they do, in fact beat out the competition, they may even be too excited to give a proper acceptance speech. When MTV News sat down with the group, they showed just how enthusiastic they were, telling MTV that they will also be on hand presenters when the VMAs air live from the Staples Center in Los Angeles, California. When they were asked to practice their speech, the group decided not to practice at all, but rather jump up and down, throwing their arms in the air. Band member Sive Kaneswaran stated, “I think we should just wear nothing. Like, win or lose, we should be totally naked.” Jay McGuiness, also a member of the group, went on to add, “Anything for a bit of press.”

Country star Kellie Pickler pulls a ‘Britney’!
Kellie Pickler has pulled a Britney Spears-but for a good cause! The country singer has shaved her head in support of her friend, Summer Holt Miller, who was diagnosed with cancer in June. The Daily News is reporting that the “American Idol” alum debuted her new hairdo on “Good Morning America” on September 5. Pickler has stated that “Cancer does not discriminate,” and, taking to Twitter, said “this is one of the best days of my life.” Miller, who has a history of cancer in her family, has been declared cancer-free in August, and will undergo chemotherapy so the cancer will not come back. Miller also talked about Pickler’s act stating, “If this compels even one person to change their mentality toward waiting until the age of 40 for their mammogram, then it will be worth it.” Click below to watch the video on “Good Morning America:”

Jessica Simpson: From Daisy Dukes to Weight Watchers:
Starpulse is reporting that Weight Watchers spokesperson Jessica Simpson has recently admitted that she has been struggling to lose weight post-pregnancy. The popstar, who gave birth to daughter Maxwell in May, has said that the size of her breasts is what is keeping her from exercise, claiming that she cannot run and can only exercise with slow-paced walks. “I let myself indulge in everything I wanted because it was the first time I was ever pregnant, and I wanted to enjoy it,” she told “USA Today.” “I wanted to be happy and eat what I wanted. I didn’t realize [the weight] didn’t all come off with the baby…” Simpson has also enjoyed taking baby Maxwell out with fiancé, Eric Johnson, as a way to bond with her new family and exercise at the same time. Simpson, who signed onto Weight Watchers in December, is not off to a good start, having lost barely any weight since the deal was struck. “My weight has always been something that people like to comment on… Nobody wants to talk about their weight. For me, I have had to come to a place where I am comfortable with myself,” she says.

Taylor Swift’s ‘Never Ever Getting Back Together’ guy revealed!
Entertainment Weekly is reporting that Taylor Swift’s new single, “We Are Never Ever Getting Back Together” is about former boyfriend Jake Gyllenhaal! A valid source who was close to the couple told US Weekly that “it’s definitely about Jake.” Many clues point to Gyllenhaal as the potential candidate. In the video, just released last week, the guy wears a button down navy blue vest, similar to one Gyllenhaal wore on a date with Swift. Also, Swift wears a bracelet very similar to the $100,000 bracelet that Gyllenhaal was rumored to have given her for her birthday. The final clue would be the guy that was chosen to play Swift’s ex in the video-he’s a dead ringer for Gyllenhaal! But what do you think? Do you think the song is really about Gyllenhaal and Swift’s relationship, or do you think it’s a cover for the real culprit? Post your comments below!

Christopher Nolan sues agents over Dark Knight profits!
“The Dark Knight Rises” director Christopher Nolan is suing agents over profits for the box office success. TMZ is reporting that Nolan and his wife, producer Emma Thomas, have recently filed a lawsuit, claiming that former and current agents want millions in commissions from the movie. Nolan and Thomas filed the lawsuit on September 6 in Los Angeles, California, where his current agency, WME, is trying to stake claim over profits for the film. To add fuel to the fire, Nolan’s former agency, CAA, is seeking profits from past deals. According to the lawsuit, both Nolan and Thomas are willing to pay commissions that may be owed, but would like the court to decide who gets the money.

Kanye West adds Kim Kardashian sex tape rap to his list:
TMZ is reporting that rapper Kanye West has something new to rap about: his sex tape with girlfriend Kim Kardashian! West, who has finally spoken up about the tape, is nothing but proud of his “perfect bitch.” The new single, ‘Clique,’ from his upcoming album “Cruel Summer,” West fires back at all skeptics on his relationship with Kardashian saying, “Eat breakfast at Gucci. My girl a superstar all from a home movie.” The sex tape, “Kim Kardashian: Superstar,” which is referenced in the song, is one of the best-selling sex tapes of all time.

Have Scientologists turned Connor and Isabella Cruise against their mother, Nicole Kidman?!
US Weekly is reporting that the Church of Scientology has turned both Connor and Isabella Cruise against their mother, Nicole Kidman, who were just 8 and 6 years old, respectively, when parents Tom Cruise and Nicole Kidman divorced in 2001 after 11 years together. "The central problem [in the marriage] was Nicole did not want to deal with Scientology," former high-ranking Scientologist Marty Rathbun told Vanity Fair magazine. Kidman, who left the church when she and Cruise divorced, was then labeled a Supressive Person, a spiritually toxic person to be avoided, with members of the Church quietly instilling this idea into the kids. Another source, John Brosseau, told 'US' that the "Scientology world hated Nicole. People in Sea Org were mandated to see every freaking Tom Cruise movie that came out. But if you ever mentioned an inkling to see a movie with Nicole, oh my God, you'd hear about it." Cruise’s third wife, Katie Holmes, has recently filed for divorce from the actor as well, with much speculation about the play of Scientology in the marriage.

Actress Amanda Bynes charged with hit-and-run:
TMZ is reporting that actress Amanda Bynes has been charged with two counts of hit-and-run, after allegedly smashing into cars and leaving the scene of the crime not once, but twice! If Bynes is convicted, she could be looking at up to a year in the slammer. Bynes' case from April has recently been reopened, following her recent hit-and-run situation. She is due to appear in court on September 27, and calls to Bynes' lawyers were not immediately returned.

Strahan makes his Live! with Kelly debut:
As previously reported on Soaps.com, Kelly Ripa's co-host was to be revealed on September 4, ending speculation since Regis Philbin retired. On the "Live! With Kelly" episode that aired September 4, Ripa had revealed that "we finally have our guy...It gives me great pleasure to introduce the newest member of our 'Live!' family. We are honored to have him-Michael Strahan!" Now the show will be called "Live! With Kelly and Michael," and if the ratings are any indication of how the audience has reacted to Strahan, the now newly title "Live!" will be a success. Click below to watch Strahan's announcement as co-host:

Did Katie Holmes audition to be Tom Cruises' wife?!
Mercury News is reporting that the Church of Scientology held auditions when Tom Cruise and Katie Holmes were married. The church has responded back, stating that the entire story is "hogwash." The story in Vanity Fair first went live on September 1, in which it accused church leaders of secretly auditioning women to be Cruise's girlfriend. Candidates who fit the Church's criteria were initially taped answering questions about the actor, and agreements were signed in which the women were flown to New York, and weeks later, had taken up residence with Cruise. According to a source for US Weekly, the church has "been denying this ridiculous tale now since it first appeared in print four years ago." Rumor has it that there could be a potential monetary reason behind all the rumors, as anti-Scientology stories pay big money. What do you think? Post your comments below!